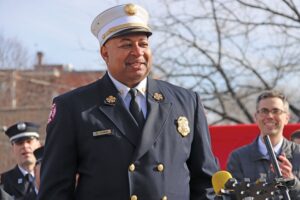 So many changes, so few column inches

What a year this has been for Lake Street! I have to warn you right at the start, there is no way we can cover everything new and different since April 2021 along South Minneapolis’s most vital street. It’s just too much. We’ll mostly concentrate on the sites between the crossing with Chicago Avenue on the west and the business hub from Minnehaha Avenue to the East Lake Library on the east. And even then, apologies if we neglected to mention your business or your favorite spot.

Because it’s the biggest story, we have to start geographically in the
middle. As it celebrates its 40th year, the Midtown Farmers Market (MFM) is moving back “home.” We spoke recently with Keeya Allen, the manager of MFM, about the coming changes.
The 2019, 2020 and 2021 seasons of the market saw it taking place in the lot to the north of the building that houses Moon Palace Books, Geek Love Cafe and Arbeiter Brewing on the block of Minnehaha Avenue just south of Lake. The latter two of those years were further disrupted by the pandemic, although being an outdoor source of vital food, farmers’ markets thrived (relatively) during that time. But also, this location, more than any other, even on Lake Street, was impacted by the George Floyd uprising, as the police precinct building just yards away was burned to the ground in late May of 2020, and the market site temporarily became a mutual aid food distribution site during the ensuing crisis. 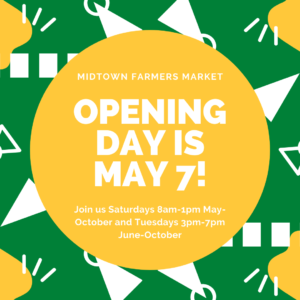 Now the market will be back to more or less where it was, at 2225 E. Lake St. In the interim, new housing and the Hennepin County South Minneapolis Human Service Center were built in the area, and along with them, a dedicated green space destined to be the permanent home of the MFM. This space, which also includes benches, walkways and a new playground, is managed by the Minneapolis Park and Recreation Board.
The market’s grand re-opening will be May 7, 2022. The hours and days for the 2022 season are Saturdays, May 7 through Oct. 29, from 8 a.m. to 1 p.m., and Tuesdays, June 7 through Oct. 25, from 3 p.m. to 7 p.m. (6 p.m. in October. The market will also be closed Tuesday, July 5.)
What will the market be like in its new/old location? Better, but not that different. Many of the same longtime produce, meat, dairy and plant vendors will be back. Food trucks and vendors of ready-to-eat food will include the old favorites, Kabomelette and Krishna’s Delight. Decisions about live music are still pending, but now the MFM has a resident DJ.
Baked goods will be provided by Blue Ox and Winter Goddess Foods. Coffee and other drinks will be provided by Curioso, RISE and Stepwise coffee companies. Parking on surrounding streets will be plentiful, or you can take a bus or LRT. Secure bike parking is also provided, along with comfortable places to relax between shopping bouts and watch your kids play at the playground. If you can make it on opening day, it’s sure to be celebratory, and also dominated by starter plants for your garden just when you need them. 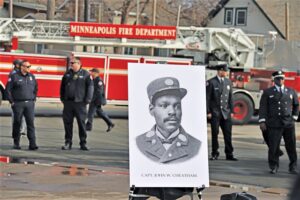 Developments around the Lake and Minnehaha hub

There is a lot of rebuilding and relocating going on around the Lake Street section from Minnehaha Avenue to 31st Avenue. This was one of the most damaged areas in the civil unrest accompanying the George Floyd Uprising, with many entire buildings destroyed, and even the library heavily vandalized.
Speaking of the library, Hennepin County libraries are finally back to being completely open as before the pandemic, with all services, including computer usage and meeting rooms, restored. I can’t wait to have a boring old meeting in one of the library system’s lovely rent-free meeting spaces. The one at the East Lake Library is especially nice on a sunny but cool day, as it’s in a large room right on Lake Street that is glass-walled and mostly windows.
The site of U.S. Bank branch (2800 E. Lake St.) that was heavily damaged was donated in 2021 to the community organization Seward Redesign. Along with the POC-owned architectural firm of 4RM+ULA, Seward Redesign will redevelop the site as a combination of office space for various nonprofits, affordable housing and other community-enriching programs.
Another great development in this area is the recent renaming of the former Dight Avenue. This avenue was named for a famous (or, more accurately, infamous) Minneapolis doctor, University of Minnesota professor and city alderman. Additionally, he was the founder of a eugenics society, author of a forced sterilization law in force in Minnesota for decades, and a person who wrote fan mail to Adolf Hitler.
The roadway is now called Cheatham Avenue, after Minneapolis fire chief Capt. John Cheatham. Cheatham was born in slavery in 1855, and his newly-free family migrated to Minneapolis from Missouri when he was a boy. He was appointed to the fire service in 1888, and achieved the rank of captain in 1899. He owned a home and raised a family in Minneapolis, and from 1907 until his retirement was chief of an all-African-American auxiliary fire house at 45th Street and Hiawatha. He died in 1918 from a chronic disease. There was not another Black fire chief in Minneapolis until Bryan Tyner, who presided over the renaming ceremony, was appointed in the 1990s.
Be sure and check back with Southside Pride in May for the Spring on Minnehaha Avenue article where we will cover more of the rebuilding and other new sites of interest in the Lake and Minnehaha area. 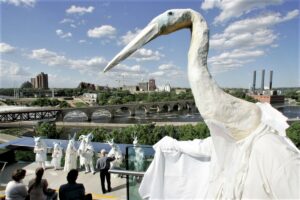 Developments around the Lake and Bloomington hub

Although it appears quiet, with shows few and far between and staff greatly reduced and working remotely, In the Heart of the Beast is still alive within the Avalon Theater on the corner of 15th Avenue and East Lake Street. Check out their website at hobt.org to see who is on the board of directors, and who the current directors and staff are, and what upcoming events might be. There have been very intentional, very big changes all through the organization in the past two years.
Is there going to be a MayDay Parade and Celebration in Powderhorn Park this year? Well, no, but there is going to be a MayDay celebration this year. However, it’s without a parade and not confined to the park. MayDay has been re-envisioned:
“This May HOBT and our MayDay Council is partnering with three local organizations to bring you this MayDay Season, multiple celebrations throughout the month of May. We cannot wait to welcome you to these celebrations!” 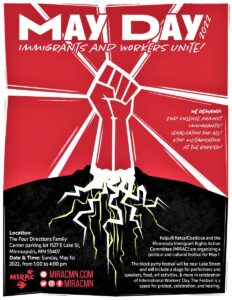 MayDay Season 2022 is led by Roosevelt High School, MIGIZI (a Native-American-led youth and communications nonprofit) and Kalpulli KetzalCoatlicue (a local Aztec-style dance troupe). Additional work on MayDay Season 2022 is from the Minnesota Immigrant Rights Coalition (MIRAC) and the youth of El Colegio, a nonprofit charter high school. The May 1 celebration will take place at the Four Directions Family Center (in the parking lot) at 1527 E. Lake St.

Developments around the Lake and Chicago hub

Although we will cover Midtown Global Market (MGM) more thoroughly in the piece dedicated to them in October, we should mention a few developments there. One is that the longtime market manager resigned over a month ago and the last we heard has not been replaced yet.
Foot traffic and sales are still down considerably at MGM, mainly because the Allina Commons staff, which traditionally made up a big part of their customer base, is still largely working remotely. So please do support your favorite MGM vendors. Many of the food vendors have delivery options through such platforms as Bite Squad or GrubHub. You can get food delivered from the excellent small grocery store, the Produce Exchange, by Mercato (sign up at mercato.com). Some other small merchants offer delivery through the Target-owned service Shipt (shipt.com).
And don’t forget, the MGM has events, which are back in a big way now that the omicron wave is on the retreat and social distancing rules are relaxing. Some are recurring, like Saturday Sounds, a rotation of live music acts every Saturday from noon to 2 p.m. And on Friday, April 8, the very popular Roe Family Singers will perform for Family Friday night from 5 to 7 p.m.