Swamp Creatures rise from the dead 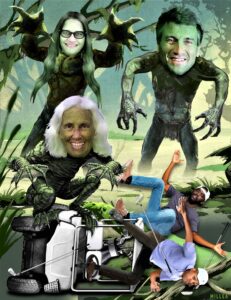 Just when you thought you were safe on dry land, the Swamp Creatures rise from the dead and take you back into the muck.
Last year was a painful and exhausting struggle. After months of arguing, the Minneapolis Park Board voted 5-4 to not flood the Hiawatha Golf Course. Now, a new Park Board wants to re-visit that decision:
“RESOLVED, That the Board of Commissioners authorizes the reconsideration of Resolution 2021-249 related to the Hiawatha Golf Course Area Master Plan and directs staff to organize a Public Hearing before the Planning Committee of the Board of Commissioners on April 20, 2022.”
I wrote to the Board:
“I grew up a block from Lake Hiawatha. The lake was five feet lower then, than it is now. On dry days in August, you could walk through the storm tunnel off the Second Fairway all the way to 31st Street. On the Fourth of July we threw cherry bombs into the mouth of the tunnel, and it sounded like cannon fire.
“That changed in 1964 when (according to the story believed in South Minneapolis) Vice President Humphrey wanted to please his boss, LBJ, with the sight of a full-flowing Minnehaha Falls—even though the creek was low at that time of year and there wasn’t much water. So, he got the U.S. Army Corps of Engineers to back it up with the dam/weir at 27th Avenue to guarantee a good supply of water for the president’s visit. LBJ never came to see the Falls, and we’re stuck with the unintended consequences.
“It wouldn’t need to cost $43 million to restore Lake Hiawatha to its natural state. All that’s really needed is for the Board to ask President Meg Forney to make three phone calls. She should call Senator Tina’s office (I think they’re neighbors) and ask her to tell the U.S. Army Corps of Engineers to take back their dam/weir. They built it. It’s flooding the area. They should remove it.
“Second, she should call Gov. Walz and ask him to direct Charlie Zelle, the chair of the Metropolitan Council, to prop up the interceptor sewer pipe that is holding back nearly five feet of water because we want to restore Minnehaha Creek to its original channel and stop the flooding, so we’re going to run the creek under the pipe. We want the Metropolitan Council to build a bridge to support the interceptor sanitary pipe, and build a footbridge on top of it to make it useful and decorative.
“Third, after the flooding has stopped and the water level of the lake has gone down 4.5 to 5 feet, the lake is going to be very shallow with piles of sand. That sand is the sand the City of Minneapolis has spread on the streets every winter for the past 80 years. It has found its way through storm gutters from 31st Street to 43rd Street, from Chicago Avenue over to 26th Avenue. So, for her third call, President Meg should call Mayor Frey and ask him to come and get his sand out of our lake. The city should pay to dredge the sand from the lake. They put it there. They’re responsible for it.
“If President Meg does all that she will have restored Lake Hiawatha and Minnehaha Creek, and all it would cost the Park Board is three phone calls. (Don’t worry that the Falls would lose its glamor. There’s another dam/weir at 34th Avenue that holds back enough water to guarantee a full flow even in the dry months of July and August.)
“Before undertaking a major expense and a huge project, wouldn’t it be prudent and smart to first make three phone calls?”
In 2020 the Park Board staff estimated The Plan would cost $43 million—possibly minus 25% or plus 50%—so, the total could be $32 million to $64 million. Realistically, the high end could go as high as $80 million.
If they got rid of the dam/weir at 27th Avenue and the metropolitan sanitary interceptor, they could lower the water level of Lake Hiawatha by 4.5 to 5 feet. 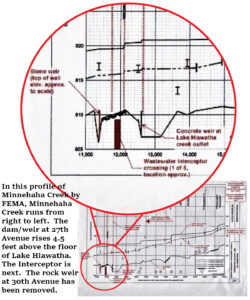 The area of Lake Hiawatha is 53.5 acres. If we lowered the lake by 4.5 feet, that would mean eliminating 10,487,070 cubic feet of water, or 78,448,731 gallons—almost 80 million gallons of water would be sent over the Falls to the Mississippi River. Actually, it would be much higher than 80 million gallons of water. It would drain the surface water table that has been flooding neighborhood basements. It could probably eliminate pumping altogether.
But why do that, when for $43 million you can turn it into a swamp?
Michael Schroeder, the chief architect of The Plan, said in a memo to board members, “While they stress the need for retaining 18 holes on a historic basis, they have offered no alternatives to the ground water pumping issues that underline the need for a new direction on the property.”
In 2015, Barr Engineering was hired by the Park Board to study flooding and Minnehaha Creek. They concluded that removing the dam/weir at 27th Avenue could lower the water level of Lake Hiawatha by one to two feet, which would in turn lower the groundwater elevation beneath the course considerably. [They didn’t consider the creek running under the interceptor pipe that could lower the water level another 3.5 to 4 feet.] Section 10.4 (page 46) of the Feb. 28, 2017, Barr Report concludes: “The pumping of surface groundwater from the golf course to Lake Hiawatha was not impacting the deep groundwater aquifers in the region, but rather, just recirculating the surface groundwater in flows from the golf course ponds to Lake Hiawatha and back. Although energy intensive, the existing pumping is likely having minimal ecological impact.” A former hydrogeologist at Barr says Schroeder has distorted the meaning of the Barr Report—“He makes shit up.”
In 2011 when the city and Park Board installed a storm sewer that drains into the northwest portion of the course at an elevation two feet lower than Lake Hiawatha, they understood that stormwater would need to be pumped. It was part of the city and Park Board’s engineered design. The current pumping was never constructed to dewater the course, and the Park Board’s consultant concluded that dewatering has no ecological impact; however, Michael Schroeder continues to spin the information Barr produced, after he created a narrative that pits neighbors against each other by attempting to make this into some sort of environmental issue.
Schroeder wants to stop the pumping. He says we’re over our limit. He says the state will close it down. The reality is that Hiawatha has a dewatering permit that allows the golf course to pump up to 400 million gallons of water from the golf course per year. The DNR just wants the Park Board to figure out a plan and apply for a permit that reflects whatever plan they decide on. The DNR doesn’t really care as long as there are no “ecological impacts.”
So, why does Schroeder want to stop pumping and flood the course?
Hiawatha shares the golf course with a program of cross-country skiing in winter, run by R.T. Rybak’s Loppet. Over the last 10 years, the Loppet has lost over $3 million.
The Loppet is looking forward to the flooding of the golf course because the artificial snow-making machine they’re planning for 47th Street and Longfellow will require pumping of at least 14 million gallons of water. Flooding will also make the ground freeze faster and smooth out the rough spots.
The exalted sense of white privilege and lack of concern for other people’s money in this plan has R.T. Rybak written all over it, and Board President Meg Forney and Steffanie Musich (the commissioner for the district) are happy to carry water for him.
If you are concerned about the future of Lake Hiawatha and Minnehaha Creek, please attend the Park Board public hearing on April 20.