After two years of disease and destruction, Hennepin Avenue is beginning to recover (mostly) 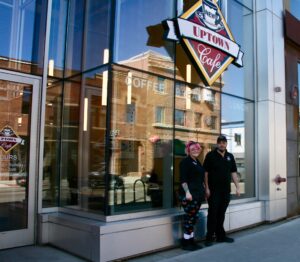 Hennepin Avenue has changed a lot over the years. In the beginning, the neighborhood was focused on the local lake, with weekend homes for those who could afford it. in the 1970s it was a neighborhood of artists and small businesses catering to a younger crowd. Uptown changed again when national chains began replacing the trendy locally-owned shops.
Then came COVID-19, and a significant drop in business. More troubles followed. On June 21, 2020, after the unrest surrounding George Floyd’s murder but apparently unrelated to it, 11 people were wounded in a shooting in front of a restaurant on the 2900 block of Hennepin. In 2021, the neighborhood again experienced civil unrest after law enforcement officers shot and killed a young Black man named Winston Smith in an Uptown parking garage. Demonstrators took over the street, blocking intersections. Peaceful protests were followed by threatening graffiti, looting and arson. A woman named Deona Knajdek was killed when a man rammed his car into a group of demonstrators.
The combination of pandemic and increasing violence changed Hennepin Avenue. Several businesses closed or moved to safer locations. Juut Salonspa, in the area for 36 years, boarded up and closed, due to “continued escalation of crime and violence in our neighborhood,” according to owner David Wagner. So did other longtime businesses, including John Fluevog Shoes, known for high fashion footwear.
The Uptown Theatre at 2906 Hennepin Ave., which first opened in 1916, and in recent years was known for showing art and cult films such as “The Rocky Horror Picture Show,” also closed. But there are plans to renovate the theater into a performance venue with a 2,500-seat capacity, without altering its historic architecture.
Other businesses still call Hennepin Avenue their home.
Familia Skateshop, at 2833 Hennepin, is staying. They sell skateboards and related equipment and accessories. Kirian Stone, an employee since 2016, said that when COVID hit, the store went to online sales only, with curbside delivery.
Then came the riots. “Our store was broken into and looted. It was a big setback and hurt our morale,” Stone said. “But we’re fortunate to have a strong skateboarding community. Between the pandemic and the angst during the riots, we were on edge. There were the civil protests and then the opposite when people started coming into the city and taking advantage of the situation. We were all feeling vulnerable.”
As a person of color, Stone said civil protests gave him some insight about social justice issues. But, he said, “I’m part of this small business and I became aware of the other ramifications of this.”
“It took a little while to open up, but it seems that more life is coming back to the area,” he said. “It’s starting to feel more normal. And the store invested in a security camera as a preventative measure.” The store is again open for indoor shopping. 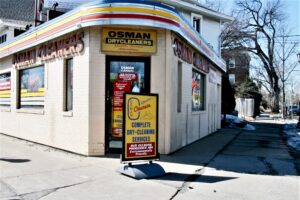 Osman Cleaners, at 2500 Hennepin, is family-owned and operated so they faced no worker restrictions during the pandemic. And, since dry cleaners were deemed essential, they remained open during the lockdown. “We didn’t have a lot of business,” said Mumtaz Osman. While there wasn’t much cleaning demand for business attire, “some of our customers work at the hospital, also essential. We had to keep the doors open, but it was a hard time.”
Then the civil unrest happened. “This was nothing like the COVID lockdown,” Osman said. “The first few days, it was the worst. The whole first night we were inside, guarding. We had people’s clothing that could have been stolen. We did have one broken window the day after the looting, but we consider ourselves lucky. Nothing was stolen.”
Even Osman’s kids – one as young as 10th grade – helped guard the store. “Two days later, more of our windows were broken but compared to some, we were lucky. We saw what was happening – the looting and the cars without license plates. That first night, it was not only us. We are near apartment buildings and an elderly couple who lived there came down, so scared. This was around 4:30 in the morning. We called 911 and no one responded. I smelled the chemicals, probably kerosene, from a fire on the roof of the apartment building. Finally, 911 picked up. The responder said that there were fires all around. ‘We cannot come,’ they said. ‘Stay away from the fire.’”
One of Osman’s neighbors went to the roof and put out the fire. “It was a good thing that the fire got contained,” she said, “or people might have died.”
“I am from India. I have seen these things before, but I never thought we’d see this here. I have seen the Babri Mosque demolition,” Osman said, referencing the 1992 destruction of a historic mosque by extremists. “What I saw on Hennepin gave me a flashback. Here, thank God, we had only property damage and not people being killed.”
The day after the unrest, people were out assisting with the cleanup. “You always have to look on the bright side,” Osman said. “The neighborhood came together to help each other. We were there if anyone wanted to come out and talk and we opened the next day. I thank the neighbors and our customers.” 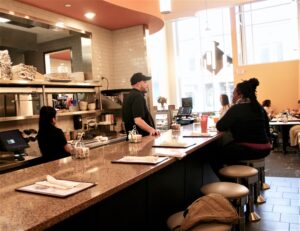 Inside the New Uptown Cafe

The New Uptown Cafe
The Original Uptown Diner was a Hennepin Avenue icon and chances are good that the brand-new New Uptown Cafe, located in the same location at 3008 Hennepin, will become a go-to place for diner food. The original Uptown Diner opened in 1992 and moved to 28th and Hennepin in 2003. The New Uptown opened in March and is welcoming eager patrons.
Tony Skubal worked at the original Uptown for 18 years before pursuing his vision to create a place for people to enjoy good food and art. The ceiling in the old space was opened up to let in the sunlight. Works by local artists decorate the walls. “There’s been a lot of trauma but we can move forward. It’s time to shed the negativity,” Skubal said. “We want to be a happy presence in the neighborhood.”
Before COVID, Skubal said, rents went up and small businesses were driven out. “Then everything hit the fan and the big chains ran away. People need to support small businesses.”
Skubal’s menu takes diner food upscale. Breakfast and lunch choices include standards like omelets, burgers and clubhouse sandwiches, but also items like a gyro omelet with spinach, Swiss cheese and tzatziki sauce. There’s the Southern classic, country fried steak and eggs, a catfish breakfast and a crab cake Benedict.
Dani Rauton is the assistant manager and Skubal’s business partner. Rauton came to Minneapolis in 2003 and began working at the original Uptown Diner. Some places weren’t interested in hiring her, Rauton said – she has several tattoos and her hair is a vibrant color not usually found in nature. But in Uptown she found a family.
After the 2021 shootings, Rauton feared that people would abandon Uptown but that didn’t happen. Instead, people wanted to return to the restaurant. Rauton tried to let people know they could still come to the neighborhood and stroll the streets. “I still waitress and cook,” she said. “But I definitely talk to people and work with the community.” 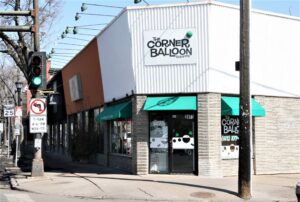 The Corner Balloon Shoppe at Hennepin and 25th Street has been owned by Kristin Traynor since 2009. “It’s a neighborhood party store and balloon decorating business,” Traynor said. They will sell a single balloon, a balloon bouquet, or create custom designs for events large and small.
With the COVID lockdown in 2020, business actually increased. “I went back to doing deliveries only. I was overwhelmed with business,” Traynor said. “Grandmas were sending balloons to their grandkids. Kids couldn’t have birthday parties, so the parents would have us put up balloon arches in the front yards.”
“But the civil unrest was a whole other story,” Traynor said. “We boarded up that weekend. It was Edina High School’s graduation and I had to cancel 34 parties. The gas station across the street was set on fire and I was not going to bring my employees into the neighborhood to work. It cost me 10 or 15 thousand dollars.”
“We stayed boarded up for a couple of weeks,” she continued, “but opened as soon as things calmed down. People would want to come in, but they were afraid of coming into Uptown.”
Now, Traynor says, things are getting back to normal. But she has a new worry – a city plan to reduce parking spaces to make room for public transit and bike lanes. She talked with her city council member but said, “all I got was blank stares and shrugs. We have a lot of customers coming in from the suburbs. Where are they going to park when they come here? If they do decide to go through with eliminating parking spaces, sadly, we’ll have to relocate.”