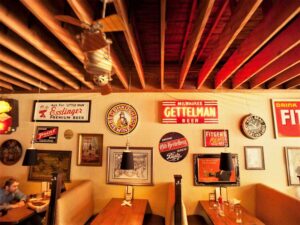 I made a quick visit to the south Minneapolis end of Chicago Avenue just as we were emerging from a long and, for me, very isolating winter. I had let my car battery die, and had sort of lost the will to drive, which meant I was not motivated to “sort it.” So I didn’t go anywhere at all from the second week of January to when my friend J, with her hybrid car and an underground parking spot, came back from Mexico in late March.
I went with J to Pumphouse Creamery just to see if they were still open, if they had totally stopped using delivery services (for now, they have) and if they still had that delicious lemon-infused olive oil ice cream I’d been dreaming about all through the snow and the cold and the omicron wave. They do still have it, and just as I was straightening up, clutching my pint and about to pull my head out of the freezer display, my eye caught the words “Brother Justus Single Malt Whiskey” printed on one of the cartons.
“Wow!” I said. “You have this in an ice cream? I’ve been looking for this for months.” Backstory – I am a big fan of single malt whisky (or whiskey, depending on whether it’s from Scotland or somewhere else). And I’m a big fan of craft distilleries and of local small businesses. And I am a big fan of unions. Brother Justus happens to be a tiny, local craft distillery, with a union, specializing in single malt whiskey. Very few liquor stores carry it, mainly because with only 10 employees and all the supply chain problems at the moment, they don’t produce enough for many stores to carry. But you can totally get it in an artisanal local ice cream that also is very niche and small-batch. And since one of my favorite accompaniments to booze is ice cream, I was delighted by this turn of events. I bought a pint of each.
Other food delights abound in the area. If you stretch it as far south as the 50s, there is Heather’s, and also an excellent grocery, Kowalski’s. I have sung their praises before. Another seasonal food source about halfway between is the Nokomis Farmers Market. Sadly, this one market, of the three operated by food nonprofit Neighborhood Roots, will be on hiatus for the entire 2022 season. The Kingfield Market on Nicollet Avenue South and the Linden Hills Market on Chowen Avenue South will be open as before. See the website at neighborhoodroots.org for exact days and hours.
Several old favorites in the food and drink arena are still going strong at the Chicago and 48th Street hub. These include Bagu Sushi and Thai, which is only open for dinner, Turtle Bread right on the corner for lunch and baked goods, and Sovereign Grounds Coffee Shop diagonally across the street for coffee and other drinks, snacks and Middle Eastern treats. For locally brewed ales and delicious pub food, the Town Hall Tap is a fun, easygoing place. And check out Town Hall’s latest addition, The Sidecar, a craft cocktail lounge in the adjoining space (formerly Adrian’s Tavern). The Sidecar opened last fall, and now with summer approaching, their much anticipated 50-seat alley patio will be an ideal spot to enjoy the warmer weather. 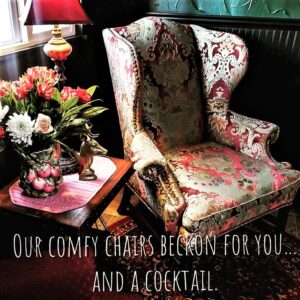 That brings us right next door to another new place! I can’t say much about them yet, but I am going to be visiting in mid-April to celebrate the 60th birthday of a friend. In the space occupied by Pepito’s for many years, and most recently by a Minneapolis outpost of a popular St. Paul burrito restaurant, we now have a supper club. No air quotes, no irony, pretty much the real deal, apart from not being in Wisconsin. The Creekside Supper Club has attracted positive attention from many Twin Cities restaurant reviewers since its opening, so now The Dish will have a crack at it. Watch for our May edition for that.
The one place in this area that The Dish has reviewed is also going strong as far as I can tell – Herbie Butcher’s Fried Chicken, an all-plant-based, take-out-only fried chicken bucket spot on 48th Street just a few steps west of Chicago. This is a venture going into its second year from the twosome who founded and run The Herbivorous Butcher vegan deli in Northeast, hence the unusual name. Although their product doesn’t taste exactly as I remember Colonel Sanders’ did (it’s been about 40 years), it will hit all the sweet spots of bucket fried chicken without the omnivore’s dilemma.
Besides spots for eating and drinking, this area has two wonderful pet services – Bubbly Paws, where you can wash and groom your own pet or have it done, and the Minnehaha Animal Hospital. There is also a dog-friendly, locally-owned liquor store, Ken and Norm’s, which I have not visited since before the pandemic. They have delivery service through Drizly. And there’s a great gift shop we covered last year, 14 Hill – it’s still there, too. As their website says, they sell “a hodgepodge of cool sh*t,” including unique cards and gifts for all occasions, fun stuff for kids and babies, jewelry, socks, scarves, candles, bath and body products – the list goes on. Check them out in person or follow them on social media to see their latest offerings.
This business node abounds with beauty, health and wellness businesses. On the east side of Chicago is Rue 48 Salon and Spa Sweet, and around the corner on 48th Street, east of Chicago, is an old Southside cottage converted to a wellness center with various practitioners. A little farther south on Chicago is the Southside Barber Lounge. For traditional medical care, there is a HealthPartners Urgent Care Clinic near 47th and Chicago. 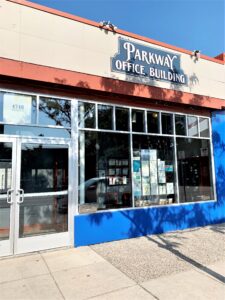 The Parkway Office Building, a good place to find a massage therapist or get a pedicure

Another such resource is the Parkway Office Building, which houses a financial service and a few other non-health-related businesses, and a large variety of small clinics, massage therapists, mental health counselors, chiropractors, acupuncturists, facial spas (estheticians) and a nail salon. These are all by appointment only, but check the lobby directory or, if looking online, search by the street address 4748 Chicago Ave., Minneapolis.
The big comeback change for Chicago and 48th is the return of fantastic music, film and other entertainment events at the Parkway Theater. Their COVID policy is the same as many other venues: (1) show a vaccine card or a certified test result within three days; (2) masks are required at all times for the audience. Some of the events listed below (for your convenience, as it’s not a complete list) have lower prices for advance tickets. We have not listed sold-out events (as of press time). They are “all ages” shows unless otherwise specified. Contact the theater for times, ticket prices, all the stuff we left out, and any additional information. 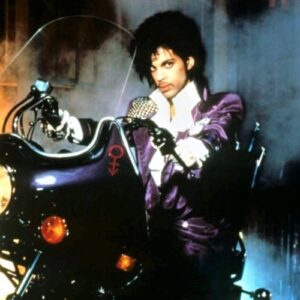 See ‘Purple Rain’ in 35mm at the Parkway 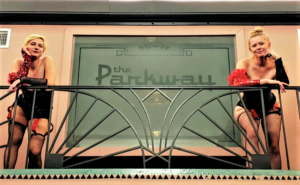 Parkway cosplaying ushers for the midnight showing of ‘Rocky Horror’

• 6th Annual Bow Wow Film Festival (short films for the love of dog – matinee) Sunday, May 22 (also available for limited streaming at home, single or family).
• Where the Beat Goes On – CD release of a 1979 CD by Fingerprints, followed by a screening of “Jay’s Longhorn” (documentary film, 2019) Saturday, June 4, sponsored by The Current. Advance ticket includes complimentary CD. To learn more about the 1970s Minneapolis band Fingerprints, Twin Tone Records and Jay’s Longhorn, see the article at tinyurl.com/veepfwhf.

Another thing that hits the continuing success of our local small businesses, besides pandemics, gentrification and displacement,
crime and the weather, is major road construction. If you’re a fan or user 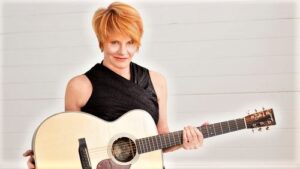 Shawn Colvin, coming to the Parkway for her 32nd Anniversary Steady On Tour

of public transit, you may already know that much of Chicago Avenue, including the part that goes through the Chicago – 48th intersection, will be served by a new bus rapid transit route called the D Line. This line will connect Brooklyn Center to the south suburbs, including the Mall of America, and gains speed over normal bus routes due to limited stops, a very direct route, and faster boarding, with riders pre-paying in a manner similar to light rail. The D Line necessitates the need to construct more platform-style stations along the route, and this will be combined with other safety and accessibility improvements.
The D Line will have new stations at 42nd, 46th, 48th, 52nd, 56th and 60th Streets. Construction around 48th and Chicago will mean closing the intersection for up to a month. The work begins on Chicago Avenue in 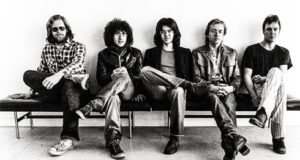 April, but the exact dates it will begin at each stop are not known yet. Please remember to support your local businesses while construction is ongoing. They will all be accessible in some way from nearby parking or bus stops.