Understanding the strategic and political importance of Mariupol 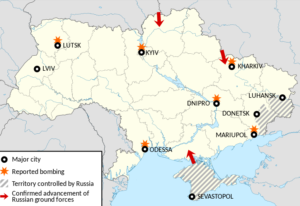 Mariupol was a thriving northern port on the Black Sea. Actually, the Ukrainians call that part of the Black Sea the Azov Sea because it’s almost closed off from the rest of the Black Sea by a peninsula reaching out from the Russian side trying to reach a peninsula reaching out from the Ukrainian side just a little southwest of Mariupol.
The Russians need to go through Mariupol if they want to connect Crimea by land with the rest of Russia. They claim they are de-Nazifying Ukraine. That claim rings false. No one believes the heroic resistance of the Ukrainians could be the work of Nazis. “Nazis? Led by a Jewish president? Impossible!”
The resistance in Mariupol is being led by the local unit of the Ukraine National Guard. They call themselves the Azov Brigade. They have been fighting Russians around Mariupol since 2014 when Putin took over Crimea.
They were founded and led by Andriy Biletsky, who is also a leader of the far right, ultra-nationalist, neo-Nazi Social-National Assembly. The SNA maintains close contacts with far right neo-Nazis in Germany, and the name Social-National was deliberately meant to echo the National Socialist (Nazi) party of Adolph Hitler. Their flag is a superimposition of the capital letter I imposed on the capital letter N—supposedly representing Independent Nation, but if tilted 90 degrees it is a clear allusion to a swastika, a rather obvious inside joke. Some Ukrainians believe the conflict is racial. They believe in discredited social constructs like Aryan and Slavic, and they believe it is their sacred responsibility to settle the “Wild, Wild East” and create Lebensraum for the white race by pushing back the Mongol horde that had become Russia.
The Maidan Revolution was probably begun by Biletsky’s right-wing groups. They staged a torchlight parade in 2013 opposing the Russian president and Russian influence in Ukraine. In 2014 they were attacking and burning the opposition party’s headquarters. They killed an innocent bystander. They were probably responsible for tearing down the statue of Lenin in a square in Kyiv and replacing it with a golden toilet—symbolizing the corruption of the government.
The left joined the movement. Tents were set up in a 24/7 occupation of Maidan Square. The movement for reform finally ousted President Yanukovych, and he fled to Russia. And then, Putin took over Crimea, and then, Zelensky was overwhelmingly elected president, and then, since no one had seriously objected to his takeover of Crimea, Putin decided to send in tanks and infantry to support the Russian-Ukrainians being indiscriminately killed by the Azov Brigade in the Donetsk and Luhansk regions. But, of course, nothing can justify the murder of more than 1800 civilians by the Russian invasion.
The divisions in Ukraine are for the Ukrainians to work out.
The first casualty of war is truth, but we all need to look closely at how we got here, so we don’t ever have to come here again.