Lyndale Open Streets is set for a summer celebration 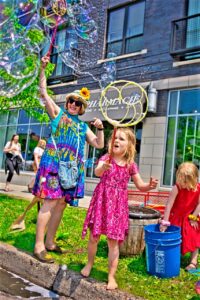 Open Streets, now a Minneapolis yearly summer tradition, started as part of a movement to put people before cars on city streets around the world. “We do this to invite folks to play, walk, bike and roll, experience the streets in a different way, imagining cities designed for people and not cars. People look forward to this every year. And it really highlights the vibrancy of the communities in Minneapolis,” said organizer Ember Rasmussen.
Last year, COVID caused the event to be moved to October, but this year it’s back as a summer event, on Sunday, June 5, the beginning of summer weather. From 11 a.m. until 4:30 p.m., Lyndale Avenue will be closed to motor vehicle traffic between 22nd and 42nd Streets.
The Lyndale Avenue Open Streets is the oldest of the Minneapolis Open Streets events, first held in 2011. “It’s vibrant,” Rasmussen said. “There is so much for people to experience. People can stop and visit with artists and local entrepreneurs. They can stop for food or a beer.”
“It’s a people experience. You see families. People come with their kids and dogs. There are people playing hopscotch in the middle of Lyndale. There’s an impromptu dance party. You can even participate in a fitness class. There is something for everyone.
“But the thing folks love the most is getting to be out with their neighbors in beautiful Minneapolis weather. Everybody who experiences it loves this.”
Music is an important part of the event. Bands and musicians play all day, with everything from the American Dream Band playing dreamy rock ‘n’ roll from the 60s and 70s, the Cavern Lads playing Beatles covers, and musicians playing jazz, folk and more. Local DJ Ju!ce is there for an impromptu dance party. A walk (or skate or roll or bike) down the 20 blocks of Open Streets also offers opportunities to try classic American foods as well as foreign foods for more adventurous eaters. 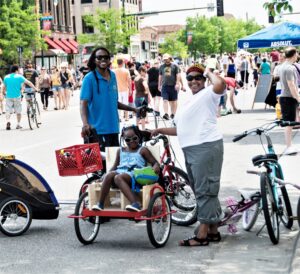 Lago Tacos is a regular attendee at Lyndale Open Streets. Their sit-down restaurant at 2901 Lyndale is now open but at Open Streets, this restaurant that caters to Mexican street food fans will be serving street tacos and elote (Mexican-style grilled corn on the cob) cooked on a grill outside their front door. Last year, when the event was moved to October, crowds were smaller, said general manager Steve Nicholas, so this year they expect even more customers to stop by the booth to make up for lost time.
“It’s been a while since we had a legit Open Streets,” said Nicholas. “It was canceled in 2020 because of the pandemic. In 2021, it was held in October and the turnout wasn’t anywhere near what it was when it’s in June. When it’s in June, people are looking for something to do outdoors, and the street looks like the State Fair. Everyone wants to be here.”

A regular at Lyndale Open Streets since its beginning, this year the music shop will offer everyone a chance to try out unusual instruments and ask questions about classes and music teachers. “But the main thing we do is to provide music entertainment at the store,” said Carrie Bell, the director of music education.
Headlining at 3400 Lyndale are the Melismatics, a pop-rock group featuring Mark Wade on bass and Ryan Smith on guitar. Both are teachers at Twin Town.
Other featured bands include the Angry Baker Brass Band, whose members are students at Washburn High School, and a girl-powered rock group made up of middle and high school musicians. Also performing will be Loki’s Folly, a great punk rock band, said Bell – two sisters and their brother – who have played at First Avenue.
The store has 15 rehearsal studios and 28 music teachers, and this year, a lot of their students will be working to build back their programs and their skills. Open Streets will offer a chance for aspiring and accomplished musicians to learn more about the opportunities offered by Twin Town Guitars. 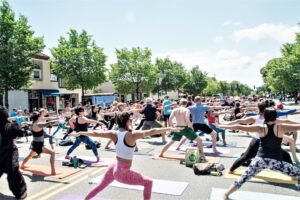 Salon Blonde’s owner, Mandy Simmons, is opening up her new salon a few blocks from Lyndale Avenue, so she’ll be setting up a salon chair outside of Twin Town Guitars, her sister’s store. There, she’ll offer what she says will be unique hair experiences for those who stop by. “Just some fun up-dos and clip extensions,” she said. “Up-dos can incorporate braids and can be romantic and soft or can be an everyday look. And you don’t need really long hair.”
Simmons spent 17 years doing bridal hair and six years ago was in Uptown doing color demonstrations. “A lot of people stopped by,” she said. “It’s going to be a lot of fun. And I will get to know the neighborhood and the neighborhood can get to know me.”

When not at Open Streets, Snapology offers educational classes, camps and even birthday party events, with fun activities that help teach STEM (science, technology, engineering and mathematics) to kids from age 4 to middle school students. At their booth at 2649 Lyndale, they’ll offer games including a spin art project with markers instead of paint, which owner Aaron Hagebak says will be “less messy.” There will also be a coding project using a small robot that reacts to sounds, and a lighthouse that kids can make brighter or move faster. There will even be Lego projects.
Past years had parents as well as their kids lining up to try out the games. This will be Snapology’s third year at Lyndale Open Streets. “It’s a great event and we’re excited to be back again,” Hagebak said. 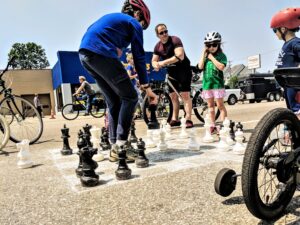 This pet supply store carries high quality specialty food for dogs, cats and other pets, and at this year’s Open Streets, they will be out in the street with an assortment of goodies for people’s furry four-footed friends.
The shop crew didn’t make a final decision to attend until the end of April, but they are hoping that this year will be as successful as previous outings at Lyndale Open Streets.
“We’ll have an assortment of treats for dogs and for cats, including doggie ice cream,” said Eva Mitchell, the store’s lead sales associate. “We go to Open Streets because we love connecting with our community. People move in and out of this neighborhood and this is a chance to let new people know what we carry for pets.”
The store has had its booth on the street in front of Urban Pet Supply at 2106 Lyndale for three years, and last year, Mitchell said, it was a beautiful October day. “The staff met some fun and cute dogs. Even some cats made it to Open Streets. We’re looking forward to doing the same this year.”