“This time it needs to be different.” 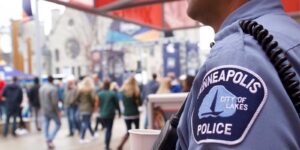 • MPD maintains a culture where MPD officers consistently use racist, misogynistic, and disrespectful language and are rarely held accountable.
• MPD provides deficient training and guidance for its officers, which exacerbates a pattern of discriminatory, race-based policing.
• MPD officers use higher rates of more severe force against Black individuals than white individuals in similar circumstances.
• MPD officers inappropriately use neck restraints and chemical irritants.
• MPD officers are more likely to search Black individuals and/or their vehicles during a traffic stop than white individuals in similar circumstances.
• MPD uses covert social media to target Black leaders, Black organizations, and elected officials without a public safety objective.
• MPD’s covert social media accounts were used to conduct surveillance, unrelated to criminal activity, and to falsely engage with Black individuals, Black leaders, and Black organizations.
• MPD does not have proper oversight and accountability mechanisms for officers’ covert social media use.”

Mayor Frey held a news conference at which he said, “This time it needs to be different.”
Chuck Turchick was not impressed. He wrote on the Minneapolis Issues Forum:
“Mayor Frey’s press conference was a master class in responsibility deflection 101. He had about ten City employees standing behind him, saying it was a collective effort we needed. He suggested that probably every mayor in the country faces similar problems and feels they should have acted with more urgency. He said that the Black leaders he met with pointed out to him that these problems have existed for far longer than the ten years the MDHR investigated. He said that ‘each and every person has a role to play.’ He talked about the policy changes he already has made, but said they have to be implemented too – as if that wasn’t his responsibility.
“What he didn’t say was that the City Charter reads as follows:
‘The Mayor has complete power over the establishment, maintenance, and command of the police department. The Mayor may make all rules and regulations and may promulgate and enforce general and special orders necessary to operating the police department. Except where the law vests an appointment in the department itself, the Mayor appoints and may discipline or discharge any employee in the department (subject to the Civil Service Commission’s rules, in the case of an employee in the classified service).’
“I do so wish we had a mayor who took responsibility without all of the qualifying language.”
Will this time be different, Mr. Mayor?
Will you tell us what happened in that basement in South Minneapolis where the MPD Tactical Squad killed Terrance Franklin?
Will you tell us whether the officers who apprehended and killed Jamar Clark observed proper protocol?
Has your office reviewed the tapes of the killing of Thurman Blevins? Did the officers who pursued and killed him operate with proper regard for public safety?
What changes in confronting depressed and suicidal neighbors has the MPD instituted since the killing of Travis Jordan?
Are we going to finally get some answers to these questions?
We’ve asked them before.
Will this time be different?