Confrontation at the convention 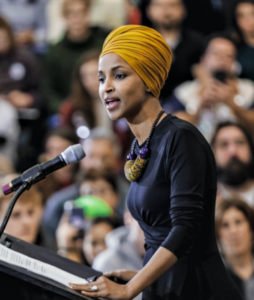 “Well,” I tweeted, “now I can cross ‘being manhandled at a DFL convention’ off my bucket list.” I didn’t mean to be vague tweeting, but I was still trying to sort out exactly what had gone down and how I felt about it.
It all began at the second of two Senate District 63 (SD63) conventions, which, while mostly very unpleasant to experience, were at least on Zoom, where no one can actually assault you (or give you COVID). You may have heard about the crazy double Zoom convention in SD63. The first one adjourned after a long, long day of bitter struggle, with House District 63A locked in an endorsement battle at the fourth ballot with Samantha Sencer-Mura just three percentage points short of endorsement. Her opponent was Yusra Arab, a previous year candidate for Minneapolis Ward 2 City Council. We had not yet chosen delegates to the Congressional District (CD5) and state conventions, plus a lot of other business, some less critical.
The second convention was planned with many tweaks in hopes of avoiding the problems of the first, and for the most part these did work. Two more ballots were held on the endorsement question. Between the fifth and sixth ballots (this will be meaningful to those who know the arcana of DFL proceedings, and those who don’t know will probably prefer to remain blissfully unaware) a motion for “no endorsement” failed, which is hardly surprising as Sencer-Mura was now just two points shy of a win. Nevertheless, lacking basic mathematical literacy, the Yusra Arab group followed the time-honored DFL sore-loser strategy of walking out (logging out), but they didn’t even have the numbers to break the quorum! On the sixth ballot, Sencer-Mura got over 80%.
But the truly fun part of the SD63 convention was our successful attempt at doing a walking subcaucus using Zoom’s breakout rooms. There were about a dozen of us delegates and upgraded alternates there who were either in the Democratic Socialist Caucus (which works solely within the DFL) or the Twin Cities DSA (which is non-partisan) or both. Suspecting we had fellow travelers among the rest of the delegates, I nominated a subcaucus called Democratic Socialism. This ended up being the second largest subcaucus and choosing seven delegates and seven alternates by acclamation. (I chose to be an alternate.)
My Southside Pride colleague, comrade in TCDSA, and good friend Dave T., who happens to be the DFL chair of SD62, was also an alternate to the CD5 convention, which was Saturday, May 7, and would consider the endorsement of Ilhan Omar, incumbent (and world-famous) congresswoman. Dave and I decided to go to the convention together. Omar was being challenged by Republican-financed “we’re all DFLers here” perennial candidate Don Samuels. The stage for shenanigans was set.
Dave got upgraded before balloting began. Somewhere between the first and second ballot, the credentials chair told me I probably wouldn’t be upgraded, because the Democratic Socialist subcaucus from SD63 was fully present and my overall alternate rank was 16. So I was just wandering around, hanging out with Dave. They were about to have the second vote and I was making my way to the alternate seats when suddenly one of Ilhan Omar’s floor captains grabbed me, saying, “Are you Deb Ramage?” and took me out to the credentials table. They said one DS subcaucus female delegate, Luna, had left after the first ballot, assuming it would be a win. She did not turn in her badge, so the credentials chair was being pissy about it. The Omar floor captain had a text from Luna on her phone, but that wasn’t enough.
Meanwhile, back in the hall a one-minute warning sounded about the “floor freeze.” (More arcane DFL stuff.) Omar’s floor captain told me to run to the delegate area. About then, a small mob of people (all from Don Samuels‘ campaign, most of them wearing the t-shirt) formed in the doorway and one of them was closing the doors – prematurely, as it turned out.
People in the lobby rushed the doors, and a scrum developed. Some of our people got up and joined the scrum from the inside of the hall. Being sensibly risk averse, I was not part of it. Instead, I shouted at the mob, saying, “Stop this, shame on you, stop it, someone’s going to get hurt.” One of our DS subcaucus delegates, Raphael, who was on the inside, reached out his hand to me through the roiling ruck and said to grab it. Without thinking, I did, and he pulled me through the tight crowd of pushing, shoving, angry strangers. I emerged on the other side. I think they closed the doors behind me. Everything after that is a bit of a blur.
For about 15 minutes I was standing by the mic with Amy L., the chair of SD63, while all the officials huddled about what to do. (Somehow I ended up being a Schrodinger’s alternate, both entitled and not entitled to an upgrade.) Amy left me standing there and went to join the huddle. Ilhan Omar came up to me and asked if I was OK, and I said, “No, I’m not, I’m still shaking.” And she said, “Was that you who pushed through the mob at the doors?” and I said, “I never pushed, I was pulled through!” So Ilhan gave me a hug and said she was sorry. Mercifully, after a few more minutes I was seated with the delegates but told I couldn’t vote. In the end none of that mattered as Ilhan Omar was endorsed on the second vote.