I met Marquise Bowie at George Floyd Square in February of 2021 on a day commemorating the assassination of Malcolm X.
I introduced myself because he was wearing an Agape hoodie, which identified him as belonging to the group I had wanted to write about for a while already. 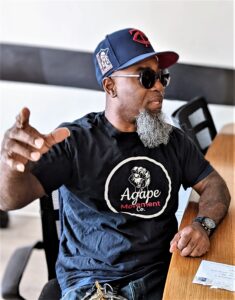 Marquise in conversation. Continuing dialogue as a peacemaking tool is one of Agape’s basic beliefs.

I ended up writing about Agape various times and got to know Bowie in the process.
The most dramatic part of his story is that he was imprisoned for 11 years and nine months, from 2007 to 2019, mostly in a federal prison camp in South Dakota, for “conspiracy to sell drugs,” a non-specific charge including everything he and his friends had been doing for the past 17 years. He and 11 friends were charged and offered plea deals, which all but one of the 12 accepted. Marquise, and everybody else I’ve talked to about this case, always remind me that you do way more time for a small amount of crack than for a large amount of cocaine—and that crack cocaine is just cocaine with baking soda in it.
Per the plea deal, Marquise was sentenced to 14 and a half years, but earned some time off for good behavior. Just recently he was released from his last two years of parole.
Bowie was getting his life together, had a job and was in treatment for alcohol issues when he was incarcerated. The only drugs he ever did were alcohol a lot, weed a little, and mushrooms twice. His love for sports kept him away from the hard stuff. But he did peddle here and there. When he was 12, his mother got into a relationship with a drug dealer, so after that he lived in a drug house where selling was pretty normal.
Like most people in this culture, Marquise loved money, and he said the money was nice, and made it possible to take care of some of his cousins. Now he makes just enough to take care of himself only, but he says he prefers a low income to the quick money that leads you to prison where you can only earn $50 a month.
From everything I know about him, if ever there was a person who has made lemonade from lemons, Marquise is that guy.
He likes to look at his inordinately long sentence as a lifesaver. He was drinking, his crowd was trigger-happy, and he had seen too many friends in caskets. He might have been killed; he might have killed someone. Maybe being in prison was a safer place for him to be, to protect him from himself, from the streets, from law enforcement. 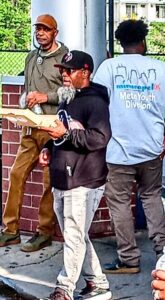 Marquise with Steve and a Somali group

Two members of the Rolling Thirties Bloods involved in the same case lied about Marquise’s role, assuring themselves shorter sentences and a longer sentence for Marquise, but Bowie doesn’t have hard feelings and understands why they did it. “Indirectly, they helped me become a better man,” he says.
The best thing about prison for him was the opportunity for education. During Marquise’s formal education in public school, he had been a good student, often in advanced classes, but he didn’t graduate. Already inside the criminal justice system in high school, he got his GED at the Hennepin County workhouse.
Throughout his long period of imprisonment, he took every available class he could fit into his schedule, the only limitation being the classes where the books were too expensive. He took the writing class conducted by Jay Reese year after year. Examples of his writing were selected every year for the books printed from those classes, “4 P.M. Count.” His writing is extremely good— creative, direct and clear. One essay is a psychological analysis of the twin personalities—Mad-dog and Marquise—that lived within him.
While in Yankton, and continuing now, Marquise is an inveterate, thoughtful learner—between extensive serious reading and online classes.
Bowie is also open to many different types of people. He doesn’t pre-judge and is willing to learn. His informal prison education included meeting people he wouldn’t have connected with elsewhere. In particular, he developed an unexpected friendship with a former Detroit police officer, also incarcerated, who was in his Bible study group, in his writing classes and in other groups. Marquise knew he had been there 15 years, but he didn’t know what for. “At the end of the day,” Marquise said, “[the man] was ‘a prisoner.’” 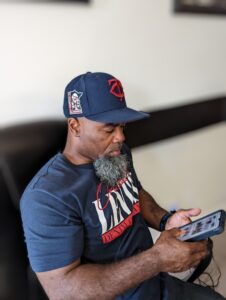 Luckily, Marquise’s entire prison experience was in low security. The prison camp building in Yankton, which has no fences, is in a residential neighborhood across from a high school—they could watch football games through the window.
It wasn’t all good, though. The facility was built to house 300 people and there were 900 living there. But Marquise makes that into a positive as well: “I learned a lot of patience, waiting in line,” he says, “and tolerating close proximity.”
The worst thing about being incarcerated was that, as happens to many incarcerated people, he was not allowed to attend his mother’s funeral. Marquise’s mother, his “greatest supporter” as he has said many times, the person who struggled with her own life yet gave him everything she could, died while he was in Yankton, and he couldn’t be at her grave. I was sure there would be no positive way to look at that. But Bowie said it’s good he didn’t go. Mostly, he couldn’t have handled it, he said. “I can barely handle it now, three years later.” He hangs onto his memories. His mother was the one who brought his little daughters to see him when he was in Yankton. One of his writings is about his grief at being convicted immediately after his second daughter was born and his reunion with her at age 4 when she didn’t know him. All through his incarceration and especially now, he is committed to being a father even though his own father never stepped up and wasn’t there.
When George Floyd was murdered, Bowie was living close to 38th and Chicago. He and several trusted friends built barricades to protect the area that had just been so drastically and cruelly assaulted. They distributed food and clothing to whoever needed it. They sought out Steve Floyd (no relation to George), one of the co-founders of the Agape Movement, to form a version of Agape at 38th and Chicago, to help young Black men deal with mental health issues, to find employment, to get support.
At present, Bowie is a solid, focused Agape member. He has his own side organization, as do many Agape members, called BAM—Becoming A Man—through which he gives hours and hours of his time to young people. 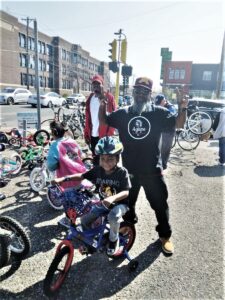 Agape’s main job as a group is to patrol the streets at night and maintain a presence in schools in order to provide security. They are not armed and use communication and creativity to keep a lid on violence.
Bowie says, “I don’t believe in violence of any kind. Having a gun doesn’t help. It’s very risky. We have a relationship with people in the street. They might listen to us.”
Every night after their patrols Bowie takes notes on the debriefing session which he then types up the next morning. He’s the scribe.
It seems like he’s pretty much doing Agape work around the clock. Whatever the situation, he’s on it. He answers his phone and talks to whoever needs encouragement. He answers texts right away to stay in touch with his network.
With his talent for friendly conversation, he goes out into George Floyd Square during the day to welcome tourists and engage them in conversation. This dispels any notion people might have about GFS being a scary place.
One morning when I went to meet Marquise I found him in front of the ForReal coffeehouse talking to some friends about religion. He’s a natural preacher. “You don’t have to look for God. God is not lost. God is always looking for you and will find you,” implying that God will then love and care for you in your darkest hour.
Agape is a Greek word which means unconditional love. Marquise practices this kind of disinterested care for others, both through Agape the organization and through his personal Christian faith and association with Macedonia Baptist Church. For example, the weekend of May 14, Agape organized a Circle of Love luncheon to embrace those parents who have lost children to gun violence. In high school Bowie himself lost his best friend in a fatal shooting at a party.
Bowie has dealt with many harsh realities as have the other Agape members. A common commitment among them is trying to provide the care and attention to young people they themselves didn’t get while growing up.
It seems Bowie sets himself Herculean challenges. He moves forward, though, confident in support from Agape and from his church. Besides that, he grounds himself in daily prayer, meditation, Bible and devotional reading. “It’s my spiritual oxygen,” he says.