Open Streets Franklin Avenue is back and better than ever 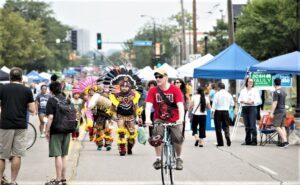 This year, the Minneapolis celebration called Open Streets is back after COVID shut down events around the city. But on Sunday, July 10, from 11 a.m. until 4:30 p.m., East Franklin Avenue from Portland to 26th Avenue will again be closed to motor vehicle traffic and open to bike riders, skaters, skateboarders and pedestrians.
There will be lots to do, hear, see and even eat. And the event is free. A number of local groups and organizations will be there to inform and entertain, featuring the best of the Phillips neighborhood.
“Open Streets Franklin stretches through a culturally rich corridor in the heart of Minneapolis,” said Ember Rasmussen, who organizes Open Streets events. “Notably, Franklin is home to many urban American Indian community hubs, art galleries and restaurants, as well as Norway House, a Norwegian cultural center.” Those, and many more groups, will be part of the reborn 2022 Open Streets celebration. 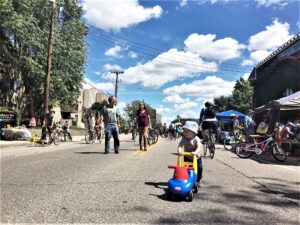 “We have been attending Open Streets for several years but not since COVID, so we’re super excited,” said librarian Kimberly Trinh-Sy. “This year is special, not just because we’re back, but because our library was renovated in 2019. We were closed to the public and reopened in March 2020, but we’re using Franklin Open Streets as our official belated reopening celebration.”
The library will invite people to see the new and renovated space, but there will be more than just a library tour.
“We’ll have entertainment,” Trinh-Sy said. “The Indigenous Peoples Task Force’s Ikidowin Youth Theater Ensemble will be doing three 15-minute stage performances.”
The library will also have children’s activities including a children’s book giveaway. “The kids will fill out a form and then can choose a book to take home with them,” Trinh-Sy said. Members of the Law Library will also be there, not giving legal advice, she said, but connecting people with legal services if they need them. Visitors can also view a special collection of historical photographs.
The library is also collaborating with artist and creative healer, Ellen Sweetman, who has worked with them at previous Open Streets. Sweetman will invite and guide people to create community art. “I work with creativity, discovering new ways to make art,” Sweetman said. “This is perfect for those whose narrative has been, ‘I can’t draw or paint’ or ‘I am not an artist.’”
“There will be a lot of different fun activities for people of all ages,” Trinh-Sy said. “Franklin Avenue library branch is a small branch, but we’re hoping for a big crowd. It’s going to be a busy day. We want people to know we are open and to get connected to our library once again.” 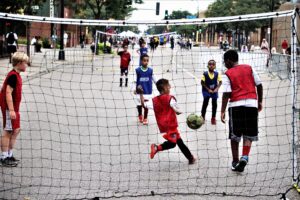 “We are Norway House. Our mission is to connect the USA with contemporary Norway through business and culture,” said Joseph Grødahl, Norway House’s director. Norway House shares the block with the Norwegian Lutheran Memorial Church, both part of the block’s 100-year-plus Norwegian presence. Norway House has attended Open Streets each year since 2014, according to Grødahl. Then came the shutdown during COVID. They’re back again, but this time with a difference.
This year, for the first time, Norway House is collaborating with the American Iraqi Reconsolidation Project, a group of Iraqi refugees and immigrants to the United States. “The group’s mission is to build friendships with Americans, to bring about healing after the wars in Iraq,” Grødahl said. “Norway has a presence on the world stage as a peacemaker. We’ve been working with Iraqis just for this event.”
“At Open Streets, we’ll have Iraqi dancers and music, and our café will serve Iraqi and Norwegian desserts such as baklava and Norwegian pepper cookies,” he said.
Artists and craft sellers will give demonstrations of Arabic calligraphy and Sumerian cuneiform, writing kids’ names in these languages. And, of course, there will be demonstrations of Viking runes. 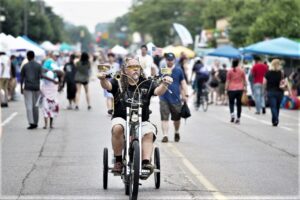 Seward Co-op is using Franklin Open Streets to throw a block party celebrating their 50th anniversary with a number of events, including a community meal. For only $5, choose meat or vegetarian options and browse the block. Local producers will be there, offering samples of their sustainably produced foods at the community foods fair.
“For kids, there will be a bounce house,” said Natalia Mendez. “And we’ll have family-friendly activities with some of our community partners.” Music will be provided by Phillips-based radio station KRSM and local DJs. And visitors can bring their own tote bag to be screen-printed. Or, if you are one of the first 75 people to request a tote, Seward will provide one for you. 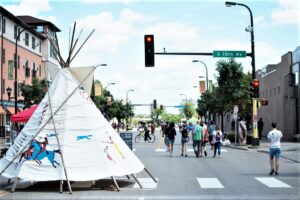 Britt Howell is a health and wellness educator who will be bringing her knowledge to Open Streets again this year. Her group, BF50 Indigenous Health, organizes health and culture events for Black and Indigenous communities in Minnesota. At Open Streets, she will be partnering with other groups to offer even more services.
“We will have resources to assist low income and underserved people, with blood pressure and blood sugar tests. Licensed social workers will be there to answer people’s questions,” Howell said.
Howell will also be partnering with Nice Ride Minnesota, a bike sharing program concentrating on sustainable food and transportation. “Nice Ride for All memberships usually cost $109 a year,” she said. “Here at Open Streets, it will cost only $5 for the entire year. We will also be signing people up for a food education program and classes about plant-based foods, given through Minneapolis Park and Recreation, all summer.”
Palabristas, a Minnesota-based collective of poets, spoken word artists, and writers of ChicanX/LatinX heritage, will be there to show how to get the most out of spoken word performances. And members of the Lower Sioux Indian Community and other organizations will be part of the outreach effort. 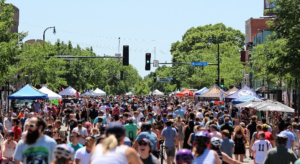 Solar cookers may be the next big thing, says Luther Krueger, who will be at Open Streets demonstrating how various sun-powered cookers can not only make cooking easier but can help save the world.
Krueger hopes that people seeing his demonstrations will become motivated to get their own solar cookers. He promoted solar cooking at Broadway Open Streets last year. “A lot of people came up and wanted to invest,” he said, “but I am not selling these cookers.”
“This will be a cooking demo,” Krueger continued. “Mainly, I promote them for environmental concerns. There are whole areas of the world where people don’t have electricity and they are deforesting where they live to get cooking fuel. They are getting respiratory illnesses from the smoke. In many of these places where this is happening, they are sun-rich. They are not using the energy that they have in abundance.”
Krueger said he started collecting solar cookers about 16 years ago and now has more than 80 of them. “I started to make some and buy them. I will have a parabolic cooker to fry or bake and a vacuum tube cooker that works like a microwave and some that work like a slow cooker. With solar, there are no pollutants.”
“We live in what I call the ‘variety weather belt,’ but even here you can cook any time of year,” Krueger said. “When the sun is lower it reduces the power, but it can still work. It just might take a little longer in December than in June. But it’s the greenest thing you can do when you cook food.” Look for his tent and follow the tasty food aromas.

Three organizations based in the Seward neighborhood will be at the east end of Franklin Open Streets. With over 100 years of combined service, Seward Neighborhood Group, Seward Civic & Commerce Association and Redesign work to support and advocate for both the residential and business communities. There will be face painting and mehndi for both kids and adults, as well as free popcorn and cotton candy. You’ll be able to put your name in a raffle to win gift baskets with goodies from local Seward businesses – a good reminder to #ShopSeward. These organizations represent you, so please come out and share your priorities and ideas for the neighborhood!