3-PAC is an inclusive organization whose purpose is to foster communication among residents, businesses and the police, serving the 3rd Precinct with a common goal of community safety. The group meets monthly (usually the second Monday), currently at the Corcoran Park building at 3334 20th Ave. S. from 6:30 to 8 p.m. The group has four officer positions including chair, vice chair, secretary and treasurer. The agenda often includes updates from 3rd Precinct Inspector Jose Gomez, who encourages officers to attend when they can, plus guest speakers and discussion items where attendees are encouraged to share information and address specific topics of interest or concern. Residents and businesses may request to be on the agenda. 3-PAC also holds picnics and fundraisers and is currently developing a Facebook presence.

For five days in May the Minneapolis Police Department (MPD) joined forces with other law enforcement agencies (the Department of Homeland Security, ATF, FBI, DEA, the Minnesota Bureau of Criminal Apprehension, the Minnesota Department of Corrections and the Department of Justice) in an effort to reduce violence by removing guns and drugs from our streets. The operation was able to remove 38 illegal firearms (many automatic), recovered 17 stolen cars and made 97 arrests, with three of those individuals wanted for murder. The focus was on hot spots (high crime areas) such as 17th and Oliver Avenue North and 26th and Bloomington Avenue South. Arrests were made as far away as Bemidji, Minn. Fortunately, the operation rendered no serious use of force or injuries.

Recruiting remains difficult and it’s not just an issue for Minneapolis but a national challenge. Through attrition and continued hiring the numbers remain status quo.
The Minnesota State Patrol is assisting the MPD on Thursday, Friday and Saturday evenings with four officers and two squad cars providing four-hour shifts (from 4 p.m. to midnight) patrolling the Lake Street corridor between Hiawatha and I-35W. They do not respond to 911 calls but will assist officers on request. The Bureau of Criminal Apprehension is also providing 13 investigators to assist with assault and homicide cases.
There has been community input to the acting chief of police regarding the search for a permanent police chief for Minneapolis. The job announcement is now being drafted and announced. It is a challenging national search with 50% of police chiefs leaving their positions across the nation, due to retirement, resignation, etc. 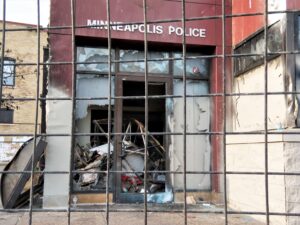 Three sites are being considered for the 3rd Precinct’s new location as input is sought from the community and officers. There are strong feelings regarding resurrecting the former site at Lake and Hiawatha. Some feel there is too much history and trauma attached to the site because of the 2020 riots and prefer a new location.

In the 3rd Precinct, the following crimes are up (compared to the same period in 2021): assault; burglary (breaking and entering); vandalism; larceny/theft; motor vehicle theft; weapon violations; and domestic aggravated assault.
These crimes are down: carjacking; homicide; robbery; sex offenses; property theft; shots fired; and gunshot wounds.
The 3rd Precinct accounts for 32% of both homicide and carjacking crimes in the city of Minneapolis.

The guest speaker for the June 13 meeting was Lt. Steve Herron, Supervisor from the Minneapolis Juvenile Unit. In addition to 18 community members and the guest speaker, four officers and Inspector Gomez attended. The Juvenile Unit is made up of eight investigators and the supervisor. Hot topics for the unit are carjacking and gun violence.
Many carjackings are committed by juveniles, often experienced criminals, teaching and instructing other juveniles. Recidivism is 70% among youth offenders. Two key issues regarding this group are competency and certification (as adults).Juveniles under 16 are rarely if ever certified as adults. But there are some repeat offenders aged 16 and 17 whose crimes are so egregious that efforts are made to certify them as adults which hopefully leads to appropriate arrests and sentencing. The U.S. Attorney for Minnesota is said to be making carjacking a federal offense and is seeking to hold juveniles more accountable.
Competency is also an issue.There can be no trial if a youth is not deemed competent, that is, able to comprehend the charges. This issue can arise as early as during an arrest when Miranda rights are read, and the individual is asked if he or she understands what’s been read. The youth may not understand, or may say they do not.
Another issue is home-monitoring systems used with youth offenders. The technology is less than ideal, and some youth find ways to circumvent the technology.
Meeting attendees also learned that carjacking takes place all hours of the day and night and opportunity is the key to the crime. Opportunity can involve location (no one around, poor lighting), a lone person (more vulnerable), as well as an occupied individual (on the phone, texting, or focused on an activity such as loading or unloading a car). Carjackers often demand the victim’s car key/fob, wallet, phone, etc. The phone is soon discarded but not before there is an attempt to break into a cash application. To avoid victimization, protection of cash apps is critical.
Catalytic converter theft seems to be committed more often by adults than juveniles.This crime requires a skill set, tools and a team, which is often beyond the abilities of youth.
Often cars that have been jacked are abandoned and watched – that is, watched by the perpetrators to see if the car is identified and recovered by police. The vehicle is regarded as hot during this time. If it is not recovered, the perpetrators will often return to the car and use it again. Hence, recovery of stolen vehicles is key to preventing additional crime. New technology allows the MPD to scan license plates along city streets and run checks to identify stolen cars and return them to their rightful owners.

Another issue for the 3rd Precinct is street car racing. A street car racing detail is being established to monitor and curtail street races that take over an intersection and sometimes shoot guns from their cars. There have been two homicides as a result of street car races which have brought as many as 200 to the scene with 10 to 15 drivers. The State Patrol often assists with these crimes via helicopter toward arrests for reckless driving which increases the driver’s auto insurance. Often the cars involved are Mustangs and Camaros.

The August meeting will be on Monday, Aug. 8.