Primary election in August: How to vote

No, we’re not telling you WHO to vote for, this article is literally about HOW to vote.
The primary ballot composition involves a few caveats to ensure you don’t spoil your ballot. No doubt you will get this spiel when you go to the polls, but this is a belt-and-suspenders approach.
The Republican, DFL, and, if relevant, one or both “Weed Party” selections are on the same physical ballot, even though you are only allowed to vote for candidates in a single party for partisan races. Then, to make it even more complex, there are races that are nonpartisan, where the primary election outcome eliminates all but the top two vote-getters. And when it says only vote in one party, that means for the entire partisan part of the ballot. This is simplified by the Secretary of State’s office to: “Don’t cross the line between columns.” 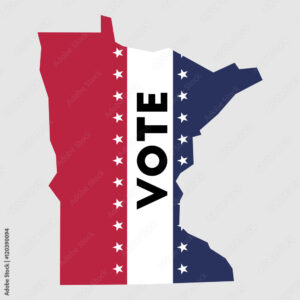 Hopefully, the nonpartisan races won’t be arranged in columns, to make it visibly apparent that all voters can vote for any of them, as per the instructions. At least they’re on the flip side of the ballot, so that helps.
There is such a thing as strategic or cross-over voting, especially in primaries. For example, you may reason that the governor’s primary race is a walk in the park for the DFL incumbent, and you think that if the top contender for the Republican ticket, Scott Jensen, gets the nomination he is not only a possible winner in the general, but he would make a much more dangerous governor for Minnesota. In such a scenario, you might be tempted to vote in the Republican primary in this race for Bob Carney, Jr., even though you plan to vote DFL in the general. But beware! This is only a viable plan if all your other DFL primary races are similarly either “safe” for your preferred candidates or you have no clear preference. Remember, if you vote in the Republican column for any race, you cannot vote in any DFL race on that ballot or it will be rejected.
Now, when to vote? And, if voting early, should you vote in person or by mail? All those options are on the table. In-person and absentee (by mail) voting are open NOW and in-person polling places remain open until 5 p.m. on Monday, Aug. 8. You can also ask for a mail ballot, but then personally deliver it to volunteers outside the in-person polling place assigned to you rather than actually mailing it. If you don’t do any of those, vote in person on Aug. 9. Your polling place may have changed, so look it up online before you go. I have been voting early in person ever since that option was first offered and I love it. Much less stress. Again, if you have any questions or doubts, call the Minnesota Secretary of State’s office at 651-215-1440 or visit sos.state.mn.us.