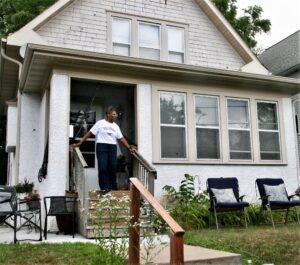 Miss Linda and her home

Linda Taylor, known to her friends and neighbors as Miss Linda, had lived in her rented home for more than 18 years, raising her five kids in the two-bedroom, one-bath home in the Powderhorn Park neighborhood of Minneapolis.
Then, last January, her life was upended. Her landlord informed her that he was selling the property and she would have to leave the place she’s called home for nearly two decades.
“I was paying $1,410 a month rent. My landlord had raised the rent twice in the last two years,” she said. “Living there, I paid more than $200,000 in rent payments.” She’d also paid for upgrades and repairs to the home out of her own pocket.
But now it seemed that at age 70, Miss Linda would have to leave, another story with an unhappy ending. Then her community came together to work for a different outcome.
When the word got out, neighbors started a GoFundMe page and 600 friends of Miss Linda signed a petition, delivered to her landlord, to stop the sale.
Then, members of Longfellow’s Holy Trinity Lutheran Church’s Stepping Out In Faith committee heard about what was happening.
“We found out about Miss Linda’s situation. We had a large sum of money from a sale of property, and we wanted to give to the community on a large scale,” said Pastor Angela Khabeb. “We thought, here’s a place where we could participate as a modern-day miracle. Our church can do things with our money that most other churches don’t do. The whole community came together to help.”
“Miss Linda has been a feature on the block for many years,” said Shari Seifert, the real estate agent with RE/MAX Results who handled the negotiations with the landlord, Greg Berendt.
Seifert worked pro bono and convinced her real estate company to do the same.
The haggling over the details was in progress when Berendt told Seifert that the deal was off. “He decided he wasn’t going to sell. His accountant told him he’d get a tax hit. I talked to him about options to create a path for him to work with us.”
After much back-and-forth negotiation, the landlord had a change of heart. Khabeb and Seifert had convinced him that the sale was not only good business, but it was also good for his legacy. He would sell for cash, giving Taylor and her supporters until the end of June to raise the money. They did, raising $275,000, enough to cover the sale with some left over to go to needed repairs. She closed on the house on May 31, a month before the deadline.
On June 25, the supporters of Miss Linda came together for a celebration, a block party with food, live music and love. Taylor’s daughter came from Chicago to celebrate and to see how important her mother, and her mother’s victory, was to friends, neighbors and supporters.
The story spread, with features appearing in publications across the country, including the Washington Post, the Atlanta Black Star, the Star Tribune and even a publication in Montenegro, as well as news networks and local news stations.
“I am so proud of our congregation for being so generous. It’s a modern-day miracle. It’s a gift to the entire community and proof that something good can happen to you,” said Khabeb.
“It was an honor to help her. I told the story to my real estate closers, and they all came in to cheer her on,” said Seifert. “It’s a heartwarming story, but it’s a shame that to have a heartwarming story, it takes heroic efforts to make things right.”