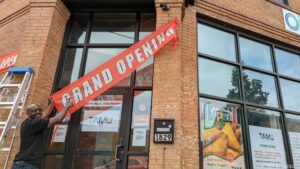 The long-vacant Viking Bar location on Riverside Avenue has finally attracted a new resident: TAMU Grill and Catering, with a Kenyan fusion menu. Owner George Ndege, aka Chef JoJo, was formerly known as both the host of KFAI’s African Rhythms and a caterer of African food, both of which he and his family will continue along with running the restaurant. With their grand opening in early July, TAMU(“delicious” in Swahili) will be open Wednesday through Sunday, serving food described as a fusion between (deep breath) Kenyan, West African, Indian, Southeast Asian and Middle Eastern cuisines. (Sounds great, actually. Watch this space, I may review it.)

The highs and lows of local celebrity restaurateurs

Justin Sutherland, our local mega-celebrity chef who seems to be everywhere (he’s mostly known as the genius chef behind Handsome Hog but that’s far from his only gig) was grievously injured in a boating accident on July 3. He sustained propeller 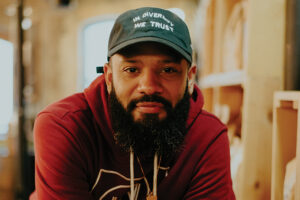 injuries on one arm and the side of his face. He needed surgery that involved wiring his jaw shut for six weeks. There is an ongoing Medical Recovery Fundraiser for his medical expenses (like most restaurant workers and indeed many owners, he was not insured).The fund is about halfway to its goal, so do contribute if you can. gofund.me/57674b61

Kim Bartmann, owner of a mini-empire of restaurants including Barbette and Tiny Diner, was tapped by Wisconsin-based Wilson Hotel Group to run the food and drink space in their boutique hotel under development in downtown Minneapolis. The hotel is part of a chain of small hotels called Indigo Hotel and is going to occupy the former Crowne Plaza spot on 2nd Avenue. The hotel-based eatery will be co-managed and developed by the Bartmann group and Wilson Hotel Group and will be called Star Bar & Bistro. It will be Bartmann’s first foray into downtown.

As promised last month, I am reviewing the Eat for Equity meal kit. I accidentally got a full-size kit instead of a half-size kit. Half-size kits are made for couples, full-size for large households, and I am a singleton who almost always eats alone, so it took a bit of creativity, juggling and freezer capacity to do this but I did it.

For my two “mains” I got:(1) pasta with vegan meatballs and marinara sauce, and (2) smoked tofu with rhubarb BBQ sauce. The pasta consisted of a box of dried macaroni in an upscale brand, and everything else was in-house, chef-prepared. For my two sidedishes, I got:(1) grilled asparagus with romesco, and (2) mac and cheese with potatochip panko crust. For my salad-soup-bread choices I got:(1) a loaf of Laune sourdough bread, and (2) a watermelon and smashed cucumber salad. For my single (but very large) dessert, I got mixed berry crisp with real whipped cream. For a free gift, I got a bottle of homemade hibiscus syrup.

The only thing gone quickly was the syrup, which I mixed with seltzer water and drank within two days. The meatballs and marinara spent over a week in the freezer before being cooked and divided into three humongous portions. I am close to finishing that and the bread. So all in all, the kit has majorly supplemented my meals for almost three weeks now.

I will rate the things in descending order of yumminess: 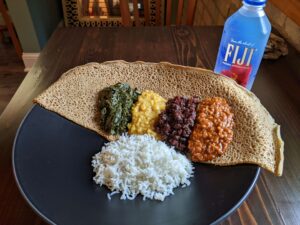 I discovered this new place at 2223 E. Franklin Ave. (where a coffee shop was before the pandemic) when I attended Open Streets. I was fainting from hunger and also quite hot and thirsty. When I saw that it was more than just a coffee shop, I decided to get a meal. I got the small Ethiopian Plate and was offered an unlisted drink item – a house-made sweetened hibiscus iced tea – which I happily accepted, and it was just what I needed. I finished every bite of the lovely, all-vegan, beautifully-but-not-aggressively-spiced items with injera and white rice.

Later I read about it on the E-Democracy forum for Seward neighborhood. Neighbors were all very happy to have this new dining place on the avenue, where places to get a drink or a bite to eat are getting quite thin on the ground. Everyone agreed that the Ethiopian food offered there (not the only kind of food, though) was better than at a number of larger, more well-known places. But the owner put “Bar” in the name because he was trying to get a liquor license, and apparently the city is being weird about it. So neighbors in Seward are trying to flex their muscle and clear the path for a bar to open along with the bistro. For now, although you can’t get an alcoholic drink, you can get some really tasty food at SheRoyal.