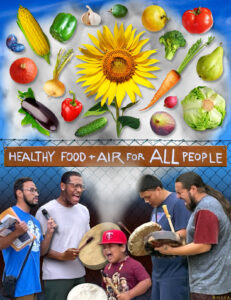 It’s time.
“It’s time,” the people of the East Phillips neighborhood are saying.
It’s time the city started taking itself seriously and started believing some of the things it’s been saying about the environment and equity.
In 2019, Mayor Jacob Frey said, “Minneapolis is doing nation-leading work on climate change. Now we’re taking the next step by formally declaring a climate emergency. In the coming months, we’ll be moving forward with a new sustainable building policy and moving to adopt a social cost of carbon.”
Fine.
The East Phillips Neighborhood Institute says, “Fine.”
According to Council Member Jason Chavez, the city is planning to demolish the Roof Depot building sometime in October or November. EPNI, speaking for the neighborhood, wants to be assured that the arsenic-contaminated soil is removed in such a way as to not spread the dust all over the neighborhood. They are frustrated with negotiations. The number of parking places the city is planning for their diesel-polluting trucks has increased from 60-some to 80-some. If Frey and the city are serious about pollution and the environment, then stopping increased carbon pollution by city trucks in one of the city’s most carbon-impacted neighborhoods would seem to be a good place to start.
EPNI wants to be involved in planning the job training program, and they want new hiring to give some kind of preference to people living within a two-mile radius of the site.
The Southside Green Zone Council was created by the city in May of 2019. In their August 2019 letter to the City of Minneapolis, they said: “The environmental disparities we face as a community have been institutionalized through decades of planning, decision-making and investment patterns that have sacrificed the health and well-being of our community and families. We hope that the next generation of investments by government, philanthropy and private capital will work to fix this history and be done in partnership with the Southside Green Zone and other critical local groups already doing work in the area. A much higher level of government and philanthropic resources is needed to achieve the sustainability and climate vision of the Southside Green Zone, a transition that must be grounded in justice. This is articulated in the Southside Green Zone’s priorities on tangibly improving Air and Soil Quality, Healthy Food Access and Health in Energy in Housing intertwined with the social and economic priorities on Green Economy, Anti-Displacement, Self-Determination and Accountability. These all go hand in hand to ensure the people living here are benefiting and designing the investments in air, soil, food, housing and energy.”
The Native Lakota people drumming in the illustration above walked only a couple of blocks from their homes to the Roof Depot site where a rally was held to support EPNI’s negotiations with the city on Sunday, Aug. 28. The Little Earth public housing site was formerly an abandoned industrial site that probably included a coal yard.
If the city truly believes in racial and cultural equity and wants to be a leader in protecting the environment, then it will listen to the voices of EPNI and the people of East Phillips and treat those voices with the same respect they give to people from Linden Hills and Lake of the Isles.
It’s time for East Phillips to have a seat at the table.