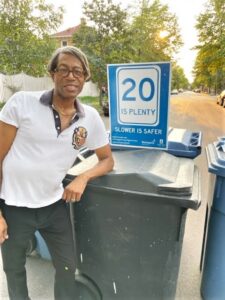 Goran (the G is pronounced as a Y) Gustav-Wrathall is taking direct action to calm 32nd Street around Powderhorn Park. He’s created his own little traffic circle that forces cars to slow down to go around it. He puts it up every night at 6 p.m. and takes it down at 10. “No one’s hit it. Everyone appreciates it is to protect the children. Definitely forces traffic to slow down to 20 mph.”
From the city: “The City of Minneapolis has established a new process to manage and prioritize requests for traffic calming measures on neighborhood streets, a system designed to be equitable, data-driven and transparent. Traffic calming measures are street changes that support slower and safer traffic speeds. The goals align with several City policies, including Vision Zero, the City’s initiative to eliminate traffic deaths and severe injuries on our streets. Examples of traffic calming treatments include street pavement markings, speed humps, curb extensions and traffic circles. The City will accept applications for 2023 implementation until Nov. 1.”
Goran and the neighbors at Parkside West wrote to the mayor and their City Council member:

“We are neighbors representing what many of us refer to as ‘Parkside West’ – very roughly, the blocks between Powderhorn Park and Chicago Avenue, bordered by Lake Street to the north and Wilder School to the south. There are abundant reasons we feel grateful to live in this community; among them are our diversity, our creativity, and our shared commitment to caring for our space and for one another.
“We are updating the letter signed at our National Night Out gathering making our case for Traffic Calming in our neighborhood. At an emergency meeting called last night, neighbors were searching for solutions to vehicle crimes plaguing our blocks. Thieves in one stolen vehicle chasing another vehicle blew through a stop sign and smashed a car with a woman and child, Aug. 26. We are sure that the tragedy would not have happened if the traffic circle we’ve been advocating for had been installed.
“Social media reports today that another armed carjacking occurred later last night within a block of our meeting. Our set of residential blocks is being treated as a ‘no enforcement, speed zone.’ 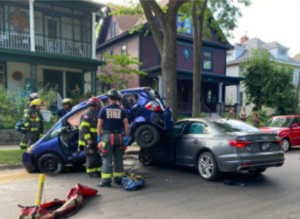 “We don’t see our concerns or our witness reports to police reflected in the accounts from the police made available to us. We don’t experience Public Works as responsive to our needs. Shattered glass litters the streets in the aftermath of vehicle smash-ups. Children play here. Bikes get flats here.
“Of course, our neighborhood and key focal point is Powderhorn Park. Summer nights are an especially vibrant time when individuals and families walk to the park from surrounding neighborhoods.
“With increased use, however, comes traffic. Several of us began meeting more than a year ago to discuss the surge in unsafe driving, particularly along 32nd Street and 10th Avenue. While longtime residents say that speeding has always been a problem near the park, we have all observed a sharp rise in vehicular recklessness over the past two years.
“Our concerns about traffic came to a boiling point at the end of 2021 when a car was stolen from the intersection of 32nd and Chicago with a one-year-old child in the back seat. Thankfully, the family was quickly reunited – but all of us, particularly those of us with young children of our own, agreed that action needed to be taken.
“We are deeply concerned that unless action is taken to calm traffic and protect pedestrians, such incidents will have deadly consequences. At the same time, we want whatever actions we take to convey a message of welcome, inclusion, and community for all who pass through our neighborhood.
“We therefore urge the city to consider the following solutions.
1. Protect pedestrian/bike crossing at the three-way intersection of 32nd and 10th. Immediately add stop signs on 10th Ave. This is a major gateway for pedestrians entering and exiting the park. Many travel in large, multi-family groups with young, loosely monitored children interspersed. Groups often leave the park in waves after dark when volleyball and soccer games finish. At present, the intersection is only controlled by a single, often ignored stop sign on 32nd. That means anyone accessing the park must cross 10th with no protection.
2. Immediately add stop signs on 32nd St. at Elliot pending installing a traffic circle at the four-way intersection of 32nd and Elliot. The Elliot circle would force drivers to slow down before they reach the critical crossing to the park. Similar circles already exist in many residential areas of Minneapolis. It is important to us that the circle not be seen as a barrier, but a symbol of welcome and beauty for all who pass through Parkside West. As neighbors, we commit to care for the circle by cultivating a garden, displaying occasional works of art, and performing basic maintenance for the duration of our residence here. We would like Parkside West to be seen as a gateway to Powderhorn Park.
“Thank you for acting promptly on our requests. We welcome the opportunity to speak to you about the issues we are observing and our hopes for a safer, healthier, more welcoming Parkside West.

“With respect and gratitude and urgency,
Neighbors of Parkside West”