The city of Minneapolis is now holding a series of listening sessions regarding the development of the intersection at 38th and Chicago. These sessions are similar to those held regarding the future of the Upper Harbor Terminal. In the case of 38th and Chicago it is apparent that the city has preliminary plans that they have not fully revealed. If the first session is any indication, then residents and other people concerned about the future of the intersection don’t have enough information about the city’s plans to voice concerns. Consider this:
a) The first session was hosted by the Department of Public Works whose representatives noted that their prime responsibility was to pave the streets and sidewalks whenever a plan was approved. Citizens’ concerns need to be answered by all relevant city departments, such as the new one responsible for public safety.
b) The development of 38th Street as a viable community street has always been problematic and lacking in a commitment of resources to bring it to fruition. The 38th and Chicago intersection, in part due to the death of George Floyd, is a prime opportunity to anchor development in South Minneapolis, yet the city has been mute as to its interest, ideas and resources to be committed to meet community input. Its principal response has been to route traffic around the citizens’ memorials at 38th and Chicago and adjacent intersections. 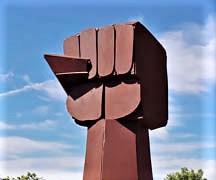 The prominence of 38th and Chicago commands all city department heads (not just staff) and particularly the mayor’s office to provide the needed presence and leadership as part of the community listening sessions.
South Minneapolis does not need to repeat the problems at the Upper Harbor Terminal where, it was apparent from initiation, the city had already committed to irreversible actions. These were antithetical to the community needs presented during those listening sessions, which were not negotiable, and which lost a major investor much needed for the Northside.
The city needs to lay its cards on the table and participate with Southside residents in a joint effort, rather than manipulate the discussion so as to direct the results.