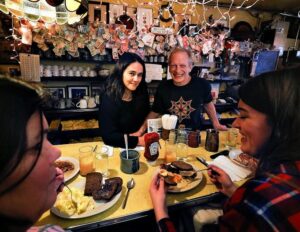 Alison Kirwin became the new co-owner of Al’s Breakfast in 2016, with then co-owner Doug Grina

In a piece titled “Will density save Dinkytown?” Tina Nguyen for Twin Cities Business magazine examines the impact of 6,000 additional multifamily housing units in less than 10 years, as Dinkytown and other neighborhoods surrounding the University campus undergo massive development booms. These dwellings and complexes are geared toward students and young recent graduates. Area business owners, however, point out that their businesses could never survive on students alone.
Another piece on the subject looks at the density boom as the result of the U of M changing from a commuter university to a more residential campus. Why might this be? One possible factor is that there used to be a stark difference between state resident and non-resident tuition fees. More out-of-staters require more campus housing. Still another piece proposes that it’s not all students in those new apartments, regardless of who they were intended for; the average student can hardly afford them. I suspect the truth is some mixture of all these.
The density dilemma is manifold. Do you have lots of parking to attract customers from the whole city, or make the area as walkable as possible by discouraging car traffic? Should new businesses be appealing to everyone or to a discriminating niche, and if so, which one? How can a business promote a frugal, minimalist lifestyle, and still survive in a growth-oriented economy? Below we will look at some actual businesses, new and old, present and past. But first… 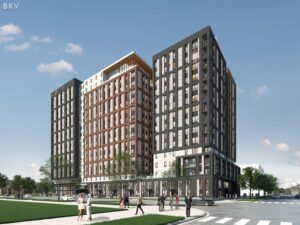 The biggest residential swoop so far – The Standard

It’s in the design stage now, but almost certain to be built – a 17-story residential tower that would take up most of a block in the heart of Dinkytown. The developer is Georgia-based Landmark Properties. The architect is BKV Group. According to a development tracking site constructionjournal.com, plans were submitted to the city for approval in June. If and when completed, this project alone would add another 1,000 residents to Dinkytown.
Documents submitted to the city planning department in December of 2021 state:
“The site is located in the Dinkytown neighborhood [and] comprises one half block … currently occupied by several smaller multiple family buildings. The site has street frontage along 14th Avenue SE, 6th Street SE, and 15th Avenue SE.
“Applicant is proposing to demolish existing structures … to construct a new 17-story residential tower with 324 dwelling units [to] include walk-up units along the exterior of the ground floor… The proposal would incorporate 211 structured parking stalls in one level of underground parking and two levels of screened above-grade parking.” 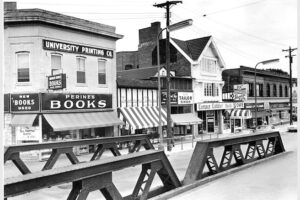 TargetExpress has been in Dinkytown for nearly nine years now. The logic of the growing “residentialization” of the U of M campus means Dinkytown and other peripheral zones of dense student housing need such an all-purpose store where you can get prescriptions, kitchenware, notebooks, batteries and shoelaces any day of the week, and without waiting for delivery. Seen as a death knell for the character of the neighborhood at the time, maybe Target was simply prescient about the changes coming to Dinkytown.
A walkable neighborhood needs services. One such example is Dinkytown Optical, at 1411 4th St. SE, which has been in business for 50 years (but moved a block east in 2018). They have a very loyal customer base, and nearly all 5-star ratings on Google and other platforms.
Erik’s Bike Board and Ski takes care of servicing your bike and more. It has been in business for 45 years, having famously been founded when Erik himself was only 13 years old! Hair salons and barber shops ebb and flow in the neighborhood. There is now a Great Clips for a nice economical haircut for any gender or age, located at 1311 5th St. SE. 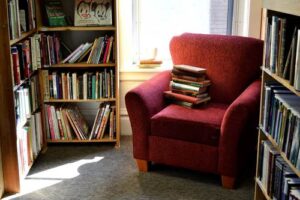 The Book House and Dinkytown’s history as a literary hub

Students, learned scholars, and businesses oriented to books are a natural fit for the area. So it’s no surprise to learn that Dinkytown has been a repository, haven and incubator of literary pursuits for over a century. Central to this network of readers and writers is the Book House, the only remaining book store from many in the past half century. The website preservehistoricdinkytown.org in its History section has a page called “Literary Roots of Dinkytown.” This is what it says in part about the Book House:
“The Book House was founded in 1976 by two bookseller couples, whose main business had been selling academic books and collections to libraries: James and Kristen Cummings, and Dr. Rob and Lynn Wozniak.”
This is what is referred to as the “Old Book House” before it downsized and moved from the House of Hanson building to the second floor of Dinkydale. At one time it contained over 120,000 books and other media. In 2014, the first year I wrote about Dinkytown, I interviewed the last remaining of the four original owners, Kristen Cummings, who was by then Kristen Eide-Tollefson and a leading member of the Dinkytown Business Association. The next year, Eide-Tollefson began to retire, turning over the business to long-time managers Matt Hawbaker and Ryan Hinderaker. 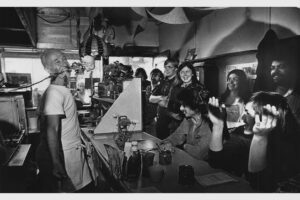 The restaurant stalwarts of Dinkytown 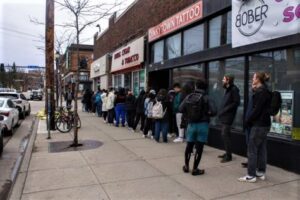 Customers in line at CrunCheese Korean Hotdog in April 2022

Beyond the stalwarts – the ever-changing food scene

Turning now to restaurants that are more ephemeral, or may be stalwarts of the future but have not yet passed that test, we will first mention some recent ephemerals, some mourned and some not so much. (One “health food restaurant” that sprang up and disappeared in a span of months turned out to be another of those detestable Herbalife scams, so good riddance.)
Much more significant and sadder, in my book, is the loss of the University Food Court, which was struggling to launch when the pandemic hit, bravely opened and did some business for a couple years, but closed permanently in May. I had sampled and reviewed its inaugural restaurant, Avocadish, which I liked very much. And it was a good idea, at least on paper.
Another restaurant that has been a stalwart (but has changed names and ownership) closed in July – Gray’s Restaurant, formerly the Loring Pasta Bar. Its last name was homage to the fact that its location 50 or so years ago was Gray’s Drugstore.
Saddest of all for me, Camdi Restaurant closed in this past March. Not only was it a Dinkytown stalwart, and for me a place with fond memory associations, but it was also one of those old-school Vietnamese places that are becoming an endangered species in the restaurant ecology.
But there are lots of promising new places as well. Places that have opened in Dinkytown in the past four to five years and seem worthy include K-Bop, Banh Appetit, Pho Mai, JJ’s Poke,CrunCheese Korean Hotdog, and Raising Cane’s. A little older, with definite signs of staying power, is Lands End Pasty Co. in Dinkydale.