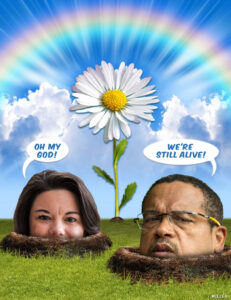 Shout hallelujah and just get happy
We’re going to the promised land
We’re heading across the river
Soon our cares will all be gone
Forget your troubles, come on get happy
You better chase all those blues away
Shout hallelujah, c’mon get happy
Happy days are here again!

Keith Ellison and Angie Craig made it.

And the DFL picked up one more state Senate seat, enough to control the Senate, the House and the governor’s mansion.
We have a right to grand expectations.
We want codified into law and proposed as an amendment to the state Constitution that a woman has sole authority over her personal health decisions.
We want free community colleges.
We want tax reform that gets us away from sales taxes (that tax everyone the same) and moves us to a more progressive income and corporate tax (that taxes everyone on their ability to pay).
We want an immediate legalization of marijuana, and all people serving sentences for possession of marijuana must be immediately released from prison.

The state of the world in South Minneapolis

In an online campaign town hall last spring, Gov. Tim Waltz said that he was not going to pander to the metro area because they think they are so important. This explained a lot of his behavior over the last four years. On Tuesday, he received over 400,000 votes in Hennepin County and over 155,000 in Ramsey County. This total of 555,000 is close to half of the 1.2 million votes he received statewide. I would hope that the metro senators and representatives would remind him of metro support going forward.
The DFL swept the Southside Pride area, and with the election of Zaynab Mohamed to the Senate and Samantha Sencer-Mura to the House we have two new progressive members for us to support and keep accountable.
In Hennepin County, Commissioners Irene Fernando, Marion Green and Angela Conley were easily re-elected. Dawanna Witt was elected sheriff, becoming the first woman and the first person of color to serve in that position.
In a hotly contested race, Mary Moriarty defeated former judge Martha Holton Dimick in the important Hennepin County Attorney race. Moriarty, the former head county public defender, was a controversial figure. She boldly took on the county administration and was vigorous in defense of the indigent clients her office represented. She was called too progressive, too anti-police, as well as arrogant and domineering in her office. These last two traits would certainly not be as negative were she a man, IMNSHO.
We have a good group of progressive elected officials in our South Minneapolis enclave. With very slim DFL majorities in the House and the Senate, we have seen how organized small caucuses can have significant influence. Remember Joe Manchin? Will the progressive caucus, the metro caucus, or perhaps a Democratic Socialist caucus help us with housing, health care, transportation, climate change, and maybe some legal weed this session?

Twin Cities Democratic Socialists of America continues to refine its electoral strategy, both with respect to endorsement of candidates and ballot initiatives and with respect to holding “our” electeds accountable and using electoral work to further build a movement of working-class empowerment. We reaped some rewards on election day for all our hard work.
In 2022, due to weird timing and other things, we ended up doing three separate rounds of endorsements, including one after the primaries. In all, we
endorsed seven candidates, but one – Sheigh Freeberg who was opposing Sandy Pappas for state Senate District 65. In a rare loss for us (since 2016 that is, we always lost before that), Freeberg, who is a member of Twin Cities DSA and a stellar labor organizer, lost the primary to Pappas.
We then made two more endorsements, including only our second ever suburban endorsement, so that heading into Nov. 8, we had a slate of six endorsed candidates:
• Omar Fateh, incumbent and DSA member, for state Senate District 62.
• Zaynab Mohamed, DSA member, for state Senate District 63.
• Samantha Sencer-Mura, for state House District 63A.
• Athena Hollins, incumbent and DSA member, for state House District 66B.
• Mai Chong Xiong, for Ramsey County Commissioner, District 6.
• Aaron Wagner, DSA member, for Robbinsdale City Council, Ward 4.
All six of our candidates who made it through the primary, some with our help and some before they were endorsed by us, won in the general election.
DSA’s statewide Senate caucus will increase by at least one and there can start to be a new DSA presence in the House as well. We have our first endorsed and elected county commissioner. Aaron Wagner will bring a new progressive and socialist voice to Robbinsdale city government.
We haven’t established our legislative and city and county priorities for 2023 yet, but all DSA candidates currently in office at the state level are committed to two things especially – fully funding public schools to reverse the ongoing loss of students and the teacher and assistant shortage, and strengthening the laws protecting labor and unions.

The newly elected Minneapolis school board of experienced teachers and engaged parents is united by a commitment to equity united all the new members.
Collin Beachy, a 16-year special education teacher, won an at-large seat with the highest vote total (62,000+). Committed to “transparency and bringing the public back to our schools,” Beachy hopes to find a new school superintendent with urban experience and collaborative skill.
Sonya Emerick. a strong parent advocate for their son with disabilities, won the other at-large seat with 52,365 votes. They emphasized “equity and making sure all our children have access to education.”
Veteran math teacher, Lori Norvell defeated Laurelle Myhra to represent south Minneapolis. She said, “Minneapolis schools must remain on track to turn around literacy” and “be really serious about bullying.”
Two candidates with children in Minneapolis schools ran unopposed. Incumbent board member representing northeast Minneapolis, Abdul Abdi, a software engineer, hopes to “improve relationships between parents, schools, teachers and communities.” New board member representing south Minneapolis, Fathia Feerayarre, a postdoctoral student in public health, said, “This country is a melting pot. Schools – especially our public schools – should accept everybody and welcome everybody.”
School board meetings are at 1250 W. Broadway Ave. in north Minneapolis. The public is welcome to attend or watch on cable access TV channel 16 or online. Sign up for notices of meetings is at https://boardmpls/k12.mn.us.