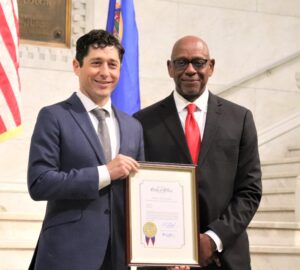 What’s happening with crime?
What’s happening with the police?
The murder rate is actually down from last year. It feels a lot safer. There’s lots of chatter on Nextdoor about strange cars in the neighborhood and Ring camera videos of people stealing packages from front steps. The wide use of surveillance cameras makes people feel they have greater control over their communities. They can see what’s happening. They can tell their neighbors. They can report it to the police. Their video is evidence that could be used to convict someone of a crime. If everyone has access to the videos and if anyone can record events on their property, then surveillance cameras can be a force for building community. But if only the government controls surveillance, then surveillance cameras quickly become an instrument of oppression. So far, surveillance cameras seem a force for good.
Tony Bouza, in his valedictory essay next month, says, “Cops are irrelevant to crime levels—poverty and racism are not.” But we do know that the presence of cops is a deterrent to crime. When he was chief of the Minneapolis Police Department, Bouza used single-officer patrols to increase police presence on the street. In the 3rd Precinct, Inspector Gomez is using some single-officer squad cars to increase police visibility in South Minneapolis.
But Mayor Jacob Frey has created probably the most profound change in policing in Minneapolis history. He has essentially abolished the “Wild Bunch” mentality of the old station house—where cops were comfortable making racist jokes and whuppin’ ass. The creation of a Department of Public Safety changes all that. Cops are now part of a team, along with Fire and Public Health, that looks after public safety. There’s much greater scrutiny, more people looking at your work.
The idea for a Department of Public Safety came from the charter amendment proposal that failed. Frey ran against it and won, and then the first thing he did was to appoint two women who ran against him to an advisory committee to tell him what to do about the MPD. They said to set up a Department of Public Safety.
So Frey did it. He got the whole thing rolling—got City Council approval; hired Cedric Alexander as director (look for an exclusive interview with Alexander by Kay Schroven in next month’s Southside Pride); hired a new police chief; and he seems to have made everyone happy for the moment.
Congratulations are also due to Dave Bicking and Communities United Against Police Brutality for fighting and winning the right for the public to know about public meetings discussing labor policies between the city and the Minneapolis Police Federation.
The biggest riddle still unsolved is what to do about the precinct station at Lake and Minnehaha. Should we rehab and restore the old building? Or should we find a new place for a station house?
The argument against rehabilitating the old structure is that it might look like we’re resuming business as usual. It would take a powerful exorcism ceremony by Frey to restore public faith in the 3rd Precinct’s pledge to protect and serve all the people of South Minneapolis. There won’t be much enthusiasm from council members representing wards in the 3rd Precinct for picking a site. They’re running for re-election next year. So don’t expect any decision to come down soon.