The many ways to celebrate Thanksgiving 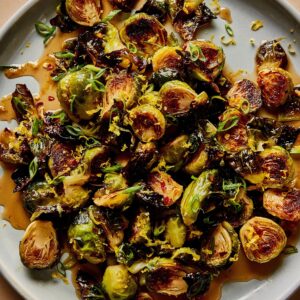 My favorite online food information source, Eater.com, has a seasonal series of the above name and theme. So far, Bettina Makalintal has counseled us to let go of ironclad tradition and have a different kind of meal every Thanksgiving, Hillary Dixler Canavan extolled the glories of branded and boxed foods, especially the simple comfort of Jiffy corn muffin mix, and Amy McCarthy has warned that “Your Holiday Dinner Is In Trouble!” due to shortages of turkey, crab and even butter.
Jaya Saxena, in the introductory piece for the series, writes: “Thanksgiving is usually hailed as a time to lean into comfort food. In the public imagination, ‘comfort food’ is pretty narrowly defined, but it becomes even more so around a holiday with such colonialist roots. The dishes that are supposed to bring you comfort around Thanksgiving are things like mashed potatoes, cranberry sauce, and turkey with gravy — regional Northeastern cooking that’s shed any connection to Indigenous American cuisine in favor of a pretty white history.”

The messages from Bettina, Hillary, Amy and Jaya all resonate with me for several reasons. I have had a disruptive history in relation to Thanksgiving.
From 1956 to 1984 I was living as an unrepentant Yankee in the heart of the American “Old South,” hyper-aware that my family’s holiday traditions were different from both our white Southern neighbors and our Black Southern acquaintances (and these were different from each other, but not as much as ours were from both).
In 1975 I was making my first attempt to cook the family Thanksgiving dinner in my and my husband’s brand new (old) little bungalow in Atlanta, when I went into labor with my first child and had to leave the turkey on the counter for my mother to come and rescue. I didn’t have a Thanksgiving meal at all that year.
From 1987 to 1998, I spent every Thanksgiving but one at a vegetarian potluck at the Liberal Catholic Church on Pleasant Avenue in South Minneapolis. I usually hate potlucks, but I loved these, and I loved the eclectic nature of the meals, and the crowd of lovely people I came to know by only seeing them once a year.
From 1998 to 2010, I spent every Thanksgiving but one in England, where they don’t celebrate Thanksgiving. But I think I discovered the roots of Thanksgiving there. Protestant churches in England have a designated Sunday called Harvest Home, with a special celebration in the church, followed by home gatherings with harvest-based feasting. Turkey and pumpkin play a big role. It’s purely a religious holiday, so there isn’t a huge wave of associated marketing, which is nice. (Maybe because less than 10% of Brits are Christians and are even aware that this holiday exists.)
Since I have been back in the U.S. and fallen under the sway of the Sioux Chef I have thought a lot about decolonizing food, and even Thanksgiving, the most settler-colonial civic holiday you can imagine. There are three pathways to decolonizing Thanksgiving – one for the colonized, i.e., the Native Americans; one for the colonizers, i.e., “white settlers” such as myself; and one for the diasporic people who are neither of the above. (Of course, many of us are hybrids of two or three of these categories.) So the conclusion is – reject tradition, unless it’s a tradition that you love and that doesn’t harm anyone, and then embrace it. 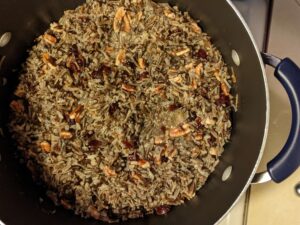 Wild rice with pecans and cranberries

Thanksgiving and all these “family” holidays could do with being less stressful on the planners and food providers, often the women. My years of vegetarian Thanksgivings gave me some great ideas. One of my go-to dishes was a sort of pilaf of wild rice, baked in a casserole dish. It never had a formal recipe (few of my dishes do) but consisted of squash cubes roasted separately, onions, celery, pecans and sage, stir-fried separately, and real Native American-produced wild rice, boiled separately, and cranberries. These pre-cooked ingredients were combined in a hotdish and baked on low for a half hour.
Another great dish that I don’t wait for Thanksgiving for, but eat the entire time it’s in season, is roasted Brussels sprouts. My favorite method is to trim and halve the sprouts and toss them to coat in a big bowl with olive oil, Spike, salt, everything seasoning, and nutritional yeast, and then air-fry them until they’re tender inside and crispy outside. They’re vegan, but then I mess that up by adding a side of aioli for dipping.
Another way to reject tradition is to get your meal catered. Reverie has a great family spread that’s all-vegan. The various co-ops also cater sides and some also include cooked turkey. For more don’t-do-it-yourself ideas, check this article on twincities.eater.com – “These Twin Cities Restaurants Are Offering Thanksgiving Take-Home Feasts.”