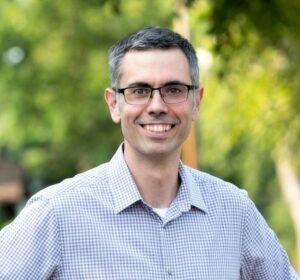 Thank you, Andrew Johnson—for being so polite and friendly and helpful. Thank you for always standing for the most progressive ideas, for standing for change when change wasn’t easy, and fighting for it when it was needed.
Andrew Johnson has announced that he’s not going to seek re-election next year. He will have served 10 years by the end of next year. That seems to be about the right amount of time for public service. Of course, many politicians believe elected office is their true and only calling, and they stay there forever. But Johnson has a young family, and being an elected public official can take time and energy away from the duties of parenting. We look forward to his final year, and we wish him well in his deserved retirement.
Nancy Ford ran a spirited campaign for 12th Ward City Council last year.
Jerome Evans has already announced his candidacy for City Council in the 12th Ward. He will host an official campaign kickoff at Venn Brewing at 11 a.m. on Dec. 3, where he will discuss his vision for “a Minneapolis that’s committed to justice and safety, protecting our health and environment, supporting local business, eliminating racism, and inspiring transformative change.” It will be nice to get Evans away from glittering generalities and into specifics, but that can happen later in the campaign.
One priority that Southside Pride has advanced is cleaning out the sand that the city puts on streets to stop us from sliding into each other. This sand washes down the storm sewers all the way from Lake Street and Chicago Avenue and ends up in Lake Hiawatha and Minnehaha Creek. The city needs to dredge the lake and creek. Remove the sand. Dredging the creek from 27th Avenue to 34th Avenue could lower the level of Lake Hiawatha by a foot and reduce flooding, and dredging the lake could return it to its original depth of 33 feet. Right now, there’s a sandbar in front of the storm sewer that empties into Lake Hiawatha. Restoring the lake to its original depth will increase clarity and make it safe and fun for swimming again.
We look forward to a vigorous campaign for City Council in the 12th Ward, and we are grateful for the wise and kind stewardship of Andrew Johnson.