Food and restaurant news, plus a mini-review: Meritage 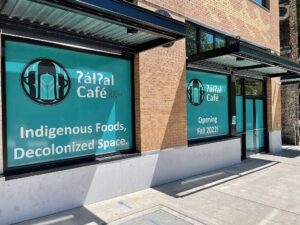 Bowl and a roll, Red Cup Rebellion, and more

Why didn’t I know about a “bowl and a roll’’? Because I’m not a true Midwesterner. In case you’re also not a Midwesterner, defined as not going to little-kid school here, a bowl and a roll is a counter-intuitively delicious combo of chili with a side of cinnamon roll. I’m game to try it. See if it’s as good as advertised even without the nostalgia factor.
The national edition of Eater.com covered the Starbucks Workers United (SBWU) nationwide one-day strike at 111 locations coinciding with Starbuck’s big promotion called Red Cup Day on Nov. 17. This was a gift in terms of naming their campaign, so it became the Red Cup Rebellion, and SBWU strikers had their own red cups and shared free coffee with sympathetic would-be patrons and supporters, like my own DSA local, which sent out a squad of members signed up for strike support, as well as amplifying SBWU’s message on social media. This was in response to retaliations Starbucks has carried out against both stores and individuals, actions which are illegal, but often unpunished.
Twin Cities Eater (twincities.eater.com) on Nov. 8 had a piece on Twin Cities grocery stores with nice cafes inside them. Although I found it a bit too slanted toward fiery ethnic cuisines in funky and tiny ethnic groceries in the suburbs, and not always as advertised (e.g., United Noodles does sell ready-to-eat food but only to-go, which is not the same as having “a nice cafe inside”) it does mention one choice in Minneapolis which I agree with – Seward Co-op. Again, it’s not exactly a cafe, but at least you can sit and eat at both locations, after grabbing refrigerated deli items, hot bar or salad bar, and drinks, including excellent coffee.
Seattle’s local version of Eater.com had a Nov. 15 piece about the growing “decolonizing” Native American eateries scene, centering on three that have recently opened there: ?ál?al Cafe, Off the Rez, and Native Soul. I am glad to see there are others springing up to keep our own beloved and groundbreaking Owamni company.
Finally, Mpls.St.Paul magazine had a Nov. 18 piece by Stephanie March on new local cookbooks (“4 New Cookbooks We’re Craving”). One is something I mentioned a while ago – Justin Sutherland’s “Northern Soul” (southern-inspired home cooking, $30). The others are:
•“True North Cabin Cookbook” by Stephanie Hansen (published by the Minnesota Historical Society, $30).
• “Emily’s Fresh Kitchen” by Emily Maxson (gluten-, grain- and dairy-free dishes, $35).
• “At Home” by Gavin Kaysen (a glimpse at the home cooking of an immensely successful chef-restaurateur, $35).

Mini-review No. 1 – Wherein I lost my lutefisk virginity

The publisher of this paper, or as I call him, My Last Boss, cajoled me to attend the American Swedish Institute annual lutefisk dinner. But it’s OK, I survived. However, as sagas do, this saga got to be very long, what with the centuries of lore and my predilection for going down rabbit holes, so see the companion piece titled “Presumed non-Scandinavian encounters lutefisk.”

Mini-review No. 2 – Birthday dinner at Meritage 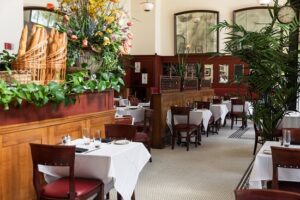 On Nov. 5 I turned 70. My daughter Aimee was in town with her smooth and accomplished boyfriend Doran and proposed to take me out to dinner “somewhere nice.” Remember back in May when I reviewed a 60th birthday celebration at Creekside Supper Club? The visit was in April of this year, and the birthday was that of my good friend Patricia, and it occurred because her hubby Russ had messed up and booked himself to play a gig on his own long-time wife’s 60th birthday. (Men. Honestly.) So for my 70th, we were a party of five: me, Aimee, Doran, Patricia and Russ. We had a reservation at Meritage.
I had a starter of butternut squash puree soup with a swirl of creme fraiche. Most of their dishes hewed pretty closely to the traditional French bistro fare of the past century but this was one that did not. (Another was the starter I was going to get before I heard about the soup, which was an off-menu special. That was the delightfully named “Tiny Tuna Tartare Tacos.”) Most of the others started with wine, but I was saving my alcohol allotment for dessert, so I had iced tea. Just like a southern American tourist in Paris would. 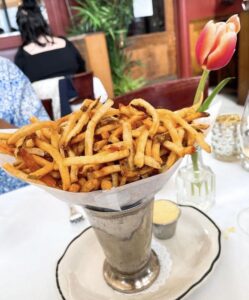 For my main, I had the crispy all-natural half chicken, accompanied by even crispier (and perfect) roast potatoes, spinach and garlicky chicken jus. Aimee had duck a l’orange which came with duck-fat potato gratin and roasted broccolini, and I accepted a few tastes of her broccolini, which I love. Doran had risotto with duck confit and Patricia and Russ shared plates with an order of moules frites (mussels and French fries, quite similar to what I raved about at Creekside, but there they used champagne and cream while Meritage used pancetta, tomato and white wine, which I would not like as much) along with red-wine cooked lentils and a couple of other sides and apps. The frites, as is the custom these days, came in a massive cone placed upright near the center of the table, for easier sharing, which we all did. The dipping sauce was my favorite of the classic French sauces, bearnaise.
I was feeling quite replete at the end of that. Then came dessert. I honestly have forgotten if the others had dessert or not. I seem to recall Russ ordered a dessert wine. I think Doran and Aimee split some dark chocolate thingy. Meritage does have desserts: profiteroles, ice cream, mousse au chocolat, crème brulee. For my dessert, I had a cocktail called the Meritage Manhattan, consisting of cognac, kirsch and orange bitters.
Meritage was more casual than I expected, and though not cheap, it is far from being the most expensive place to have a fine meal. Their alcohol selection is wide and accommodating, with French and American wines, local and international beer and cider, good cocktails and some alcohol-free options like the Phony Negroni, spritzes with bitters and fruit, and a sparkling plum shrub. The site is very romantic, next door to Park Square Theatre (in fact, sharing a building) across the street from the beautiful Landmark Center, and boasting valet parking. I highly recommend it.