Holy Days of winter – we will survive 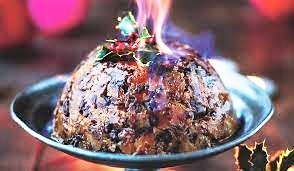 This will be my personal ninth Holiday article in Southside Pride. I seem to take longer to write these than any other pieces I write, whether that’s because of or despite the fact that I feel somewhat ambivalent about holidays.
To tell the truth, I feel ambivalent about a lot of things that normal people have strong opinions about: religion, love, democracy, sports, Marxism, and the Kardashians. Whereas I have strong opinions on things normal people take for granted: a hatred for ketchup, bacon, perfume, firepits, and child slavery in the chocolate industry, and an obsessive love for owls, used books, nutritional yeast, and grandchildren (not just my own, but all of them).
So if the topics I have covered within the broad overarch of “Winter Holidays” seem eclectic, or even random, perhaps it’s the desperate attempt of someone feeling ambivalent to find something relevant to say. Here are the subtopics of the last eight Southside Pride holiday articles:
2014 – Don’t Let the Light Go Out – Comparing Christmas, Hanukkah, Diwali and lesser-known winter holidays and their focus on sun and light.
2015 – 50 Ways to Tame Holiday Consumption – Ideas for taking consumption down a notch and having a rich and traditional holiday while practicing deep environmentalism.
2016 – Did Jesus Celebrate Hanukkah? – A deep dive into the Judaism of Jesus while also gently poking fun at the “War on Christmas” crowd. 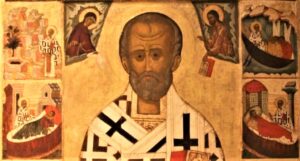 2017 – A Visit From Some Solstice Ghosts – A retelling of “A Christmas Carol” as a dream I claim to have had where the ghost of my late friend Kristi visits me, and we learn about the threat to the earth and the future of humankind.
2018 – Becoming the Kindly Ghost – Considering ways to reflect on your legacy to future generations in the context of winter holidays.
2019 – Redemption – A cross-cultural consideration of theories of redemption, inspired by a Christmas ballad by Bruce Cockburn and the Islamic story of the birth of Issa.
2020 – Holidays Are Holy – How both holidays and catastrophes can 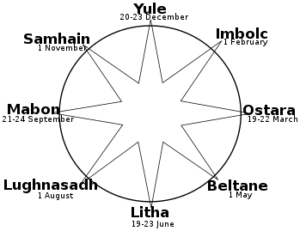 Wheel of the Year

cause us to re-examine priorities and stop taking things for granted; wealth inequality and the need for a clean-slate amnesty.
2021 – Getting Dark and Philosophical About the Holidays – A look into how people unconsciously time their deaths, how this reflects their values, and how sociology discovered this through death spikes and dips around holidays.
(If any of these pique your interest, you can type linktr.ee/dkramage into your browser address line to get a page with links to all the previous eight articles online.)
In the process of perusing these pieces, you can find such gems of knowledge as these:
How a malevolent spirit named Lussinatta became transformed into the sweet young girl we know as Santa Lucia.
How “A Christmas Carol” is not the only ghost story associated with 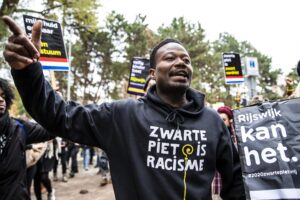 The Dutch version of Krampus, “Black Peter,” will soon disappear because it’s racist.

Christmas, and in fact, in Victorian Britain ghost stories were always an integral part of Christmas.
The weird but true tale of Clyde Lott, who is trying to “immanentize the eschaton” (bring about the end of days described in the Book of Revelation) by breeding red cattle in Israel.
Why ancient civilizations in the Near East and Middle East didn’t need revolutions, but had this one weird trick to reset an economy plagued by wealth inequality.
How they celebrate the winter solstice in Iran, ever since the days of ancient Persia.
The amazing career of the American sociology professor known as “Doctor Death” for his decades of research into the intersection of death and holidays. 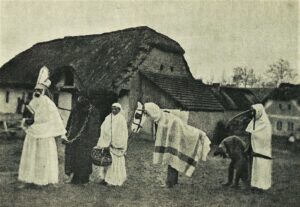 Looking at the list above, I notice a few tenuous thematic threads running between them. There is an assumption that all religions that are true religions are valid and there is no need for them to contend with each other. There is an assumption that religion, or lacking religion as some of us are, spirituality (defined as interest in the numinous and ineffable), is the source of our desire to celebrate holidays.
Even civic holidays like Independence Day or Thanksgiving are linked to the quasi-religion of patriotism. How is patriotism like religion? In both cases, it is a helpful boon to have, but in excess it becomes a cult, which is unhealthy both to the believer and especially to those whom he opposes as unbelievers.
I also notice a focus on history, and a preference for oddness, trivia and quirky things. This is probably more inherent in the writer than in the subject matter. But there are still lots of things I haven’t addressed. Even in the realm of the odd and trivial, is there really any limit to the strangeness of human behavior? I think not. Or as they say in Yorkshire, “there’s nowt as queer as folk.” 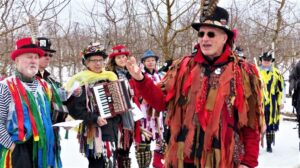 Wassailing is another custom inherited from Yule.

It occurs to me, not for the first time, that the real thread running through all winter celebrations, whether they are religious or not, no matter where on earth they occur, no matter whether they are lost in the distant past or recently created, is survival.
When the sun goes away, and the nights get long, and the crops are no longer growing, and the birds and butterflies have taken off for unknown equatorial latitudes, and most of the other mammals are hibernating, both ancient and modern humans become uncomfortably aware of their mortality. We don’t like to talk about our mortality or even think about it.
We sing about it, by singing a denial of it, like we sing about romance when we’re lonely, youth when we’re no longer young, and summer when it’s cold and bleak. Many Christmas carols offer the promise of immortality. We fill our larder with the harvest and a few months later, on the eve of the longest night, we defiantly eat most of it up in a huge public feast around a roaring fire, and maybe we drown our fear of death with brandy or mead. That too is a denial, feasting to ward off famine. 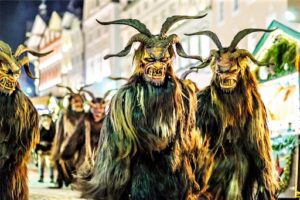 Filling in the gaps – a focus on the Nordic cultures

One of the traditions that I haven’t addressed much in earlier holiday pieces is the long, complex history of Yule. Yule is treated as just a quaint archaic name for Christmas these days, but Yule and its near relatives are older than Christianity. In fact, the word “yule” is thought to derive from “jol” (with the j pronounced as a y) which was an alternate name for Odin, the principal god of Norse mythology. Yule (as well as its many derivatives in various northern European countries) was celebrated for centuries before the Christianization of northern Europe. It was associated with Odin, the so-called Wild Hunt, the Yule log, Yule boar, and Yule goat, and a connected holiday the evening before Yule began, called Modraniht
(Mothers’ night) in Anglo-Saxon lands.
Most of the modern-day Christmas customs in northern Europe (and through colonial transmission, North America and much of the rest of the world) can be traced back to one or more of these Yule roots, while other Christianized holidays often trace back to ancient Rome or other pagan cultures. But other things unrelated to Christmas also came down to us from the Yule legends and customs. Echoes are found in folklore, songs and poems, in Arthurian legends, fairy stories, and the plays, operas and dances that derived from them. 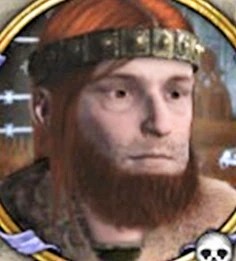 Haakon the Good is credited with merging Yule with Christmas.

It was a Norwegian king named Haakon I or Haakon the Good who was secretly a Christian when he became king, who partially Christianized Norway. Haakon had been fostered to Athelstan, a Danish king in present-day England. Parts of Britain had been Christian for about 200 years. The Wikipedia entry is interesting, especially the part about mandatory ale consumption!
The Saga of Hákon the Good credits King Haakon I of Norway, who ruled from 934 to 961, with the Christianization of Norway as well as rescheduling Yule to coincide with Christian celebrations held at the time. The saga says that when Haakon arrived in Norway he was a confirmed Christian, but since the land was still altogether heathen and the people retained their pagan practices, Haakon hid his Christianity to receive the help of the great chieftains. In time, Haakon had a law passed establishing that Yule celebrations were to take place at the same time as the Christians celebrated Christmas, “and at that time everyone was to have ale for the celebration with a measure of grain, or else pay fines, and had to keep the holiday while the ale lasted.”

Some of the Yule customs now reflected in Christmas

Modraniht – This was a “blod” (sacrifice) offered to female gods and demigods such as the Valkyrie, and took place the night before Yule began. It is mainly related to the wild hunt, and therefore the Christmas legends relating to that.

The Wild Hunt – This was a legend about ghostly or godly hunters, usually men but sometimes women, who rode on ghostly mounts in the winter sky with wolves and birds of prey. Sometimes people claimed to see them, in which case they were a herald of bad luck, bad weather or impending war. Christmas derivatives of the wild hunt include Santa Claus and his “evil” counterpart Krampus. Sometimes the leader of the wild hunt rode in a chariot drawn by ghostly reindeer. 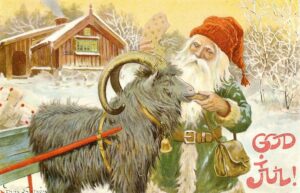 The Yule goat – We don’t see this one so much here, but in Scandinavia yule goats, made of straw, are commonly used in decoration and ritual.

The Yule log – This was related to rituals of staying awake and burning a large log all night on the solstice to ensure the sun would return. The modern equivalent is merely a chocolate cake, but it also might be related to the Christmas pudding in Britain, which is soaked in brandy and served in flames. But the burning of fires generally is reflected in the lights on everything, and candles burning all night in the window.

The Yule boar – This is related to the eating of ham at Christmas, which predates eating turkey, goose, or game birds by almost a millennium.

You can find much more information about all these facets of Yule and more in Wikipedia. Or perhaps a visit to the American Swedish Institute, or Ingebretsen’s, or the public library will turn up some books on Norse culture of old and the celebrations of Yule.