Trip to Africa is life-changing 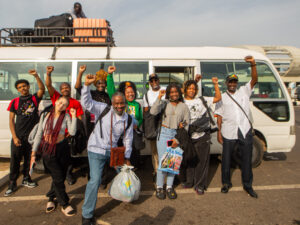 Steve Floyd (not related to George Floyd) has been taking Black youth from South Minneapolis on trips to Africa since the early ’90s. Floyd feels that traveling to Africa is one thing that really works to help them heal from the effects of slavery throughout their history. He finds that the groups “return with a renewed sense of their own possibilities.” In November of 2022 he led another group, but this time adults went too—five adults, one young adult and three teenagers, all of whom live around 38th and Chicago.
The trip was organized in collaboration with Elder Atum and the Cultural Wellness Center, whose People’s Theory of Sickness states that “individualism, loss of culture, and loss of community is what makes people sick.” Before leaving, the travelers met for two preparation sessions, in which they were encouraged to remember that they would be visiting someone else’s culture and would not be in charge. They were cautioned not to see people in other countries as their servants, as many people from the U.S. tend to do.
The 15-day trip was to Senegal and The Gambia, two West African countries located on the Atlantic coast. The many Senegalese friends Floyd has made over the years were waiting to greet the visitors. (There will be another journey in March, much to the joy of three people whose passports didn’t arrive in time for the November trip.)
Floyd’s main goal in taking kids traveling is for them to “see something different.” All they know is a four- to eight-block area in Minneapolis. The trips open up the world to them. Traveling to another country “is like getting a college degree,” Floyd says. Also, a trip to another country “allows them to have an identity as an American, something they can’t do here.” It’s like in North America they don’t count as Americans, but outside the U.S. they do.
Floyd first traveled outside the U.S. through his college basketball connections. As a young man, he went to Holland and Germany, which he said was “so much bigger than what I had. It was so mind boggling how much I could learn about other people.”
Since then Floyd has traveled extensively. In whatever country he finds himself, he builds relationships and now has friends all over the world that he keeps up with through texting and Facebook.
As Floyd expected, his group of November travelers immersed themselves in relationship-building, and all of them have come home with new friends across the ocean. 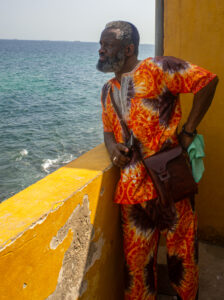 For everyone on the trip, a major purpose was to see places important to their identity and their history, such as the Slave House and the Door of No Return, the place where kidnapped Africans were forced to step onto ships that took them to the new world. Another was Jufurre, the village where Kunta Kinte came from, the ancestor character in Alex Haley’s book “Roots” (made into a TV series that Floyd counts as a major grounding in his life). Before the creator of “Roots” died, in 1992, he did a lot to support Jufurre, but since then, the groups from Minneapolis have adopted the village and always take supplies whenever they go.
One of the teenagers on the trip, Floyd’s daughter Alyana, described many emotional moments. Seeing the Slave House and the Door of No Return on Goree Island made her “happy to know we don’t have to go through that no more.” At the Renaissance Statue she pondered the stories and realistic sculptures of people who were enslaved, noting with sadness how confused and deprived of education they had been. In the jungle she said she felt so much joy to see animals where they belonged, in the wild. She was angry to see European visitors on vacation, but a Senegalese guard at a tourist place told her, “You don’t forget, but you can forgive” and “We like people to visit us,” claiming his place as a host in his country, emphasizing that his country doesn’t belong to Europe.
Steve Floyd explained the pain that still runs through African culture wherever their ancestors had been captured and sold into slavery. It’s like a reunion when their descendants come to visit.
The descendants participated in a naming ceremony of the Wolof ethnic group, in which the visitors each got an African name from a Wolof person. Dancing was part of the event and Alyana said she appreciated the way she felt free to dance even though she didn’t know how very well. People were so accepting, she said. “I didn’t think there was a place where you could go and feel good about yourself and want to be nice to everyone. [In Senegal] everybody will help you, support you and care about you,” Alyana said.
There were so many positive things in the culture, not the least of which was personal safety. In Senegal, Steve Floyd said, “Most people spend a lifetime never hearing a gunshot.” In general, the society is very peaceful, whether in urban or rural areas. There is a high value for “socialization, relationships and negotiation … Everybody eats. There is no fighting … It is typical for Christians and Muslims to live in the same village.” Floyd noticed that people could be in need but still be content—because they have their dignity.
Alyana noticed that if an argument seemed about to start, the other person would just back off. She was impressed that the police and security officers carry bats but not guns. She was also impressed that small children could be out at night playing by themselves without their parents. She felt a sense of freedom that she doesn’t feel in North America.
It was a big pleasure for Steve Floyd to see his group smile a lot. “I see people change before my eyes.” The mother of one of the teens, Theo, says that since he’s been back, “he has changed. He helps around the house and is not fighting.”