The divide between urban and rural

Many consider the oft-quoted p 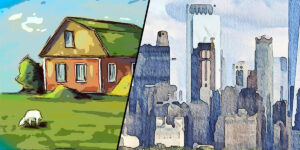 hrase by Abraham Lincoln, “A house divided against itself cannot stand,” as almost cliché. But in reality, it may contain nearly as much relevance and be as applicable today as in Lincoln’s time. Taking into account the social upheaval and political events in just the last several years alone, one detects shades of a societal climate that existed in the late 1850s and later during Reconstruction. The racially charged discourses of the abolitionists versus their Southern counterparts and later Jim Crow are reflected in today’s actions and reactions regarding the Black Lives Matter movement and the passage of laws in several states to restrict voter access to the polls, as just a couple of examples. But while pundits and other media usually comment on issues involving race, women’s rights or gender identity, there is one demographic that is often overlooked, that is, until the most recent presidential election. We are talking about rural America, a segment of the political and societal map whose attitudes and shifts in political leanings can have far-reaching implications nationally.
There is a long history, of course, of rural dwellers being written off with the help of stereotypes as being rubes, rustic, ignorant, unsophisticated and isolated. But with the development of better schools in rural areas and the proliferation of public media, rural citizens have become much more connected and savvier than they were, say, 70 years ago. Yet there still remains a wide gulf between what I define as City Culture and Rural Culture. It consists of differences in values, attitudes, lifestyle and worldviews. As someone who spent 12 years in the Twin Cities and then the past 25 years in rural Wisconsin can attest, these differences can be quite pronounced.
As an example, when I first emigrated from what John Hartford referred to as the “land of tall buildings” to western Wisconsin to edit a few small-town newspapers, I wore a jacket and tie to work. In Minneapolis I was an associate editor at this newspaper and an ad sales representative. The jacket and tie were the uniform of my profession. I soon learned that out here in God’s country, the only people who wore a jacket and tie were lawyers and car salesmen, not to be trusted. Not to alienate my readership, I quickly ditched the tie.
But the jacket-and-tie example serves mainly as a metaphor for a wider rift between City Culture and Rural Culture. While I am generalizing here, Rural Culture tends to possess a healthy distrust of government, while City Culture tends to feel more empowered and engages more in politics. Rural Culture is certainly more parochial and xenophobic in general, while City Culture tends toward a cosmopolitan world view. Rural Culture is more engaged with the land and its environmental surroundings, while City Culture makes decisions on environmental policy from its ivory towers whether those decisions make sense or not. (This is one complaint I hear constantly from hunters and fishermen.) It is the down-to-earth folks versus the people who live in their intellectual bubble.
But these differences are not innate, nor are they universal. It is not a deep gorge that separates the two cultures but more like a soft sloping valley. Still, many of the values and attitudes that are prevalent in Rural Culture derive from both historical factors and present circumstances. There is an underlying current of frustration and fear that is as much economic as political. Insurance companies and other large corporations buy up the farmland and create “megafarms,” pushing out the family farmer. Retail giants like Dollar General and Kwik Trip and Walmart shut down existing small businesses, while fast food corporations like A&W and McDonald’s spring up to replace mom and pop cafes. People who once had economic freedom are forced to work long hours at low wages to support their families. It is like living in economic jail. While City Culture has some parallel problems, (and some which Rural Culture is happy to avoid), there is certainly more economic opportunity in urban areas.
How is Rural Culture facing these fears, frustrations and anxieties? For one, there has been a huge political shift. Once a bastion of Democratic political leanings, in the last presidential election they threw their support at then-President Donald Trump. Emboldened by the demagoguery of the former president, they found a voice to their frustrations where previously they felt marginalized, disenfranchised and left behind by the American dream. Lest the Democratic party make the fateful mistake of losing this large bloc of American voters forever, they had best find a way to speak to these independent-minded citizens and address their particular issues and concerns.

John Rykhus, Jr., is the former news editor of the Morris (Minnesota) Weekly, a frequent contributor to the Morris Tribune, a former associate editor at Southside Pride, and the past editor of the Cornell and Lake Holcombe Courier and the Cadott Sentinel newspapers in western Wisconsin. He can be contacted at [email protected]