CONFESSIONS OF AN UNREPENTANT MAOIST: Experimental College, 1971 to 1973 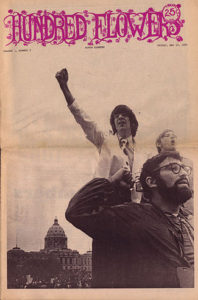 Just when I had given up any hope of ever being hired again as an academic, David Tilsen, a comrade on the left and a former member of the DuBois Club, told me about Experimental College. It was a college at the University where the students were hiring the faculty. They had only funds to hire a faculty member one-quarter time. It sounded great. I applied, and they hired me.

Quarter time meant that faculty were only supposed to teach one class, but I was so excited by the concept of a student-run college that I taught classes in current political developments in China—from the end of World War II to the Cultural Revolution; racist and sexist stereotypes in elementary texts in the Minneapolis Public Schools—where we compiled a 100-page book and presented it to the School Board; and documentary filmmaking—where we made a 30-minute documentary film about the college.

There was a march on Honeywell that fall, organized by the Honeywell Project to protest the manufacture of anti-personnel bombs—little softball-sized bombs that come apart on contact with the earth and send out tiny pieces of shrapnel meant to cut through skin. These are genuinely terrorist bombs. They cannot harm buildings or military installations. They are not effective against armed troops that are generally well protected with heavy uniforms and helmets, but they are deadly cutting through the flesh and vital organs of women and young children. Honeywell had just recently improved its razor coiled shrapnel by changing from metal to plastic. This made it much more difficult for Vietnamese doctors to find and extract the pieces. Vietnamese doctors commented to Western observers on how very clever Honeywell was. Cruel, but clever.

The University administration was planning a serious reallocation and retrenchment campaign to cut back on part-time faculty and eliminate the Humanities Department (long seen as a hotbed of leftist agitation) and at the same time the president of the University was having his dogs flown on his private plane to be with him on vacation because he missed them. Some part-time and full-time faculty members started to organize resistance with leaflets and op-ed pieces in the Minnesota Daily. We were causing a ruckus at Faculty Senate meetings. Then Nixon started carpet bombing Hanoi and Haiphong.

In the early days of May in 1972 campuses across the country erupted in protests and demonstrations. University of Minnesota student protests began in front of the Army recruiting station in Dinkytown. Hundreds of us sat down in the street. The Minneapolis Police Tactical Squad arrived in buses and cleared Fourth Street. We retreated to the front of the National Guard Armory on University Avenue. We tore the iron gates off the front of the building and built a barricade. A friendly fraternity donated an abandoned car. We turned it over. The Tac Squad marched down and eventually cleared the street. We retreated to Washington Avenue and the front of the student union and built another barricade.

The Tac Squad came and asked if we wanted to be arrested. We said, “No.” They said they would come and arrest us. We said we would retreat and build a barricade somewhere else. They gave up. We held the street for three days until the Trotskyists led the demonstrators on a peace march to the State Capitol. While we were marching, the police came and cleared the area.

For a more complete summary of those events, read “TAKE THE STREETS!”—my account, available at Mayday Bookstore, and check out the documentary film of Experimental College that we made, https://www.youtube.com/watch?v=0u2FXF5ez7s. It contains some footage of the early stages of the demonstrations. Unfortunately, I ran out of film early.