A conversation about poverty

Editor’s note: An article by Joe Selvaggio, founder of Project for Pride in Living and MicroGrants, was published in the Nov. Nokomis and Dec. Phillips/Powderhorn and Riverside editions suggesting ways to solve the problem of poverty in Minnesota.  Elaine Klaassen, managing editor of Southside Pride, responded to the article in all the editions of December. Here is the second round of their exchange.

JOE SELVAGGIO writes: I’m trying to avoid the Dualism Trap of current thinking, where the statement of one view is seen as an opposition to another. Differing views can be simultaneously correct.

I tend to divide “the poor” into two groups (even though I know it’s a continuum): those of high untapped potential to work, and those in more desperate straits because of disabilities (intellectual, emotional and physical) who cannot “earn their way out of poverty.”  The second poor should be given all they need, but the first poor should be empowered by education, job training and “opportunity grants,” lest they think of themselves as “powerless victims” and hurt themselves more.

I am generally writing for “compassionate conservatives” showing that I do appreciate the point that “work creates wealth” and we need all the work and wealth we can muster to help get people out of poverty.  We are actually treating the poor with dignity and respect by recognizing their ability to work and create wealth. I think capitalism is designed to create wealth by tapping into our acquisitiveness or even greed. It does a good job of creating wealth, but must be balanced by socialism, which will redistribute the wealth to those who cannot compete—and that is almost everyone to some extent.  However, even as we redistribute wealth we can often have the receiver take some degree of responsibility. And further, we must provide support in a way that has financial independence as a goal.

Elaine says, “There are many things built into the system that make it almost impossible for the ‘have nots’ to earn their way out of poverty.”  True, but there are also many things in the system that link the 125,000 local job openings with the 125,000 poor job seekers.  Programs at PPL, MicroGrants, Summit Academy OIC, American Indian OIC, Twin Cities Rise, and scores more. Connecting seekers to opportunities is the optimistic and honorable solution.
In addition, many government assistance programs help, and should not be cut, but probably increased. I believe that countries and communities that have a healthy capitalism and healthy socialism are the ones that flourish the most. In fact, virtually any form of government has healthy alternatives and unhealthy alternatives. Some, like capitalism, simply weigh more heavily on the former. But any system can be rendered dysfunctional if we err toward extremes.

Regarding that those poor who cannot afford to have so many babies should not have them, I stand by that statement 100%.  In Niger, Africa, I’m told that each woman has 7.6 children, yet there’s a very weak economy.  The United Nations must send pampers and formula.  Is that sustainable or reasonable?  In South Africa, I saw wonderful billboards urging young couples to use birth control until they can afford to raise the children they beget.  I prefer the South African way. Warning a person or a community about the dangers of a course of action, which we wisely choose to avoid, is not pandering, it is considering others as equals.

I support those programs that move people beyond dependency, as long as they don’t inhibit individual initiative.
We all do best, when more of us, who can, are offered the opportunity to do for ourselves.

We must all be encouraged to work to the extent we can, but there must be equal opportunity for the dignity of work.  That’s what will produce the wealth in the first place.

ELAINE KLAASSEN writes: I don’t exactly believe in “helping” “the poor.” I believe a just system would remove impossible impediments from people struggling to survive. When people feel like everything is stacked against them, they often shirk personal responsibility. They give up before they start. I think we have a justice problem.

In regard to “people struggling t 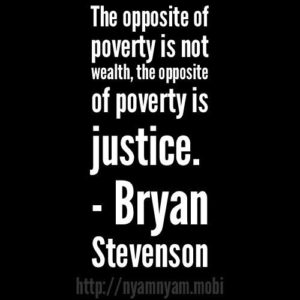 o survive” (I would rather use this term than “the poor”): First of all, I am absolutely not opposed to people having the opportunity to take care of themselves. If going to work would make that possible I would be all for it. I am not opposed to work. I think where we are at in 2017-2018, going to work often doesn’t cut it. Especially when there are so many punishments and impediments, and, as many people have pointed out, the cost of living has doubled but wages have not.

What I hate to see in our culture and our economy is people scrambling and scraping and struggling to barely hang on by their fingernails even though they are working hard enough to earn the approval of any dyed-in-the-wool capitalist. We have some huge systemic problems.

So, what I have analyzed about all this is that you and I are working within different frameworks. We both want people to have what they need to survive and a sense of well-being and dignity. However, you are a realist and I am perhaps more of an idealist, vaguely counter-cultural.

I think you accept American culture and American values, or at least tolerate them enough, to work within their structures. We do have a gigantic rat race going on. Maybe that is the only option here, to join the rat race, jump into the fight, gain approval from the capitalists.

My ideal is a world where life in general is more humane and where there are natural ways to gain what one needs to survive, not so money-based.

In our culture people live very separately from one another. Homelessness is often the result of no family support. The extended family doesn’t see itself as a support network. Or, especially in the case of African Americans there isn’t the generational wealth that there ought to be (because it’s been taken away in ways such as redlining, creating the perception of criminality, mass incarceration, racism), which would make the owning of property and college education a given.

The difference between Native American culture and the dominant white culture is almost 100%, and the understandable Native resistance to assimilation is bound to produce poverty. Also, the Dakota tribe’s land was all stolen, which has contributed greatly to poverty. Twelve million acres of land in Minnesota are not privately owned and could easily be returned to the Dakota as a small act of reparative justice.

There are some financial institutions that will bend and make it possible for people not to go under, but generally they want to make money first and foremost. A person can do everything right and still get zapped. Organizations like PPL, and sometimes government assistance, I believe, support people in navigating a hostile minefield.

As long as our culture is not humane, we will have no universal health care (poverty and poor health are a vicious circle), and since our laws do not curtail actions that take advantage of vulnerable people we will continue to have predatory lending, we will have ludicrous interest rates on student loans, young people will be “sold” college as a necessity, young people will be lured into credit card debt, we will have payday loans, we will have people walking on tightropes living at high levels of stress (very unhealthy) waiting for that one slip that will take them into the final downward spiral.

I’m not opposed to personal responsibility but I’m kind of opposed to the rampant individualism of our culture, which gives us hundreds of people without family or friend support networks.

Every individual from the moment of birth has the instinct to survive and will pursue survival naturally within the scope of what’s possible. Sometimes their will is broken into bits, and hopelessness remains. I’m not opposed to the idea of government assistance. I recognize that charity can be necessary sometimes—although I believe when society works right, charity isn’t necessary. (I just noticed that a Star Tribune headline on Dec. 23 was “Charities brace for tax plan’s fallout.”)