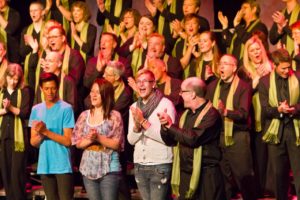 Anti-Islamic, anti-refugee and anti-immigrant sentiment is out of control. Massive deportations and ICE raids continue. The federal government is planning to build a new immigrant detention center in Minnesota. Against this backdrop, the One Voice Mixed Chorus, Minnesota’s lesbian, gay, bisexual, transgender and allies chorus, has created “Sanctuary,” a concert honoring immigrants to Minnesota. The concert will be performed three times in January. The free one is at 7:30 p.m. on Saturday, Jan. 13, at Faith Mennonite Church, 2720, E. 22nd St. The other two will be at the Ordway Concert Hall in downtown St. Paul on Friday and Sunday, Jan. 19 (7:30 p.m.) and 21 (3:30 p.m.). For Ordway tickets call 651-298-1954 or visit www.onevoicemn.org.

Many unique choral pieces, including “Alhamdullilah” in French and Arabic; a Swedish folk dance, “Domaredansen”; “Reunion,” with Hmong text by Central High School graduates William Brueggemann and Chue Thew Yang; and Somalia’s former national anthem, “Soomaaliyeey Toosoo,” permeate the program. The concert includes Ojibwe music too, with a beautiful water blessing. Several contemporary songs describe the experience of LGBT people struggling for a place of belonging and finding home through both biological and chosen family, including “I Come From Good People” and “You Will Be Found” from Broadway’s “Dear Evan Hansen.”

One Voice Chorus has also partnered with Green Card Voices, which has collected stories of youth immigrants. Queer youth storytellers will be featured in the Sanctuary concert, and Green Card Voices photos and stories will be displayed at the Ordway lobby. According to Jane Ramseyer Miller, artistic director of the One Voice Mixed Chorus, “These young people have a resilience that is remarkable. Not only have they traversed a cultural divide in coming to North America, but they have also navigated coming out within their own families.”

The concert will encourage audience members to talk in your community about these issues, speak out against hate, and take at least one action in support of our recent immigrant neighbors in Minnesota.