Temple Israel on Hennepin gives its best for 140 years 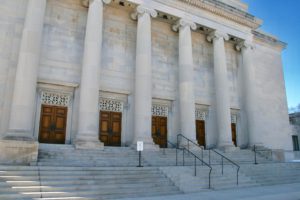 Everyone in Minneapolis recognizes the large, elegant neoclassical building facing Hennepin Avenue near 23rd Street. Temple Israel, housing Minnesota’s oldest Jewish community and the state’s largest Jewish congregation, is more than an architectural landmark. It is a cultural and religious one as well.

Rabbi Marcia Zimmerman leads the congregation of 5,000 to 6,000 members, more than 2,100 families. She was the first female head rabbi of a large congregation in the United States, stepping into the lead rabbi role in 1988.

When it was first founded, in 1878, the synagogue was the gathering place for only 200 members—immigrant German Jews, Orthodox, mostly prosperous and Americanized, looking for a place for Jewish worship. Its original name was Shaarai Tov—in Hebrew, the Gates of Goodness.

The congregation’s first building (1880), small and made of wood, was downtown, but within eight years, membership had expanded and a wooden Moorish Revival-style synagogue was erected a few blocks away. When fire destroyed that building in 1902, it was replaced with a stone synagogue at the same location. The year before, members of the congregation had hired Rabbi Samuel Deinard, who began welcoming the new Yiddish-speaking Eastern European immigrants from North Minneapolis. The congregation moved to its current location in 1914, and in 1920, officially joined the Reform movement and changed its name to Temple Israel.

(The Reform movement shortened rituals, made optional such obligations as keeping kosher, and translated community prayers into the American vernacular. Other Jewish branches include the stricter Orthodox and Conservative traditions and the more liberal Reconstructionist.)

From early on, the synagogue has been a place where speakers from various religions and from the media and the political world have been featured, as part of events open to the public. Some were exotic for their time. For example, Rabbi Deinard invited Baha’i leader Abdu’l-Baha to the temple to speak.

Rabbi Deinard died unexpectedly in 1921, on Yom Kipper, the holiest day of the Jewish calendar. He was only 48 years old. The death was a shock to the young congregation, forcing them to go on a national search for a new rabbi.

They chose newly-minted Rabbi Albert Minda, who came with innovative ideas for the synagogue. By the fall of 1928, a new Art Deco sanctuary, a design collaboration by architect Jack Liebenberg and Minda, was opened.

The building has a number of symbolic artistic elements. The large, dramatic doors facing Hennepin represent the five books of the Torah, and the 12 columns in the sanctuary represent the 12 Tribes of Israel. The sanctuary is simple but stunning, with an expansive oval ceiling, Greco-Roman symbols and a Mesopotamian Tree of Life, a vital Jewish symbol.

The location itself, on Hennepin Avenue, was in itself a statement. At the time, until the 1950s and the tenure of Mayor Hubert Humphrey, Minneapolis was considered the most anti-Semitic city in the country, with Jews barred from neighborhoods, social groups and jobs. The synagogue in the center of South Minneapolis said to all, “We’re here to stay.”

Despite anti-Semitism, or because of it, Minda reached out to the greater community, joining with clergy of other religions. He helped found the Minneapolis Urban League and the Minneapolis Round Table of Christians and Jews. He was also deeply involved in creating the Minneapolis Jewish Federation, a nonprofit organization offering services to Jews locally and in Israel. He was the rabbi for 41 years until he retired in 1963.

During Minda’s tenure, the congregation had grown, by the late 1950s, from 384 families to nearly a thousand. When Minda retired, his successor, Rabbi Max Shapiro, reintroduced some traditional rituals that the Reform synagogue had discarded and continued the social justice focus until his retirement in 1985.
The importance of Temple Israel to the Jewish community and to the greater Minnesota community became apparent in 1990, at the end of a hard-fought political campaign between two members of the Minnesota Jewish community, Senator Rudy Boschwitz and soon-to-be-elected senator Paul Wellstone. The Boschwitz campaign sent out a letter to members of the Jewish community saying that Boschwitz was a better Jew than Wellstone.

The public reaction was immediate, negative and national, and many believe that the letter was instrumental in getting Wellstone elected. And, for members of the Jewish community, it was a “shanda,’” an embarrassment. There were deep feelings of hurt, and many looked to Temple Israel for a response. 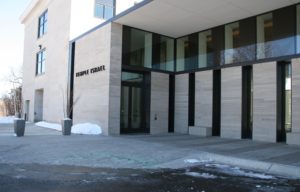 At services the following Friday, the temple’s cantor, Rabbi Stephen Pinsky, stood at the pulpit to both denounce the letter and to send a message of healing. The letter, he said, implies that the Jewish community is a one-issue community. He invited Wellstone, who attended with his family. Although a member of the congregation, Boschwitz did not appear.

Rabbis at Temple Israel were also involved from early on with issues of social injustice. Rabbi Max Shapiro, who died in 2009, continued the synagogue’s outreach to other faiths, engaging them to join with him to fight anti-Semitism, racism and poverty.

With other religious leaders, he helped found the Minnesota Council of Religion and Race. He also represented Minnesota at the funeral of Martin Luther King Jr. and witnessed the signing of the Israel-Egyptian Peace Treaty, in 1979. In 1985, he was instrumental in creating the Center for Jewish-Christian Learning at the University of St. Thomas.

Shapiro also encouraged members of the congregation to become involved in social action. In a 1964 sermon he told them, “It is not enough for us to applaud or even support civil rights legislation. Judaism instructs us to do more. It tells us to take the needy into our employ … It is a religious duty … For no community, no city, no nation can long endure so divided—half affluent, half despairing.”

The synagogue continued to grow and change. In 1987, a modern addition to the synagogue, designed by architects Bens, Thompson and Reitow, replaced the outdated 1955 addition. It was an ambitious undertaking, creating an additional entrance with a large lobby, an area where lunches and dinners are served, giving people easy access to the sanctuary and the education wing.

The new addition allowed students in the Early Childhood center to stay on the ground floor with the 600-strong youth religious education program taking up the second floor.

This year, the synagogue joined with other Minneapolis religious organizations to raise money for rental assistance, when it became clear that many homeless individuals were being displaced by Super Bowl fans and related events. The money raised went to making sure that the displaced had adequate food and shelter.

Those helped included one woman who had just lost her mother. “She could either pay for her mother’s funeral or pay the rent. Money we raised allowed her to stay in her home,” Rabbi Zimmerman said.

“We have made a very intentional decision to stay in the city,” she said. “Many synagogues have moved to the suburbs. But the health of our synagogue is dependent on the health of the city.”

Last Thanksgiving, members of the congregation distributed 500 traditional Thanksgiving meals, and during the Christmas season, the synagogue opened its doors for two weeks to the homeless, providing beds and communal meals. “We understand that Christian churches are tapped out during that time of year, so we fill in the gap.”

Under Rabbi Zimmerman, much like under Rabbi Deinard, the synagogue has also continued with the tradition of playing host to a variety of speechmakers, including Sam Donaldson, Elie Wiesel, Maya Angelou, Lily Tomlin and Thomas Friedman.

“We continue to grow, God willing,” she said. “To get new members we are always creating new programs, making sure we don’t tell people they have to be a certain way. We will be there when a baby is born, when a child becomes an adult, when people come together and when someone dies,” she said.

“We will be there when people need us,” she said, “letting Judaism become a container for their needs and emotions during those times.”