RESISTANCE PERSISTENCE: The Revolution is headed your way 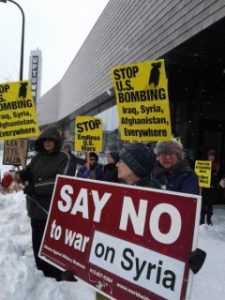 Some of us were deterred on April 15 from attending the Anti-War Rally by the crazy blizzard that hit us on the 14th and lasted three or more days. But not everyone! Our Twin Cities Democratic Socialists of America comrade Andy Guthrie was there and filed this report:

“On Sunday, April 15, 70 members of a broad coalition of the Twin Cities Left braved cold, wind and record breaking snowfall to denounce airstrikes on Syria and call for a halt to all wars. Among them were eight members of the Twin Cities Democratic Socialists of America, including me. Personally, I was there due to my unequivocal opposition to any U.S. military intervention in Syria, as well as rejection of the tendency in parts of the American Left to wink at the crimes of the Assad regime and other imperial powers in a simplistic understanding of ‘resistance’ to American imperialism. Though I cannot speak directly for my comrades, I have heard these sentiments echoed in numerous conversations. Among the several speakers, most inspiring was a member of Veterans for Peace, a man who in younger years risked his life (he thought) in a just and lawful defense of his country. The scales have since fallen from his eyes. As for justice, he demanded it in the form of peace. As for law, he demanded American war criminals in high places be subject to it—leading a DSA comrade to start a chant of ‘Send them to the Hague!’. We are grateful to the Anti-War Committee for organizing the rally and to our DSA comrades for turning out. We did not stop the bombing, but saying ‘No!’ matters. Showing decent people to whom it has never occurred that taking to the streets is an option matters. Standing up for Syrians as people, not geopolitical pawns, matters.

“Earlier in the month (April 4), we participated in a very inspiring rally at the Saint Paul Labor Center in support of two classes of unrepresented workers at Delta Airlines—flight attendants and ramp workers, including the highly exploited so-called ‘ready reserve.’ There was a huge crowd in the small but standing-room-only hall, including Delta workers, members of the International Association of Machinists (which is currently running a card campaign at Delta), other union activists, elected officials, and other supporters, including about a dozen from TC DSA. MN Nurses Association organizer Rose Roach, CD4 Congressional Representative Betty McCollum, and ramp worker Joe Evica were among the many inspiring speakers. Evica, 25, from Madison, Wis., referred to how Delta CEO Ed Bastian likes to refer to employees as members of an extended family. ‘What kind of family thinks it’s OK to pay some of our employees $20,000 a year while our CEO makes over $12 million?’ asked Evica. He is a ‘ready reserve’ worker, meaning he works alongside full-time employees whose pay starts at twice his wages and who receive health, vacation and retirement benefits that he doesn’t get. ‘If this is a family,’ he added, to wild applause, ‘it’s the most dysfunctional family I’ve ever been a part of.’ ”

Your Resistance Persistence columnist saw a couple of powerful movies in two very different venues that we would like to share. On April 13, the group Transition Longfellow screened “Growthbusters” along with a visit from and talk by the filmmaker and founder of the Growthbusters organization, Dave Gardner. This is one of the most inspiring films I have seen in a while. You can find out more, including buying the DVD for as little as $19.99 at growthbusters.org. Then on the next Friday, the 20th, we saw “Mr. Gay Syria,” screened at the Uptown as part of the MSP International Film Festival. This is an excellent documentary to counter the mainstream media view of Syrians as consisting entirely of either crazed fundamentalists or sheeplike victims of Assad. An unflinching yet nuanced view of the lives of gay, lesbian and transgender people in the turbulent and complex Middle East is rare, but in this film it’s there and beautifully presented.

There were lots of other activities in April, but I’m running out of space, so just two more. On Monday, April 23, I first heard of a faith-based statewide group in the struggle for immigration justice, Asamblea de Derechos Civiles, based in St. Cloud and allied with Minneapolis’ First Universalist Church. On that day, they had begun a campaign that included one member, Antonia Alvarez, starting a 14-day fast. With a rented tour bus, they marched, walked and rode, going from a church in Brooklyn Center to the Capitol in Saint Paul, demonstrating at three other city halls along the way. We joined the march as it neared the Capitol, at Hamline Avenue and University, about 5 o’clock in the afternoon, and proceeded with them to a Ways and Means meeting in the Senate building. Antonia remained at the Capitol, in a makeshift camp under the Leif Eriksson statue, for the rest of the fast, which ended Sunday, May 6. ADDC-MN’s demands are for a Dream Act for families, safe affordable housing, and driver’s licenses, and against family separations and mass incarceration of immigrants.

And finally, on Saturday, April 28, Twin Cities DSA kicked off what will be a summer-long campaign of canvassing for Health Justice Now. Launched from Sabathani Community Center, about 20 canvassers covered a small turf in the Central and Bryant neighborhoods, explaining to people what our vision for health justice encompasses—an improved Medicare program with better coverage, no deductibles or co-pays, and affordable, understandable drug coverage. Ultimately, we see this better Medicare expanded to cover everyone in the U.S., from the day of their birth, regardless of economic condition or citizenship status. It will include mental health and addiction recovery, dental and vision, as well as long-term care, all of which are currently excluded by Medicare. We see state universal healthcare plans as a possible stepping stone to this program, but not an end goal.

On Tuesday, May 8, East Side Freedom Library and Twin Cities Democratic Socialists of America’s Socialist Feminists Branch co-hosted a Mother’s Day Fundraiser for Incarcerated Mothers at the ESF Library, with music, an auction of craft items, homemade baked treats for sale, a seltzer bar with floral infused drinks, and a chance to write letters to incarcerated women and donate books for prison libraries.

The DFL Minneapolis City Convention was held Saturday, May 12. School Board endorsements were on the agenda.

Next Saturday, May 19, will be the bi-monthly membership meeting of Twin Cities DSA. Endorsement of member Doug Mann for Minneapolis School Board At-large will be on that agenda. Mann is not seeking DFL endorsement, but is running as a member of the Green Party.