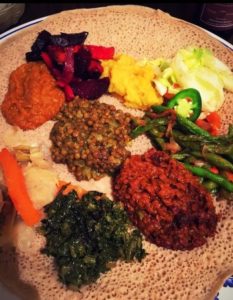 The Dish continues our pursuit of international lunch options with a visit to Dilla’s Ethiopian on Riverside Avenue. We’re attracted by the restaurant’s terrific reputation and the reasonably-priced vegetarian lunch buffet. I was accompanied by Mary, who is an aficionado of Ethiopian food, both as a cook and a diner-out.

The Twin Cities with its wealth of immigrants both recent and long-standing from many African countries is also blessed with a slightly higher than average number of African specialty restaurants. By far the most popular with the general population (i.e., non-Africans) are the Ethiopian restaurants.

Of all the African countries, Ethiopia has the longest non-colonial national history and so has had more of a chance to develop its unique culture, including cuisine. (Fascist Italy tried to colonize it in 1935, but was kicked out in 1941, leaving not much to the cuisine except spaghetti in an aggressively spiced meat sauce.) It is also a landlocked country (except for periods of time when Eritrea, with its Red Sea coast, was part of Ethiopia), so it has fewer west Asian and European food influences than other African nations. But on the other hand, in itself, Ethiopia is not a homogeneous nation. With the Oromo, Amhara, Tigrigna and other ethnic groups, each with their own cuisines, it represents a rich amalgam. And, there is a significant minority of Somali Ethiopians.

The country is largely involved in either farming or pasturing animals such as cattle and sheep. So this influences the vegetables used, and the meats. Pork is unknown there. Most of the traditional meat dishes seem to center on chicken, beef or lamb, in roughly that order. Eritrean cuisine includes fish, but usually just finned white fish from the Red Sea. Here and now, tilapia is the usual substitute. Another major influence is religion. About 43% of the population is Ethiopian Orthodox Christian, one of the oldest and most austere branches of Christianity. They have strict fasting rules—vegan food only—every Wednesday and Friday year round, and for 40 days of Lent. Another 40% or so are Muslim, with their own halal dietary requirements.

Those who are already familiar with Ethiopian food can skip this piece, but if not, here are some Ethiopian eating basics. First is injera, the soft, flat bread/pancake that most dishes are served both on and with. Traditionally this was made from teff, a type of grass, but nowadays it might be a combination of grains. The plate, which is much larger than most plates, is draped from edge to edge with a single injera. Another is rolled up on the side of the plate like a napkin. You can get extra in a bread basket. This is both part of the food and a utensil. Using only the right hand, you tear off a small square of injera, wrap it around a mouthful of food, and pop it into your mouth, without touching your fingers to any part of your mouth. (It’s a good idea to wash your hands before the meal, for obvious reasons.) One of my old boyfriends used to call our favorite Ethiopian place “the eat-your-plate restaurant.”

Other useful terms are berbere, which is the quintessential spice mixture of Ethiopia, though it is so popular it has found its way into other cuisines too. Then there is niter kebbeh, which is spiced butter oil. Clarified butter is slow-steeped with a variety of herbs and spices and then bottled to use in wats or wots (stews).

Dilla’s menu includes various categories: the Ethiopian classics—Doro Wat (a spicy chicken stew) and Egg Fir-fir (scrambled eggs with strips of injera) and various Tibs (sauteed meat dishes, with or without vegetables) and many Atkilt Wat, or vegetarian dishes, based on lentils, or green beans, or spinach, or a combination such as cabbage, carrots, and potatoes; dishes either for the very adventurous or the Ethiopian diner longing for a taste of home—Dulet, composed of lamb, lamb tripe and liver or Gored (chunks of raw lean beef marinated in awaze, a fiery chili sauce); the more conventional American tastes—curries, hamburgers, that spicy spaghetti, and cutlets served with a simple lettuce and tomato salad. In the appetizer section, there are of course sambusas, both vegetable and meat. Sambusas are the most well- known pan-African nibble, common to Somalian, Ethiopian and even Kenyan cuisine: triangular fried pastry wraps.

I would recommend going at the less popular times if you’re a car driver, because the parking is limited. The menu prices are good a value.