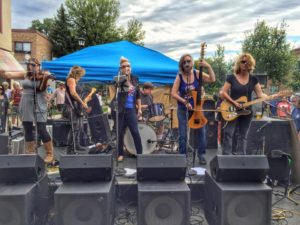 Nicollet Avenue Open Streets event is Sunday, Sept. 23, from 11 a.m. to 5 p.m. The route starts at Lake and Nicollet and extends southward to 46th Street, making it one of the shortest routes. But what it lacks in length, it makes up in intensity, with lots of sports, beer, food, drink, music, families, and arts and crafts, in addition to the usual helpings of walkers, bikers, skaters, strollers and friendly dogs. (Probably this year some of those fancy scooters too, although the motorized ones are not allowed.)

Open Streets has radical roots. It was started over 40 years ago in Bogota, Colombia, by a young Colombian activist. From there the idea spread throughout South and Central America and eventually came to the U.S. In some cities the first Open Streets events, which are called Cyclovia or “cycle-way” in Spanish, were fueled by radical anti-automobile anarchists, and were not sanctioned by the cities where they happened. Now Open Streets as an idea and a movement is gaining general acceptance, especially in cities such as Minneapolis, where there is an existing biking, skating, walking, sustainability-liking community in place. Other U.S. cities that have a similar type of event include Pittsburgh, Pa., Atlanta, Ga., Madison, Wis., San Antonio, Texas, Portland, Ore., and Los Angeles, Calif. Last year in Minneapolis, more than 101,000 people participated in Open Streets events, which included a total of 807 street spaces along the eight 2017 routes. One of the innovations the neighborhood organizations added to Open Streets several years ago, which has now been adopted by other Open Streets because it was so popular, is an Artisan Market. This is open to all but with neighborhood resident artisans getting priority. This year the Artisan Market will be bigger than ever and is located near the corner of Nicollet and 34th Street.

A major attraction, exclusive to the Nicollet Open Streets, is a 5K fun run called Run for Beer, co-sponsored by Minnesota Brewery Running Series along with KFNA. (When I said it was exclusive I only meant that Nicollet is the only Open Streets that has a run for beer. Obviously in the state there are lots of them, since this organization literally does nothing else.) Runners register in advance through the KFNA website. At 11 a.m., check-in begins at Martin Luther King, Jr. Park, followed by warm-ups led by volunteers from the Blaisdell YMCA. The run itself is from 11:20 a.m. to 2 p.m., and the course goes up and down Nicollet until the finish line at (roughly) 5 kilometers is reached. Every finisher gets a beer from their choice of participating breweries, which have beer stalls all along the route. There is also valuable swag, and of course, that irreplaceable sense of personal accomplishment. All proceeds go to support the two neighborhood organizations.

One of the participating merchants along the route, Nicollet Ace Hardware, is upping the attraction for fun-runners to participate in the Run for Beer. If you choose to run on Ace Hardware’s own “team,” you’ll get a reduced registration fee, and additional (free) swag: an Ace Hardware team T-shirt to wear during the run. Contact Nicollet Ace Hardware for more details. Another way to get a free T-shirt, if you’re not a runner, but can offer two to three hours’ work, is to volunteer for the festival. From roving photography to staffing information booths, there are lots of volunteer jobs to be filled. Access the Google form to volunteer via the Facebook page Nicollet Open Streets 2018.

Driftwood Char Bar, at 4414 Nicollet Ave., will have a street stage with four live music acts. At 11, Lolo’s Ghost, at 12:30, the Dan Israel Trio, at 2 p.m., Them Dots Minneapolis, and last, starting at 3:30—this sounds exciting—RuDeGIRL, a Clash tribute band. Driftwood Char Bar is known for its live music most days of the week, and especially its Sunday night show, a Grateful Dead tribute band called Shotgun Ragtime. If you’re not in the Run for Beer, you might want to start your day on Nicollet Avenue with a breakfast (served 11 a.m. to 2 p.m.) at Driftwood Char Bar. (Of course, Hola Arepa, another sponsor on the avenue, also has great brunch food.) Live music in the streets will be all over the place: there is the 5th Annual MNaked at the corner of 38th and Nicollet, sponsored by Five Watt Coffee, Nighthawks and Blackbird, including these artists: Collin Mueller, Jim Stapley, Luke LeBlanc, Michael Gay of Almighty American, Julia Christi Ann, Lacey Guck, and Tucker Jensen of Dirt Train.

And let’s not forget that Kingfield Neighborhood has a really excellent farmers market, right there on Nicollet. Pretty much all open streets have one now. So if you’re going, bring a sturdy cloth carrier bag to take home your farm-fresh produce, as well as any other shopping you may pick up and the odd political leaflet. What other shopping? Well, don’t forget B Squad Vintage shop is on the route. They normally have a sidewalk sale on Open Streets day; last year they had a 15% off everything sale (no word on this year, but check it out). And then there’s the hardware store mentioned above. You might need some additional kitchen gadgetry to preserve or prepare the produce—a canning funnel, or a nice new chef’s knife.

Don’t forget 2018 is a very crucial midterm election year, and Open Streets are an irresistible draw to both candidates and those pushing causes, such as the Minneapolis school referendum. You will always see lots of candidates and their teams, as well as activists, at an Open Streets. Also some teams from whatever level of government registers new voters will be there trying to do exactly that. One non-government group that will be on Nicollet Avenue is the Twin Cities Transit Riders’ Union, advocating for bus, LRT, and Metro Mobility riders. Oh, and speaking of transit, don’t forget to download your free Metro Transit pass for the event. Here’s a quick link to get it: https://bit.ly/2wN2hFj.