It takes a neighborhood to write a book 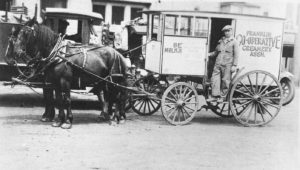 Seward Neighborhood has written an intriguing book about its own history. The project has involved a “cast of thousands,” and took seven years to complete. Its 19 chapters start before the arrival, in 1850, of the first non-Natives who built homes and settled, and end in the 2010s with the newest neighbors, refugees from East Africa. A significant part of the book is focused on politics and activism, a salient feature of this vital segment of South Minneapolis.

The small, attractive tome—320 pages including text, 300 photos, 16 maps and many footnotes—will come out the first week of December. The printer is Nodin Press, a Minneapolis company owned by Norton Stillman, whose grandfather had a chain of grocery stores, including one in Seward.

In Iric Nathanson’s preface to “A People’s History of the Seward Neighborhood” he says, “The development of this book is, itself, an important chapter of recent Seward history.” But that chapter isn’t in the book.

Dick Westby (who has lived in Seward most of his 84 years and is fondly called the “mayor” of Seward), Wendy Epstein, Burt Berlowe and Marilyn Matheny, four volunteer members of the Seward History Committee (SHC), who were among the final six that brought the book to the finish line, told me how the book was made.

Again and again they called the seven-year marathon a “journey of discovery.” They marveled that it’s possible for anyone to live somewhere and not know anything about what has happened there. That’s how they used to be. That’s how most of us are.

The initial seed for the book was planted in the late ’70s.  Money became available through Community Education and people jumped in with all kinds of ideas for neighborhood initiatives, many of which were implemented, such as what became the Seward Concert Band, and of course the history book.

Some budding historians were hired to do research on the Seward neighborhood (which only since 1955 had actually been defined as Seward, named after its central school and given set borders—Interstate 94, the Mississippi, 27th Street and the Hiawatha/Minnehaha rail line). One of the researchers, Norene Roberts, discovered that an important parcel of Seward had once been the site of the state fair, between 1865 and 1883. Nobody knew. They then created the biennial King’s Fair celebration, still going today, which fostered increasing interest in the neighborhood’s past.

At some point, probably in the 1980s, the Seward History Committee (SHC) was formed. Its members collected oral history: They interviewed older Seward residents about their memories, and organized “reminiscence evenings” around specific themes (such as sports, World War II, Seward School, stores, transportation), where everyone in the hood was invited to come share their memories.

In 2011, the SHC got a grant and many local writers were hired to research and write chapters on a host of themes that Westby had outlined. The oral histories, plus old maps, census records, directories, local archives, family histories and newspapers provided the information.

In 2014, Epstein and Matheny looked at the writing that had come in. “Some chapters needed more research and development. Some were still just sketches. It was very uneven.  It was an incomplete collection. We didn’t have a book,” Marilyn said.

The SHC scrambled to find grant money to fund the next phase and hired a journalism professor emeritus newly transplanted from Kansas, Rick Musser, to take on the job of developmental editor in order to make a better product. When his year of paid work was finished he joined up as a volunteer.

In the end Musser said there was enough material for another book, lamenting that certain chapters had to be cut. Berlowe said it was “a little bit of a struggle: Where do we stop? How recently do we stop? History is made every day, every minute.”

When it came to working with the publisher to really put the book together, Musser, Matheny and Epstein were the co-editors, creating the look of it, searching out photographs, double-checking the endnotes, proofreading. Matheny told me sometimes they sent a chapter back and forth 10 times until they were satisfied.

The project has been extraordinary for the sheer tenacity of the volunteers; although various people have been hired along the way, the predominant bulk of the work has been done, unpaid, by enthusiasts, as a labor of love.

Throughout the book, a finely honed social and political consciousness is evident, from the story about the hospital for the “mildly insane,” to the one about the Hub of Hell, to the one about Rev. M. Falk Gjertsen and a divisive scandal in the church, not to mention the deadly labor riots.

Epstein and Berlowe both emphasized that looking at history you see what has changed and what has stayed the same. For example, Berlowe observes that the new wave of immigrants, who were Scandinavian in the past, dominated politics; the latest wave, the Somalis, now dominate. Epstein notes the 50-year intervals between the anti-war socialists of 1918, the anti-war activists during Vietnam in 1968 and our current upheaval.

The official book launch party will take place from 6 to 8 p.m. on Monday, Dec. 10,  at the Co-op Creamery, 2601 E. Franklin Ave. Light snacks will be provided. Beverages can be purchased. Contributors and editors will be there to answer questions and sign books. Books will be available for sale at $25. For more information contact Dick Westby at [email protected]. The re will be a second book release party at Boneshaker Bookstore on Wednesday, Dec. 19.