Down with Boulder Dam, Part two 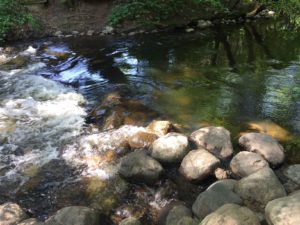 The following is my correspondence with Michael Schroeder, Assistant Superintendent for Planning:

“I have a meeting with MPRB staff next week to look into this further. I understand the boulders were placed to mitigate a head cut in the stream, but I don’t yet know when—perhaps 10 years or more ago. There might have been some displacement since they were originally placed, perhaps through playful creek activities … I’m not sure.

“If there’s a way for us to remove or relocate the boulders without creating an issue for the stream, we’ll look further into how we get that to happen.

“If there is some obstructing quality to the boulders, I understand it might mitigate some of the water elevation fluctuations in Lake Hiawatha. I need to look into that further. In discussions I’ve had so far, the removal of the boulders would have very minimal, if any, influence on the volume of groundwater pumping.”

So, what’s happening? Was staff able to help solve the mystery of Boulder Dam? Do we know why it’s there? As the principal control point (according to Barr Engineering) for the height of Lake Hiawatha, have you calculated how much lower the level of Lake Hiawatha would be with the removal of this obstruction?

Thank you for your serious consideration of this matter,

Then I got this email from Michael Schroeder:

Ed, If you provide a telephone number, I’ll call you at 10 a.m. on Friday. I hope I’ll be able to answer your questions at that time.

A head cut is where a sudden change in the elevation of a creek will cause erosion of the creek bed. The water flows downstream. When it has a sudden drop (like a waterfall) the water flowing over the falls will wash away some of the soil on the creek bed at the top of the waterfall, and erosion will lower the creek bed as the head cut moves upstream. It seems the boulders were placed there to stop the erosion.

They were also placed there to stop the scouring around the supports for the 30th Avenue footbridge. Scouring occurs when supports for a bridge force the current to narrow and speed up and wash away soil at the base of the supports. This can, of course, weaken the supports and ultimately collapse the bridge.

The boulders were placed at the 30th Avenue footbridge for two reasons: to stop the head cut from moving upstream and to strengthen the supports for the bridge.

They clearly must have thought that the most effective way to eliminate the head cut is to build a barrier or dam higher than the level of the creek bed that is starting to wash away. The creek will then pool up at the dam, and the force of the falling water will fall against boulders rather than the soil that could wash away a part of the creek.

But this solution to solving a head cut problem has created two new problems.

First, the sand that is dumped into Minnehaha Creek through storm sewer pipes from 28th Avenue to 37th Avenue stays in the creek and doesn’t wash away.

If the boulders were removed (except for a few to support the bridge), erosion of the creek would continue, and, maybe, by 2099 it might reach Lake Hiawatha and lower the water level by a foot. That doesn’t seem like such a bad thing compared to the present reality where boulder dam has raised the water level in Minnehaha Creek and Lake Hiawatha to 810.7 feet above sea level from the 809.0 necessary to cover the sanitary sewer lines of the City of Minneapolis.

Kathryn Kelly published the following on the SaveHiawatha18 Facebook page:

Over the past year, SaveHiawatha18 has been researching the pumping permit issue for Hiawatha Golf Course. I talked to Scott Pearson, a hydrologist for the DNR, last week (Oct. 24) at the Nokomis Water meeting. We talked about two issues of interest, and I was pleased with what he said.

In our research of this issue in the past year, we received documents from the DNR that indicated this. On Wednesday Mr. Pearson clearly confirmed this to me.

I also talked to Katrina Kessler and asked her about the infrastructure that they installed on 44th Street for the storm sewer water that goes into the golf course. I wanted to know how they handled the trash. She said that she didn’t know what was implemented there, but she did say that the City of Minneapolis can install infrastructure that would collect trash such that they can pump the trash out and mitigate it for any new project that is done. So I take that to mean, if a trash collection system is implemented on the 43rd Street pipe before it enters the golf course, the trash could be eliminated no matter where the water dumped out.