Notification is not enough 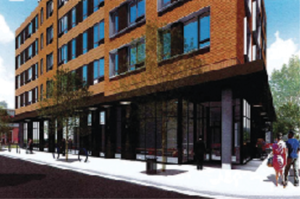 It’s on the way—a mixed-used apartment building with 48 studio apartments and 4,200 square feet of commercial space, at the southeast corner of Lake and Chicago. Los Ocampo, which currently operates in the spot, is also set to remain in the new space according to developer Daniel Oberpriller of North Bay Companies and longtime local property and business owner John Wolf. For over a year, their plans for the development have been evolving; and as of July, they began to come into focus for the Powderhorn Park Neighborhood Association (PPNA).

That’s how it goes. When a developer with an idea, good or bad, has resources to put that idea into a plan, and that plan is nearly ready for various city approvals, that’s when neighborhood associations typically receive a call. And that’s true in this case.

PPNA’s notification of the project led to several meetings between the developer and association representatives and community members. These meetings were of the show-and-tell variety for two reasons. First, conversations were happening after plans were already in ink. Second, PPNA and community members didn’t have viable leverage to influence the direction of the plans.

Viable leverage can mean being brought into the process sooner so community input shapes the plan. It can mean communities like Powderhorn gain access to public and private funds that enable co-equal partnerships with developers. In both instances, an invaluable tool in community-centered development is time, that is, having the time to influence plans, and the time to acquire funding to drive them.

Notification of this project to the neighborhood was not nearly adequate to allow for participation from a position of leverage. It did however give PPNA time to hear from over 50 community members about key concerns or support for the plan.
The glaring theme of opposition to the project is the lack of affordability and the belief it will spur further unaffordable housing developments in a community needing more affordable family-suitable units. This thread from community input was clear, but there were also several voices that see investment at this corner as a good thing.

Community preferences and priorities around this project were shared with the developer on several occasions. But developers had already met the city’s community involvement standard, which is simply to notify the neighborhood association and ward council office. The ordinances that outline this requirement are simple in language but ineffective in their ability for community input to practically impact development plans. This is a problem.

The problem is exacerbated by the lack of resources for neighborhood organizations to not only collect and synthesize general community sentiment about the nature of a project, but to also provide input to the City Planning & Economic Development (CPED) Department that centers on the project’s application requirements.  This is especially problematic since the City Planning Commission, as the authorizing body of projects like these, is currently bound by laws that only consider land use requirements and not community preferences and priorities.

On Nov. 13, a unanimous decision by the City Planning Commission, which aligned with recommendations in a CPED staff report, all but guarantees this project will come to life as the developer intends at the southeast corner of Lake and Chicago. It represents the rule and not the exception of how projects can advance that only somewhat align with community priorities. This can change.

PPNA, in partnership with the bold, vibrant and vocal community it serves, can push for building viable leverage in development. This will involve calling for changes to ordinances that require communities to be engaged earlier in the development process. It will also involve PPNA leading efforts to encourage community members and funders to contribute to a development fund that provides a viable path for the neighborhood to move from receiving notice to giving notice of impending developments.