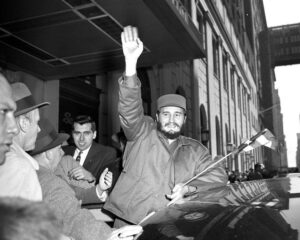 Former Minneapolis Chief of Police Tony Bouza at 92 has written “Confessions of a Police Misfit,” a short autobiography that covers a long life filled with remarkable experiences and observations. Along the way, he has much to say about history, current affairs, his peers, anyone else on the scene, and the arts. He is a chronic chronicler, that is, a recorder of events, and brings his considerable wit (and wits) to bear. He has investigated and recorded major historic cases such as the one involving a missing Spanish spy and the brutal dictator Rafael Trujillo.
From his childhood on the Atlantic coast of northwest Spain (the dictator Francisco Franco’s homeland), to his adolescence as a poverty-stricken immigrant in New York City, to his assignment to BOSSI (Bureau of Special Services and Investigations, NYPD’S surveillance division at that time) to his immersion in the Federal Executive Institute (an intensive transactional analysis, self-awareness seminar), to his run for governor of the state of Minnesota, he keeps asking, “Who am I?” and “What am I supposed to be doing with myself?” He describes a surprising push and pull between his absolute self-confidence in his instinctual ideas and his absolute self-doubt about his place in the world. (The one thing he has no unsettled questions about is his family. He writes about their unity and his unfluctuating, steady dedication to them.) The story is very intimate and personal, while at the same time encompassing vast and unsentimental concerns about the world. He has no illusions about human nature.
This book has come out at a time that couldn’t be more opportune. U.S. policing is under attack, and our whole notion of what we as citizens need from our police force is under construction. As an intellectual, a culture vulture, who weighs questions of criminality and illegality in the light of morality, the common good, aesthetics and history, Bouza presents a picture in which good policing is more interested in the spirit of the law than the letter of it. He’s a liberal arts cop. In the book, he cites someone who didn’t approve of his “sociological approach” to police work. He wrote in the book that he loves cops, but critically. There are many changes he sees as necessary, the main one being an end to racism in departments across the country. Change, across the board, he says, comes out of growth in the inner life.
For all of his spiritual, psychological and intellectual wisdom (and maybe because of it), many decisions he made over the years seemed impressively practical. For example, in the Bronx he initiated tree-planting and river cleanup. As another example, in Minneapolis, random traffic stops described as “driving while Black” ended when he required officers to write reports citing “probable cause” and “articulable grounds” for every traffic stop.
You’d think someone who had spent his entire career within police departments would be more interested in criminality. While the book does delve into crime-stopping, there wasn’t as much about the street as I expected. More than criminals, Bouza writes about the interior intricacies of police departments and the political operation of city government, showcasing the heights and depths of those characters peopling the bureaucracies. Human foibles are mordantly exposed in the story of the African violets. Read the book to find the African violets. It takes the cake. I laughed so hard I almost cried (I’m still laughing).
There are many laugh-aloud moments in the book. Bouza is adept at wrapping it up, whatever it is, in a single sentence. There are some real “zingers” that interpret what just happened. Not all of them are original to him, but they are perfect for the moment, such as, “If you see the light at the end of the tunnel, it’s an oncoming train.”
The book is erudite but not academic; there’s no index. In a way I wish there were, just to be able to find references to people Bouza coincided with: Prince Philip, Khrushchev, Lyndon Johnson, Fidel Castro, JFK, Sukarno, John Glenn, Bob Hope, Rudy Perpich, Mayor Fraser …
If you’ve been dazzled for years, as I have, by the columns Bouza writes for Southside Pride, you will know he has created his own distinctive writing style, which is headsy, sometimes too succinct and therefore cryptic, as well as full of million-dollar words. (He’s a bit sesquipedalian– speaking of which.) The reader might have to look up some words as well as some unfamiliar historical or literary characters.
There is a cast of thousands, from people you’ve never heard of to the rich and famous, plus the cultural/historical references, such as Tomas de Torquemada, Oliver Twist, Machiavelli, Marlene Dietrich in “Blue Angel,” Beethoven’s Ninth Symphony … It’s a lot, and kind of makes your head swim and spin. Another cause of head spinning, at times, is the hairpin-curve chronology of the story. However, I was willing to ride along to enjoy the booming strength of his most unique and honest voice. I would never accuse Bouza of tergiversation. He would always give you a straightforward, honest answer even though you might not know exactly what he means.
Bouza censures the actions of many, he makes fun of many, but he also criticizes his own actions and is gifted at laughing at himself – especially the nine “boring, soporific” books he has written. I wonder how boring they really are.
Bouza’s interest in culture, especially film, and his overarching view of policing led him to participate in various films, mostly after retirement. The latest is a six-part Netflix series called “Who Killed Malcolm X?” in which interviews with Bouza find him denouncing the botched investigation of Malcolm X’s assassination. A CNN headline from February 2020 reads: “The assassination of Malcolm X is being reinvestigated after questions raised in a Netflix series.”
“Confessions of a Police Misfit” is not available in bookstores. Bouza’s son, Dominick, has a bundle of them. He’ll sell you one for $10. Call him at (612) 297-0767.