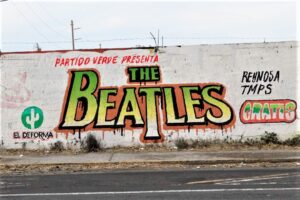 A satirical political poster in the last Mexican election: The Green Party presents a free concert by The Beatles

The June 6 election in Mexico brought mixed results for the party of President Andrés Manuel López Obrador (AMLO). This party, Movimiento de Regeneración Nacional (MORENA), retained its majority in the Congress and won several governorships but lost the majority of districts (alcaldías, boroughs) in its stronghold of Mexico City. The relative defeat of MORENA in the capital city has been attributed to various causes; the crash of Line 12 of the Metro a few weeks earlier was the last straw for some people, including some leftist former allies of AMLO. (The president played a predominant role in the selection and election of the three people who have succeeded him in the mayor’s office and all three are under scrutiny as information flows about the causes of the collapse.) The president himself blamed election losses in Mexico City on propaganda campaigns on the part of the coalition of opposition parties. It is probable that some otherwise progressive people voted for the right-wing Partido de Acción Nacional (PAN). These people downplayed or forgot the party’s roots in the Catholic church and, yes, the neo-Nazi movement of the 1940s and a more recent history of travesties during the presidencies of Vicente Fox and Felipe Calderón. Some may be too young to remember. Or tired of what they see as the hypocrisy of MORENA.
The anti-Covid vaccination process accelerated shortly before the election, when people younger than 60 and even younger than 50 suddenly got opportunities to get injected. Whether this was a ploy or reflected the opportune arrival of hundreds of thousands of doses is hard to tell. The president made some predictions (or promises?) on the eve of the first vaccinations in late December that were ill-founded but seem to have been fulfilled anyway: he said that vaccinating the majority of the people over 60 would reduce Covid deaths by 80%. This was apparently based on data from the U.S., where the vast majority of the deaths have been in the older population. Mexico, however, was plagued from the beginning with many casualties in the under-60 and even under-40 population. But yes, the caseload does seem to have fallen by about 80% (though there are no reliable statistics). This may be due to a large percentage of the population having been vaccinated, plus, as the government finally started to say recently, a kind of herd immunity achieved because almost half of the population has already had Covid (even though confirmed cases are few, less than two million, thanks to a lack of widespread testing in the first nine months or so of the pandemic). Several state governments, including that of Mexico City (roughly equivalent to a state) announced that the Covid semaphore would turn to green in three days—just after the election. Coincidence? While Mexico has a much lower vaccination rate than the U.S., it has more people vaccinated than most developing countries, thanks to a policy of playing the U.S. against its Chinese and Russian “enemies” in order to get as many vaccines as possible from each of them.
Outside of Mexico City, a creepy thing happened in recent months. The parties have candidate selection processes that don’t include primary elections and usually are based on highly manipulable surveys. The party apparatus selected senator Félix Salgado Macedonio to be its gubernatorial candidate in Guerrero. Guerrero is home to beaches like Acapulco and Zihuatenejo, but also of the 43 missing students of Ayotzinapa and of a guerrilla movement in the ‘60s and ‘70s that was built around students and teachers from the various teachers’ colleges in the state. It is one of the poorest states in Mexico. Salgado Macedonio is a swaggering populist who was at one time mayor of Acapulco. Around the time that he was close to being named as candidate for governor, it surfaced that over the years he had been accused of rape various times and that on at least one occasion the case was quashed by a prosecutor who, though of a different political party, didn’t want to bring disgrace on the system. Obviously, young Mexican feminists commenced to do what they do best, tear things apart, and the pressure was on for a prosecution and for the party to replace the candidate. Neither happened but AMLO still felt the need to defend “Felix” against a “political lynching.” An analysis of June 6 voting patterns by gender would probably reveal a huge loss of votes for MORENA for this reason alone.
The Instituto Nacional Electoral (INE), which is not a respectable neutral body (as the right would have it) but is not a full-time anti-AMLO conspiracy, either, got involved. The INE could not annul his candidacy based on accusations but did disqualify him (and other candidates in various states) for excess spending in the “pre-campaign” period. The party bosses cried that they were being persecuted and denied their habitual violation of pre-campaign rules. Felix told fans not to worry, that his daughter would be the candidate. And guess who won the survey and the election?