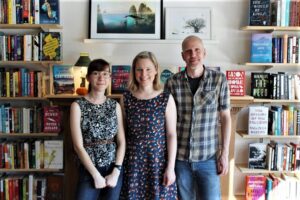 When you live in south Minneapolis, your only knowledge (if any) of Highland Park in St. Paul may be Ford Parkway and its mostly upscale businesses. That’s because Ford Parkway is accessed via the bridge over the Mississippi River which is at East 46th Street on the Minneapolis side. But Highland Park is a huge neighborhood compared to any Minneapolis neighborhood, and even coming from Minneapolis there are other ways to get there.
To the south, you could cross the river on state Highway 5, accessing that from either the Crosstown (Highway 62 eastbound) or Cedar Avenue and Highway 77 southbound. This will get you to West 7th Street in St. Paul, another main road with lots of businesses and restaurants on it. Or from the more northern end of south Minneapolis, you could cross the river on the Marshall Avenue bridge (Lake Street in Minneapolis) and then head south on one of the major cross streets such as Cleveland Avenue.
So, broadly speaking, we will now look at the business scene north of Ford Parkway, south of Ford Parkway, and along Ford Parkway, but saving all the dining and drinking establishments for the end. Oh, and before any of that, grocery stores. 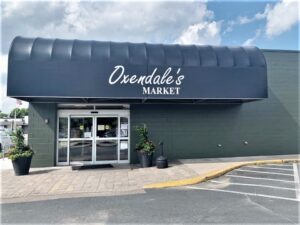 Oxendale’s on Randolph, with fresh paint by Brushed Monkey in July 2020

On Ford Parkway itself, there is a Lunds & Byerlys. This was the first business I ever patronized in Highland Park, not counting Baker’s Square, where I only went as a guest and not on my own. Lunds & Byerlys are all a lot the same, don’t you find? It’s very convenient too. There is also a tiny Target on Ford Parkway, but it’s so tiny, you could probably find more grocery choices at the Walgreen’s across the street.
South of Ford Parkway, along West 7th Street, there are several grocery stores, probably more than the ones showing on my map. (I have explored West 7th but it’s easy to miss stuff when you’re driving.) I should mention that not all of West 7th Street is in Highland Park, because the adjacent neighborhood to the east is called West Seventh and includes about two-thirds of its length from the river to downtown St. Paul.
There is a co-op, a branch of St. Paul’s largest one, Mississippi Market, on West 7th, but I think not in Highland Park. In Highland Park on West 7th, there is an Aldi. There is also a small Ethiopian market on the ground floor of the Sibley Manor Apartments, according to Google Maps. It might be worth it to check that out. North of Ford Parkway, there is a branch of the hyperlocal chain Oxendale’s on Randolph Avenue, and there is a Trader Joe’s at 484 Lexington Parkway. So, quality more than quantity. 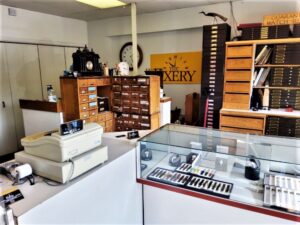 There are lots of interesting businesses north of the Parkway, especially along Cleveland Avenue, up to Randolph, which is the northern boundary of the neighborhood. Just north of the Parkway, practically on it, are a row of businesses that have all been there for many years, some longer than others. One is the Highland 1 and 2 (Mann) Theatre (cinema). You’ll be happy to hear that like other movie theaters, it is open more or less as before the pandemic. Check the web for shows and times. On Tuesdays, tickets are only $5 all day for everyone.
Another is The Fixery, a nice old-fashioned watch repair place. It’s been in business for 40 years in this spot. The Fixery is the place to go for expert repair of all types of watches, from mechanical to quartz, providing on-location, in-house service, including battery and band replacements. They also work on clocks and jewelry items, and can repair or replace broken clasps on necklaces, bracelets, etc.
This corner of Ford Parkway and Cleveland Avenue saw a lot of looting going on the last couple of nights of May 2020, and unfortunately The Fixery was one of the victims, along with a nearby jewelry store, R.F. Moeller, and a Verizon mobile shop. Mark Wilsey, a Fixery employee who has worked there for 27 years, being hired right out of high school when his father also worked there, set up a GoFundMe page which got amazing support from neighbors, other staff, and customers. This was credited with saving the business, which would have otherwise had to close.
Finally in this group is a relatively new concern, Menchie’s Frozen Yogurt, which sells yogurt soft-serve as well as sorbet in numerous yummy flavors. Across Cleveland Avenue is Quixotic Coffee, my personal favorite St. Paul coffee shop.
There is a gym-type of thing called Alchemy 365. This is a national chain, and they have a unique training regimen that combines yoga, cardio, and weightlifting all in one session. They are now operating in dual mode, having reopened some time ago, but retained their on-demand virtual classes. You can subscribe only to the on-demand without being an in-person member.
Down Cleveland Avenue a bit, across the road from the St. Catherine’s campus, you will find Sister Rosalind’s Massage, which is run by an actual nun/massage therapist. She says there is no contradiction in Christian ministry and massage therapy, and I heartily agree. It’s not just her, there is a whole staff of deep tissue massage, chiropractic and acupuncture providers, and a second office in Burnsville. They all acknowledge a spiritual calling, however, and will optionally offer prayers before and after the treatment.
Right on the northern edge of the neighborhood, there is an independent bookstore that actually opened in 2020 and lived to tell about it. It has a great name too – Storied Owl Books. Can’t tell you much about it because I haven’t visited yet, but you bet I will soon. 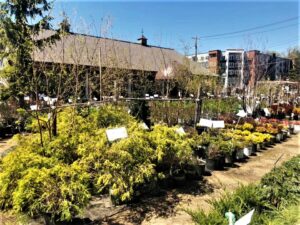 Small trees for sale for Arbor Day at Highland Nursery

On West 7th Street you will find the garden center known as the Highland Nursery. They are now open seven days a week for in-person browsing and shopping. Although you can’t use it for online shopping, they have an interesting website. The merch is divided up into broad categories like Flowers, Herbs, and within flowers, into Annuals, Wildflowers, etc. On the corresponding pages, you can download an inventory list (without prices). If you are looking for an item not on the list, you can “click the pencil” and leave them a request. Highland Nursery is a true family business, being currently run by the daughter of the original owners, along with her daughter and granddaughter.

On Ford Parkway
With three or four strip malls just in one half-mile stretch of Ford Parkway, there are way too many businesses to cover them all. We’ll highlight a few that we like (not an exhaustive list of the ones we like, even).
Three establishments are among the public’s favorites. One of them I cannot visit because of my death-cleaning project – I cannot buy cute things. This is the classy gift store Patina. But the other two I will be visiting shortly. One is Schuler’s Shoes, which I will visit because I have been wearing the same pair of sandals for 18 months now and that’s not good. The other is Half Price Books. Yes, I know it’s a chain. I am hoping to sell some stuff to them. They have one of the best buying policies – fair and clear – of any used goods store. 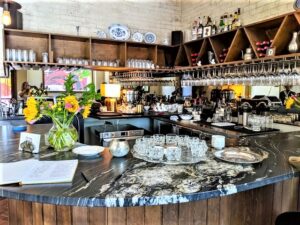 As it happens, all the restaurants I have room for are on Cleveland Avenue or very nearby. One that’s in that same little section as The Fixery, is Vina, a venerable and still excellent Vietnamese restaurant. There is now a second location of this restaurant in Richfield. Despite being very snug, they’re open for indoor dining – or takeaway.
Not too far north of there is another place that’s been in the neighborhood forever, even more forever in fact. I just visited it for the first time in ages last week. This is Cecil’s Deli, a good old-fashioned deli/diner with all your favorites, including house-made soups and breads, and Jewish deli standards like latkes, blintzes, and bagels with lox. They brew their own iced tea, too, always a plus in my book.
The last one is one I have not had a chance to visit yet, as it just opened earlier this month. Myriel is on Cleveland Avenue, but not technically in 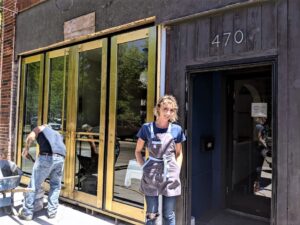 Highland Park; it’s just a block or so north of the boundary. It’s named after the kindly bishop in Victor Hugo’s “Les Misérables,” and is the conception of Karyn Tomlinson, a wildly popular local chef. There is a website for reservations – myrielmn.com – but you can’t see the menu online. A recent preview piece in Mpls.St.Paul magazine by Stephanie March described the food (in the chef’s own words) as “old peasant French meets New Nordic.” (They have egg coffee, if that’s your thing.)