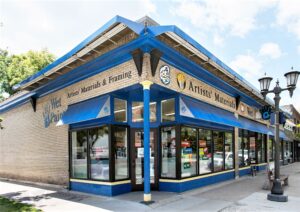 Grand Avenue is not like most of the other major thoroughfares we write about. It’s the only one with two esteemed liberal arts universities on it. Which may explain why it has no less than three independent bookstores on it as well. Also, although in terms of wealth and clout, Grand Avenue sits in the shadow of the much grander Summit Avenue to its north, the neighborhood it’s a part of is called Summit Hill. But not everyone in the neighborhood knows that, apparently. I was amused by a furious commenter on the story I will get into later about a proposed development on Grand. The nearby resident had been infuriated to have read a previous comment, signed by a member of the Summit Hill Association board. How dare a resident of Summit Hill have an opinion on this issue! he raged, unaware that he himself lived in Summit Hill and that the board in question represented him as well.
Starting at the western end of Grand Avenue, St. Thomas University’s main campus also has a riverfront. Like, I assume, most respectable universities (sad that one has to make that distinction these days) they have grappled with how 2021 can counter the missed classes and other uncertainties of 2020, now that there’s a vaccine, but also a Delta variant. Back in June, they were saying that they would not require a vaccine for students or staff, but would incentivize them, with tuition cuts, gift cards, extra time off for staff, etc. and make it easy, by having an efficient, free vaccine site on campus. They also said two things that were portentous in hindsight. They would require everyone to disclose their vaccine status confidentially, and they would reserve the right to change the policy if it looked necessary. Recently it looked necessary, so now they are requiring vaccines to return to campus.
A bit east, with its northeastern corner of campus at Summit and Snelling Avenues, is Macalester College. Bigger and more famous than St. Thomas, Macalester was founded on a very small scale in the 19th century with a view to becoming an Ivy League-type institution in the Midwest (a goal it has pretty much attained). Originally endowed by the Presbyterian Church, it has been secular in nature from the first, but strongly committed to internationalism and liberal values. Still, obviously that did not make it any more immune to COVID than the most hard-scrabble small business on Grand Avenue. Macalester instituted a vaccine requirement earlier, in mid-June. Like St. Thomas and most other universities, they currently are planning to have on-campus living and in-person classes for the most part when school reopens in September. On Aug. 5, their mask policy was updated to apply to vaccinated people indoors.
Another industry besides education that has been hit badly by COVID is performances. Movie theaters, as well as live theater, concert venues, and others, were of course shuttered for long periods. The beautiful historic Grandview is a Mann Theatre these days, and it is open once again. Can’t say for how long, obviously.
Personally, there was one “industry” that I missed terribly during the pandemic and am still missing. Even though I’m vaccinated, these words, from a liability waiver that most dentists add to your check-in procedure now, give me pause:
“Due to the frequency and timing of visits by other dental patients, the characteristics of the virus, and the characteristics of dental procedures, there is an elevated risk of you contracting the virus simply by being in a dental office.
“Dental procedures create water spray which is one way the disease is spread. The ultra-fine water spray can linger in the air for a long time, allowing transmission of the COVID-19 virus to those nearby.”
I guess you have to be desperate for treatment, and be a bit of a gambler. (I am not!) But yes, it’s great to know there are dentists out there, taking an even greater risk (see Probability 101) than their patients, for those that can’t wait. Check out Grand Avenue Dental if you’re not reassured by your present dentist, or don’t have one, and need to see one. Particularly check out the page under COVID-19 Precautions. They’re basically treating a dental appointment like an invasive operation (which it sort of is) and sanitizing everything, even the invisible air, between patients. That is reassuring. 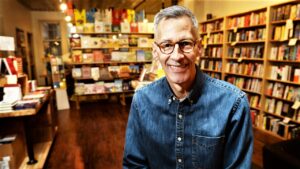 So what about those three independent bookstores? Well, they could hardly be more different. We’ll start with Next Chapter Booksellers, both because it sits adjacent to the Macalester campus and because it’s the largest independent bookstore in the state. Next Chapter has been in this space near the corner of Snelling and Grand Avenues since 2019, when it bought out Common Good Books. They sell new and best-seller titles, plus audiobooks, stationery, journals and sketchbooks, and booklover paraphernalia. They sold online exclusively for many months, and now offer seven day a week in-store browsing, curbside pickup or limited free delivery with online orders, or if outside the delivery area, USPS media mail shipping, which is free on orders over $50.
Next Chapter also has lots of author and book events such as launches, readings and book signings. These too were virtual for a while, but in-person events are coming back for now. Another bookstore, Red Balloon Bookshop, also has events now. (Both of these large modern bookstores have excellent websites where you can 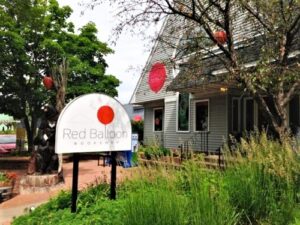 check their calendar or sign up for an email newsletter.) Red Balloon specializes in new and best-selling titles of children’s and young adult books. They also sell related products such as toys and art supplies.
Against the Current buys and sells used books, including rare books and collectible volumes, as well as good used book bargains. Against the Current only started from scratch in 2017 (i.e., not taking over an existing book business) and was just hitting its stride when COVID hit. A one-man operation run by founder Hal Johnson, the store was unfortunately closed temporarily for what turned out to be at least a year. (It’s reopening in slow stages, so it’s hard to say exactly when.) Nowadays, Hal is in his (closed) shop most weekdays, getting the inventory in order for a more full reopening. He is open for real on Saturdays, and will probably let you in to browse if you happen to catch him there on other days. You can also contact him by phone or email to inquire about books and make an appointment to pick them up. (There is a website with contact details but no online ordering.) He is planning to go to five days a week soon and for the foreseeable future. 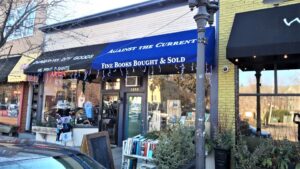 Yet another reason Grand Avenue is so fun, somewhat in the same vein, is the amazing art supply store Wet Paint. I visited that shop a few years ago in my explorations for Grand Avenue, and it is a peak shopping experience. If you have a creative bone in your body, chances are it will inspire you to take on some new project and make something.
A shop on Grand Avenue that I visited some years ago is a great one for DIY home decorators. It’s also a go-to supplier for professional home improvement contractors doing walls or flooring. This is Abbott Paint and Carpet, where I was sent by my handyman to choose colors, back in 2013. This venerable business has been there for 76 years. Its founder passed away in 2016 and it’s now run by his four sons.
Before we finish up with some quick restaurant lists, if you like Dixie’s on Grand, or have not been and want to try it out someday, you should go soon, because it won’t be there much longer. The owner, Peter Kenefick, who is also the proprietor of Emmett’s Public House and the landlord to Saji-Ya, all on the same site, is the owner of the underlying land. Kenefick worked with Minneapolis-based developer Reuter Walton to replace the three restaurants and large parking lot with a five-story apartment building which challenges the current height limitations on Grand. The new 695 (Grand) building would also house four restaurants, including Emmett’s Pub, Saji-Ya, possibly an iteration of Dixie’s with a new name, and a currently unidentified restaurant.
There is extensive resistance and outrage from the community with opposition percentages reportedly 10-to-1 against this specific plan. A detailed list of critical concerns can be found (at https://abetterway-stp.com/ and https://abetterway-stp.com/abetter-way-video/) along with a video of the current proposal that includes an alternative design which would better serve environmental, community, and architectural values, and render the requested variances unnecessary. 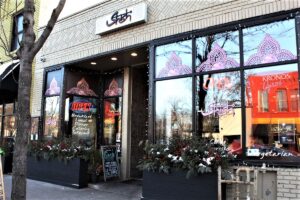 The St. Paul City Council was scheduled to make its decision to approve or disapprove the current plan at its meeting on Aug. 11. However, the process was extended for one week, until Aug. 18, to allow council members more time to do a thorough review of project documents.
Some restaurants on Grand Avenue I want to try: Shish (Middle Eastern) and Everest on Grand (Tibetan, Nepali and Northern Indian). And I would quite like to revisit Davanni’s Pizza. We used to have Democratic Socialists of America socials there, back in a simpler time. 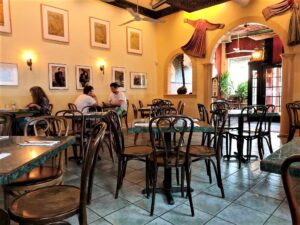 Let us finish up with Khyber Pass Café, a venerable restaurant that has been in business more than 35 years, and survived COVID, although it was touch and go for a while, like so many. It is owned and run by Emel and Masooda Sherzad, a couple who were both immigrants from Afghanistan but met here. The restaurant serves Afghan cuisine, similar to but different from the cuisine of its neighbors to the south, Pakistan and India. Given that I have a sister who is an Afghan-theater veteran, and raves (positively) about the people, food and culture, I am disappointed with myself that I’ve never been there yet, but mean to remedy that soon.