Markets indoors and out, square donuts, sushi and more 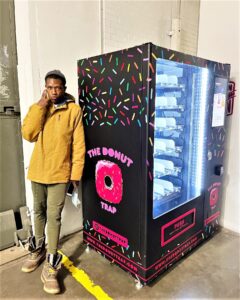 Bradley Taylor and his Donut Trap vending machine outside Can Can Wonderland in St. Paul

Closings in food and drink

From Racket.com and other sources we learned that Tin Whiskers, one of the original artisanal Minnesota breweries, is closing this year. Buy up their inventory while you still can, if you’re a fan.
From Mpls.St.Paul Magazine, we learn that 35-year Dinkytown veteran Camdi is closing. Thai and other southeast Asian restaurants still proliferate, but sadly (to me) Vietnamese ones become ever harder to find.

Openings in food and drink

But maybe I’m just looking in the wrong place. Que Viet is a family-run restaurant in Northeast Minneapolis that’s renowned for its State Fair egg roll stand. A daughter and daughter-in-law of the family will open a small extra location in a former used bookstore space in St. Paul. It will be called Em Que Viet (Em is Vietnamese for little sister). No date was given.
Centro, a taqueria in Northeast Minneapolis, will open an expansion in the former Wedge Table space on Eat Street (24th and Nicollet).
Provision Community Restaurant, a communal seating, pay what-you-can cafe that’s a sort of mash-up of a soup kitchen and a fancy restaurant, is re-opening “sometime in the spring of 2022” according to a late March article in the Eater Twin Cities.

J. Selby’s, the excellent plant-based casual food diner on Selby Avenue in St. Paul, will have already re-opened its indoor dining room by the time you read this.
Asa’s Bakery in their new location of 5011 34th Ave. S. is also already – finally – open. They were razzed by some bright spark on Twitter for only being open “nine hours per week” or something like that, but give them a break, they are ramping up hours gradually. In fact, as of the end of March, open hours are 7 a.m. to 2 p.m. Thursday and Friday and 8 a.m. to 2 p.m. Saturday and Sunday (although they close early if sold out, which does happen).
Sea Salt Eatery has announced April 15 as their 2022 season open date.
Another bit of good news is that Reverie, with its entirely plant-based, made-from-scratch menu, will now also be open for lunch Monday through Friday from 11 a.m. to 4 p.m., beginning April 25. Watch their website or follow their social media to check out their new lunch offerings, which will include a mix of their popular brunch and dinner fare as well as some all-new menu items. 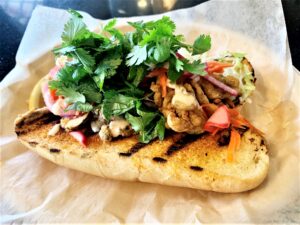 The Indigenous Food Lab is surrounded by boards and appears to be a hive of construction-related activity as it is being transformed into an actual lab and training center. Look for a grand re-opening later in the spring.
A similar project is underway that is projected to be completed near the end of this year. A project of the Cultural Wellness Center, one of the nonprofit “owners” of Midtown Global Market, Culinary Heritage will be a culinary center focusing on ancient grains of Africa. They will have demonstrations and cooking classes featuring these healthful grains, and also do regular food delivery to elderly people, especially those of African heritage.
And an $800,000 project is just starting to install a “beauty hub” in the Market, where in addition to threading, now available at Leila’s Brow Art, patrons will be able to get haircuts, pedicures and other health and beauty treatments. How is this food-related? It’s hoped that the extra foot traffic and income for the market will help save the sometimes-precarious current food vendors from going under, or the market as a whole from becoming unsustainable. 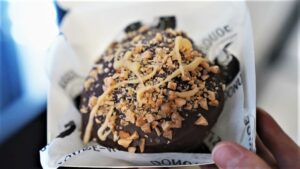 Square donuts! How did I miss this?

A young entrepreneur named Bradley Taylor has been making waves for several years with his square donuts and his food truck to vend them. The existing business was called Sssdude-Nutz, and during the pandemic, mostly focused on selling at farmers’ markets.
Now Taylor has a new gig, called the Donut Trap. He’s still selling square donuts, with “sexy” and innovative flavors and names, but now they are available from a high-tech vending machine. Just the first of many to come, the vending machine now sits in a hallway just outside of Can Can Wonderland, 755 Prior Ave., St. Paul.

Farmers’ markets do continue through the winter, some indoors, some outdoors. But the “real” farmers’ market season is late spring through late fall, and is a vital part of spring and summer in my book. Midtown Farmers Market, my own “home” market, debuts Saturday, May 7, at a new parklet located at 2225 E. Lake St. Ready-to-eat food and coffee vendors will include Kabomelette, Krishna’s Delight, Curioso Coffee, RISE and Stepwise Coffee.
St. Paul’s season will get a slight jump on us, with a kickoff date of April 23, 2022.
Other south Minneapolis markets include the threesome run by the nonprofit Neighborhood Roots – Kingfield (Nicollet Avenue), Fulton (Chowen Avenue) and Nokomis (Chicago Avenue). Nokomis Farmers Market will be on hiatus for all of 2022. The other two are expected to announce opening dates soon.
Another great market is the Four Sisters Farmers Market on Franklin Avenue, a project of Native American Community Development Inc. (NACDI). This small market is a major outlet for the produce of another Native American project, Dream of Wild Health, a youth program that operates a farm outside the Twin Cities for Native American kids. They sell truly awesome products that you can’t get at other markets. (Dream of Wild Health is also a sometimes-vendor at the Midtown Farmers Market.) NACDI has not announced an opening day for this year’s market yet.
The main market for the city of Minneapolis is the municipal market in the “Lyndale sheds” in near North. They shift to summer hours in May. They operate a market on Nicollet Mall downtown also, but no opening date for that has been announced yet.

Sometime in the past couple of months (no one can remember the exact date) the Seward Co-op turned 50 years old. They are therefore just celebrating their birthday all year. So the CSA (Community Supported Agriculture) Fair, which is always a joyful event, has extra celebratory power this year. It will also be the 21st CSA Fair for Seward, which adds to the symbolic significance of the event.
“This year is the return of our in-person fair, held on Saturday, April 23 from 11 a.m. to 2 p.m. in the Seward Co-op Creamery parking lot at 2601 E. Franklin Ave. If you can’t make it, browse our CSA Farm Guide (seward.coop/csa_fair) for a virtual fair experience!“ 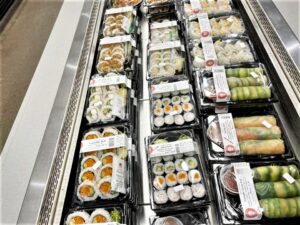 The search for affordable sushi

I love sushi. My daughter loves sushi. My granddaughter loves sushi the most. We are all always on the lookout for excellent, affordable sushi. The last time I had sushi at a grocery store (I’m not going to say which one because they should have known better) I was incredibly disappointed that I spent almost as much as one would in a sushi bar, but the tuna in this bog-standard Spicy Tuna Roll was so miniscule that it was almost not there.
Someday, I may splash out and get a sampling of the same sushi from my several top sushi suppliers, including some fancy restaurants, some fast-food places, and a few grocery or convenience stores, and do a head-to-head tasting. But I haven’t done that yet, so I only have a vague and unscientific idea of my own “best sushi” and “best for the money sushi.”
I have had decent sushi at Masu, Bagu, Sushi Train and Soberfish, so they would be in the running. I have been to Kyatchi, but I had something else there. I know there are several strong contenders in Minneapolis that I just haven’t gone to yet.

Mini-review – a brief day out at the Midtown Global Market

I had a brief trip to the Midtown Global Market (MGM) in early March and I was craving sushi. The previous week I had tried, in a state of near desperation, to order sushi delivered from Intown Sushi in the MGM and my order had been in for over half an hour when Bite Squad called me to tell me that Intown Sushi was closed and they couldn’t do the delivery.
They didn’t specify whether they were just closed for the day, maybe due to a staff shortage, or a failure to update their hours on the website, or closed for good, so part of my mission in going there was to find out. Thankfully, it was not closed. I had a very nice Tuna-cado Roll (eight pieces) for a very reasonable price. I have also had their Tuna Poke and their Seaweed Salad side dish in the past, all highly recommended.
Then my friend and I cruised the market to see what else was up. I also wanted to stop by The Kitchen by Baked Brand, to check out their drinks and juices. (I can’t eat two meals back-to-back, so I’ll have to revisit them to check out their main dishes.) I got a Banana Cream Pie Bowl to go. This was a little less successful for me. But it would definitely appeal to anyone who loved the original on which it is based, the southern U.S. standard banana cream pie. It had that nostalgic whiff of ripe bananas and Nilla Wafers. There is something vaguely unworldly about the sweet creations of Baked Brand. More investigation is warranted here as well.