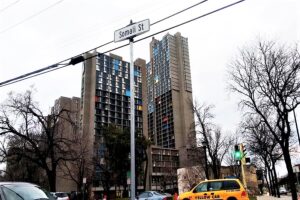 Cedar Avenue – geography and history, with a side trip to Somalia

Geographically, Cedar Avenue is a lot longer than you might think. Its northern terminus is now at Seven Corners where it ends in a T-intersection with Washington Avenue South. But at one time, what is now the 10th Avenue Bridge crossing the river was Cedar Avenue.
Going south, you probably already know Cedar Avenue becomes Highway 77 at the city line between Minneapolis and a corner of western Richfield. But did you know that, as Highway 77, the road stretches all the way through Apple Valley and then continues on through Dakota County as County Road 23, finally ending in Northfield? In Minneapolis, Cedar Avenue is also Hennepin County Road 152.
In 2020, Cedar-Riverside was named one of seven “cultural districts” by the city of Minneapolis with the purpose of promoting racial equity and economic growth and preserving cultural identity. Earlier, in 2015, then-council member Abdi Warsame proposed and won a name change for three short stretches of streets in Cedar-Riverside that also served to highlight and preserve the cultural identity Cedar-Riverside now has as a new hometown for East African immigrants, especially those from Somalia and Ethiopia. The new street names were Somali Street, Oromo Street and Taleex Avenue.
The name Taleex was new to me, and curious as I am, the excellent coverage at the time in the South High Southerner only piqued it further:
“Taleex (pronounced ‘taleh’) is a small city of great cultural significance in Somalia – it was the capital of the Dervish state, a Somali anti-colonial government that fought Britain, England and Ethiopia.”
This led to me falling down the usual internet rabbit hole and learning masses of information (of which I will probably retain only a small amount) about Somali clans and Somali history from late colonialism to the present day. Sadly, space does not permit me to share it all here, nor do I think most of you would read it, except for the history geeks. (Start with Wikipedia and follow the citations.) The condensed version is that the Dervish movement was active from 1899 to 1920 and, although it ended with a terrible defeat at the hands of British air strikes, it can be said to have led eventually to independence and the modern Somali nation, as well as having a major influence on 20th-century Somali poetry. 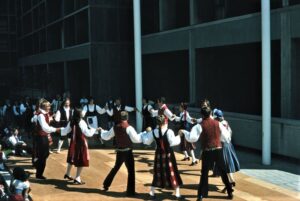 Swedish folk dancing at the Snoose Boulevard Fest in 1975

The Cedar-Riverside area, or the West Bank as the wider neighborhood is known, is rich in history. It has always been and still is a magnet neighborhood for immigrant communities. Its history and character have also been influenced by the presence of a sizable chunk of the University of Minnesota campus, and the entirety of the campus of Augsburg University. Augsburg has
created an online history resource on the history of the West Bank which you can view at digitours.augsburg.edu/tours/show/1.
In the late 19th and early 20th centuries, the immigrants inhabiting the West Bank were mostly Swedes, Norwegians and Danes. As well as alcohol, the working men of this community liked to indulge in “snus,” a form of tobacco similar to snuff or chewing tobacco. This gained Cedar 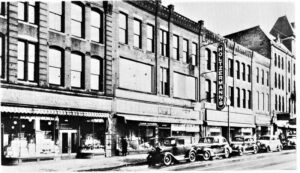 Avenue the Swedish nickname “snusgatan,” translated as Snoose Boulevard.
In the late 1970s through the early 1980s, the West Bank was the home of student activists, hippies and political movements, with a coffeehouse culture and the rise of food co-ops. The film “The Co-op Wars,” released in 2020, has some excellent footage of this period related to the founding of food co-ops in the area. But these people also had an interest in working-class history and culture, which led to the existence, from 1972 to 1979, of the Snoose Boulevard Festival, which celebrated Scandinavian folk music and dance.
This period also saw the rise of youth culture retail such as record stores, with the original Electric Fetus being located at 514 Cedar Avenue. The building housing it burned down on New Year’s Day in 2014 and was covered by Southside Pride. It was one of the first pieces I wrote for the 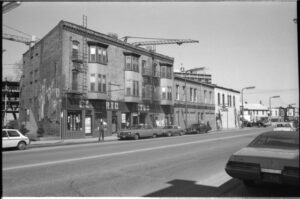 The original site of the Electric Fetus record store

paper, in fact. southsidepride.com/2014/02/02/new-years-day-tragedy-on-the-west-bank
The West Bank today mixes the remnants of the area’s cultural history with the day-to-day needs of the newer communities living there. A few bars still remain, coexisting with mosques, just as the older generation coexisted with Temperance Christians, while the former West Bank Co-op is now the West Bank Grocery and carries East African staples. Somali and Ethiopian shoppers can wire money to Africa, watch the BBC World News with subtitles in shops and cafes, or get henna decorations for holidays or weddings.
One iconic longtime business on Cedar Avenue is May Day Books at 301 Cedar Ave. It was founded in 1975 and moved to the present location in 1990. (Their wonderful motto: “Not making a profit since 1975.”) May Day Books has a great website, very old-school but thorough and informative. They also have a wide selection of merchandise for such a tiny space.
Other cultural institutions that have been around for 30 years or more include one music venue and two theater companies. The music venue is the Cedar Cultural Center, familiarly known as The Cedar. They feature an eclectic selection of musical acts unmatched in the city, with a focus on folk and world music. Check The Cedar’s website for their summer and fall offerings, including Nathan & The Zydeco Cha Chas with Minneapolis’s own Brass Messengers performing on Saturday, Aug. 6.

Theatre in the Round features a completely surrounded stage, a format challenge that draws many talented directors and enthusiastic audiences. The interesting building Theatre in the Round inhabits is over 100 years old, and the company itself is 70 years old. They just finished their 70th season in June, so visit their website to see what’s coming up in the fall.
Mixed Blood Theatre is not quite so old, but is also a highly regarded and award-winning theater showing new works with a multiracial focus. It was founded in 1975 by artistic director Jack Reuler, who is retiring this year and handing over the leadership to Mark Valdez.

A food tour of Cedar Avenue

A lot of interesting food can be found along the stretch of Cedar Avenue. On the West Bank is one place that has been featured on the Food Network’s “Diners, Drive-Ins and Dives.” This is The Wienery, noted for its fast but lavish breakfasts, as well as its many sandwiches featuring various kinds of “wieners.” In recent years, they have added vegan hot dogs and other more eclectic offerings.
Another West Bank breakfast spot is Hard Times Cafe. Its two claims to fame are a vegan menu and being run by a worker cooperative. (It used to also be known for its hours of 5 a.m. to 2 a.m., but since reopening after a long pandemic closing, it’s now open 8 a.m. to 8 p.m., which is still pretty good for a cafe.) While we’re on the West Bank and the subject of food, let us note that Afro Deli has returned to a new location just a block from its original one on Riverside. 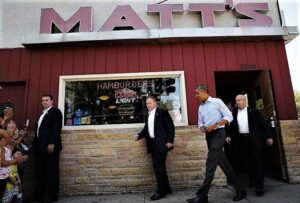 President Obama leaving Matt’s Bar during his visit in 2014

Another star of TV’s “Man v. Food” and “Food Wars” is found a bit farther along Cedar Avenue at 3500 Cedar. This is Matt’s Bar. It also has two other claims to fame that I know of. First is that it IS the original home of the Jucy Lucy, I’m sure of it. The other is that it was one of two places Barack Obama went to on his two-day visit to the Twin Cities in 2014.
Another spot on Cedar Avenue, just north of 42nd Street, that probably ought to be on “Diners, Drive-Ins and Dives,” is the Cedar Inn. It remains wildly popular with its basic (in a good way) neighborhood bar and grill atmosphere and the patio dining area, which they added during the pandemic. They also have takeout and delivery, a cricket team (!) and a highly active Facebook page.
A bit farther south, at 4705 Cedar Ave., is Carbone’s Pizza & Pub, a longtime neighborhood favorite for pizza, pasta, calzones and other Italian specialties. They also feature broasted chicken, hoagies, wings, fresh salads and an excellent selection of beer and wine. This family-friendly pizzeria also has a large patio and live music on the weekends. Besides dining in, you can also pick up your order to go, or have it delivered. Carbone’s also does catering for parties, meetings and special events. 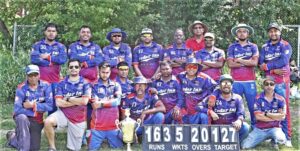 Just south of Franklin Avenue on Cedar is the housing project known as Little Earth. This unique federally-funded housing community is home to Native American families representing over 20 different tribes and nations. It is also a center of political organizing for everything from environmental racism to police brutality.
The unimposing office building with an attractive mural on its side at 36th and Cedar is the site of the law offices of De León, Nestor & Torres. Specializing in immigration law, criminal defense and civil rights, they have been involved in many high-profile local cases. Two of the partner attorneys are native Spanish speakers. One of them, Susanna DeLeón, is also known as the founder of the Aztec dance troupe, Kalpulli KetzalCoatlicue.
A couple of particularly good service businesses are found along Cedar Avenue’s mostly residential stretch from 38th Street to Minnehaha Creek. The first is Cedar Avenue Repair at 4301 Cedar Ave. This small shop does all kinds of auto repair for reasonable prices. Since I have been in the area (11 years now!) I have used them several times and their service has always been reliable and courteous. Highly recommended.
The other service is Soderlin Plumbing, Heating and Air Conditioning, a family-owned and operated business serving South Minneapolis and the metro area since 1914 – over 100 years! It has a lot of champions on the neighborhood forums, an A+ from the Better Business Bureau, and great customer reviews. They offer flat-rate, no nonsense pricing with no surprises, so you’ll know the price before they start work on your project. Check out their website at www.soderlin.com for seasonal special offers and online coupons.